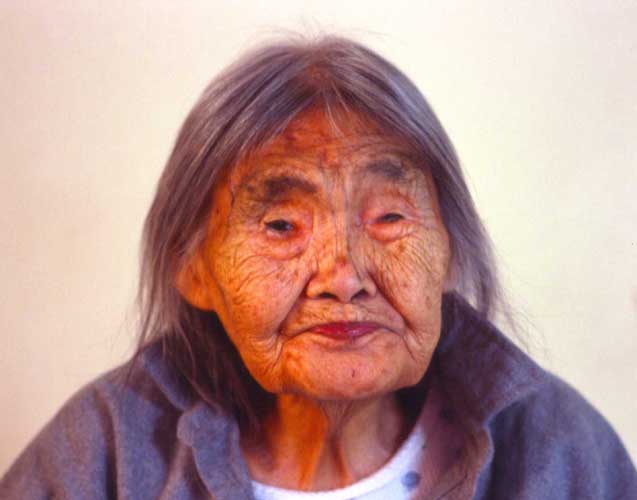 Mabel Toolie of Savoonga. Her only tattoos, received ca. 1920, are on the nose and called atngaghun. Nose tattoos were always the first tattoos to be placed on women, usually at puberty. Mabel’s parents forbid her from getting other tattoos and she said she “cried for days” because she couldn’t be marked like her girlfriends. 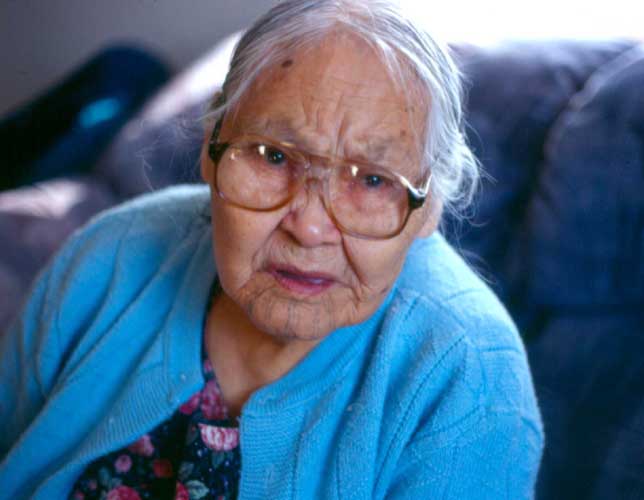 THE HISTORY OF ST. LAWRENCE ISLAND (Sivuqaq) Yupik tattoo spans some 2,000 years and one-hundred miles of volcanic island rock in the north Bering Sea. Tattoos emerged at a certain place and time in the ancient past and traveled on living bodies for millennia across the frozen landscape. Some tattoos were believed to have had lives of their own, others were medicinal in nature, while still more (individual, family, and community designs) defined social and spiritual forces that shaped perceptions of existence. Anna Aghtuqaayak (Yupik name, Qayaghhaq) of Gambell village, the last fully tattooed woman who died in 2002, said it was easy: “We did it to be beautiful, so we would not look like men. We wanted precious pictures for the afterlife.” The hardest part was lying motionless on the floor while her older sister, Alice Yaavgaghsiq (Aghwalngiiq), stitched the tattoos into her quivering skin!

Sadly, however, as I sit here at Gambell (population 600) on a May afternoon, the future of this once important traditional practice is in doubt, as tattooing has largely disappeared along with its practitioners. For example, since my first visit to St. Lawrence Island in 1997, all of the gatekeepers of tattoo knowledge have died, including eight women who wore tattoos. Alice, the last tattooist and designer, passed away in 2002; and in 2005 the last traditionally tattooed St. Lawrence Island Yupik women – Sadie Sepila (Uyaatuwan, age 96) and Mabel Toolie (Legraaghaq, age 95) of Savoonga – died too.

Tattooing ultimately began to fade when missionaries and modernity arrived at the beginning of the 20th century. Furthermore, as new medical advances became known, tattoos of the medicinal kind were no longer believed to “hold power” or to cure. Chris Koonooka (Petuwaq), a local teacher at the Gambell School stated, “It seems like those folks who were born after 1915 stopped getting tattoos. Some were actually feeling fortunate for not being tattooed and some were feeling ashamed for being tattooed. Perhaps some were embarrassed about their tattoos, as some may have been influenced by the Christianity of those times.”

Anna Aghtuqaayak (Qayaghhaq) was the last fully tattooed woman to live on St. Lawrence Island (nose, chin, cheeks, hands, wrists). She died tragically in a house fire in 2002 at the tender age of 96.”

All of her tattoos were skin-stitched in the 1920s.

Traditional tattooing needles were made from slivers of bone, but as time passed steel needles were used for the “skin-stitching.” According to Mabel Toolie, a very small bag of seal intestine was used to hold the tattoo needle. “They don’t use this needle for anything else, they just keep in there and nobody else is supposed to touch it except the one who used it.” Likewise, a visiting archaeologist in 1928 also noted that the tattoo needle was a dangerous object itself: “When any Eskimo is injured either accidentally [sic] or willfully by any instruments, those instruments, including tattoo instruments [needles], are not used again until the wound is healed up. If death occurs on account of the injury or if sickness results, the instrument will be taken with the body of the dead or will be otherwise destroyed.”

The thread or sinew (ivalu) used for stitching-in the tattoos usually came from reindeer tendons and from the tendons of sea mammals, like bowhead or gray whales. Soot (aallneq) or lampblack along with graphite (tagneghli) mixed with human urine (tequq) were the primary pigments used in darkening the sinew for tattooing. According to Waldemar Bogoras, the late 19th century ethnographer of the Chukchi and Siberian Yupiit, “The oil dripping from a lamp is said to be highly efficacious against ‘spirits,’ therefore it is used by shamans when performing incantations, in drawing magic circles around houses.” Graphite had similar powers, as one Russian ethnologist noted: “The stone spirit (graphite) ‘guards’ [humankind] from evil spirits and from sickness brought by them.”

Urine was powerful too. According to several island elders, “many years ago, urine was very special. [It] scared away the evil spirit.” Nearly 100 year-old Stephen Aningayou (Kiistivik) told me that one night when he was young, he was walking outside Gambell when he heard a buzzing in his ears. He was scared that a spirit was following him on the trail and he did not want to turn and look back, so he quickly began to pee and the spirit disappeared immediately! But urine had other practical uses. Because tequq has a high ammonia content, it helped reduce the scabbing of the new tattoo and promoted healing.

THE FUTURE OF YUPIK TATTOO

There is hope that the younger generations of St. Lawrence Islanders will pick up the art again, especially since they understand that they are losing an important aspect of their traditional culture. This not only includes tattoos worn on human skin, but tattoo knowledge shared by community members and embodied by elders as oral history.

Today, island youth sometimes pencil-in tattoos at annual festivals like Yupik Days. But it’s not really the type of tattoo revitalization that is occurring elsewhere in the Pacific, like in Samoa or Tahiti. However, a few former island residents have gotten ink under their skins, like Darlene Orr, a school teacher in Bethel, Alaska who copied hand tattoo patterns (igaq) from Sadie Sepila several years ago.

A recently dispatched polar bear at Gambell. Remains of an 8.5-meter bowhead whale harpooned off the coast of Gambell. Take note of its eye, which in the old days was removed and used as a charm by the successful whaleboat captain.

All in all, the best way to get a revitalization movement jump started is to reintroduce tattoo knowledge, and to re-examine the indelible history of St. Lawrence Island Yupik tattooing practices before they ultimately disappear. Such an effort solely rests on compiling extant local histories, illustrations, archival documents and photographs into a working volume to be shared that will encourage local youth and other community members to explore and preserve their tattooing traditions for the future. Hopefully, such a book (which I should note has recently been completed by myself and local collaborator Chris Koonooka) will generate just enough interest in the subject of Yupik body arts to contribute to the revitalization of tattooing itself.

Old whale-hunting boats (angyapik) with Gambell Mountain and village in background. The Bering Sea is at far left. Although Savoonga can lay claim to the last tattooed women on the island, it is also the Walrus Capital of the World! 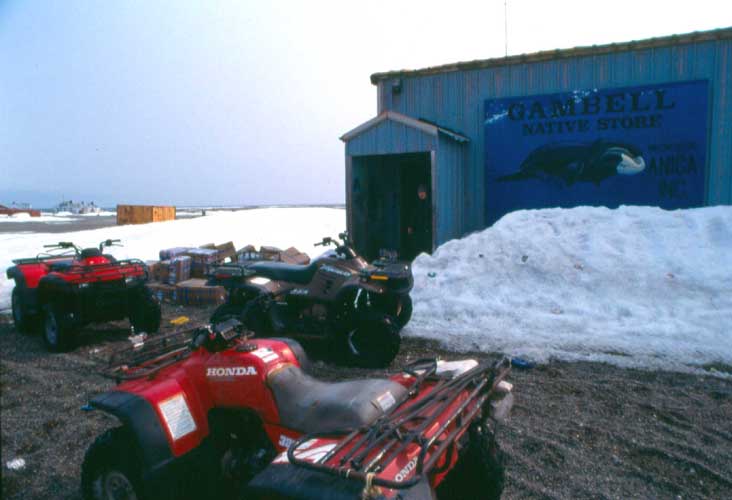 Gambell Native Store, 2003. Have you ever paid 7 bucks for a pack of cigarettes? How about $7.50 for a gallon of milk? Well, you found the right spot!