INSET: The only two Kalinga men who attended the Batok Festival are two “best friends” – Pedro Bangiak (necklace) and our favorite big “Uncle George” Casing. Both were marked for their victories over Japanese soldiers in WWII. Sadly, the number of tattooed Kalinga WWII veterans is decreasing each year. Today there are less than thirty. 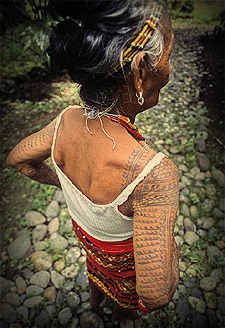 Beautiful fern design tattoos on the back of an elder Kalinga woman’s arm. A centipede crawls across her shoulder. 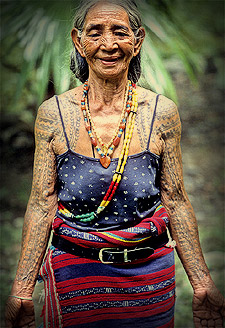 OCTOBER IS INDIGENOUS people’s month in the Philippines and in the northern province of Kalinga local organizers in the city of Tabuk, the capital of the province, hosted a Diddiga (“pride”) celebration to mark the accomplishments of the Kalinga people.  This year’s four-day event was themed “Pride of the Past, Hope for the Future” and showcased the beauty of Kalinga culture through a music and dance competition (Sallidummay), a Chico River rafting experience (the “river of life” in Kalinga), and on the final day a Batok (tattoo) Festival that tattooed Kalinga elder and provincial officer of the National Commission on Indigenous Peoples (NCIP) Miss Naty Sugguiyao suggested “expresses through individual talent, arts, prowess, and strength – the very best of Kalinga.”

The purpose of the Batok Festival was not only to celebrate the artistic achievements of Kalinga tattoo artists and the beautifully adorned men and women in attendance, but to also recognize that this ancient 1,000 year-old cultural practice is vanishing along with the gatekeepers of knowledge associated with it. Fifty-two elders from remote highland communities and the Tabuk area visited the event, including the last Kalinga mambabatok or tattoo artist – the graceful 89-year-old Whang-Od. She along with California-based Elle Festin, Zel, and Gyroe of Tatak Ng Apat Na Alon (“Mark of the Four Waves Tribe”) demonstrated the ancient hand-tapping art of batok for all to experience. Elle also got the mayor of Tabuk (Camilio T. Lammawin, Jr.) involved by inking his first tattoos – a traditional Kalinga designs on his wrists.

To promote the event, Governor Floydelia R. Diasen drafted an executive order encouraging the participation of the entire province to observe indigenous month with the Diddiga as its highlight. It stated that this celebration is “meant to engender the Kalinga’s pride of identity [and] to enrich their foundation to stand on their own ethnicity anchoring their dreams and aspirations to the positive dynamic aspect of culture and time tested traditions. We must not shy away from the lessons we have learned in the old days and let us be proud of our ethnic roots for its from looking back into who we once were that we become more enlightened with where and who we must be in the future.”

The Batok Festival also served as a platform from which to spearhead another historical event in Kalinga – the start of a book project focusing on the unique art form of Kalinga tattoo.

With the help of Manila-based photographer Ivan Sarenas, Ned Sickles a professional photographer and cameraman from the United States, and funding provided by the Daniele Agostino Derossi Foundation, our research team was able to photograph all of the tattooed elders in our midst for the forthcoming Voices of the Ancestors: The Living Tradition of Kalinga Tattoo book. But let me also not forget to mention that our esteemed colleague and German friend Travelin’ Mick (Michael Laukien) is also contributing some of his superb Kalinga images to the project as well, making this a truly international and collaborative affair! 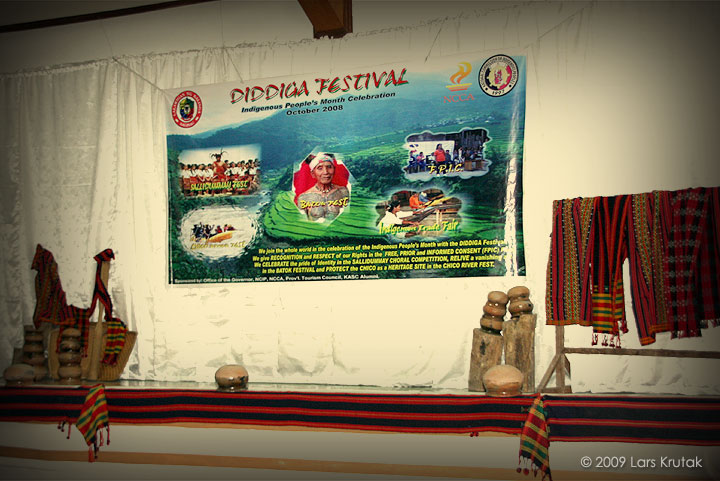 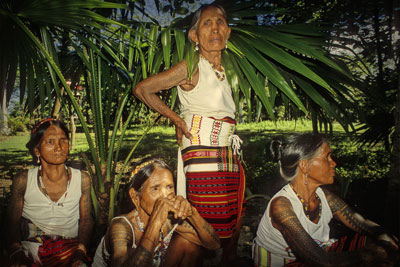 Tattooed Kalinga women waiting for a portrait at the Batok Festival.

The goal of the “batok team” is to produce a beautifully illustrated, bilingual (English/Kalinga), medium to large format book joining the photographic images of the tattooed Kalinga elders to their voices (e.g., oral histories) and Kalinga myths/legends to comprehend the complex meanings behind their intricately beautiful tattoos. It will be fully referenced, indexed, and will include a glossary of Kalinga tattoo terminology. Voices of the Ancestors will be the first book to tell the story of Kalinga batok, the first book to shed light on an incredibly rich cultural tradition that has graced the bodies of the Kalinga since they arrived in this remote corner of the Philippines. 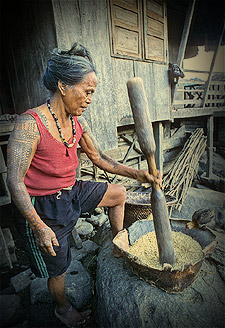 After the Batok Festival, we built upon previous research in the region (e.g., In 2007, some of us stayed in the village of Buscalan for three weeks where the last Kalinga tattoo artist Whang-Od is from) and trekked to seven villages interviewing tattooed elders and local historians about the rich tradition of this largely unrecognized art form. This research is of an urgent nature since there are less than two-hundred Kalinga elders that retain their full-body tattoos, and of these less than thirty Kalinga warriors remain: each of which were marked for their exploits against Japanese forces during WWII. Some of these veterans fought alongside U.S. soldiers in the dense and mountainous jungles of Kalinga Province and this story has largely been forgotten. 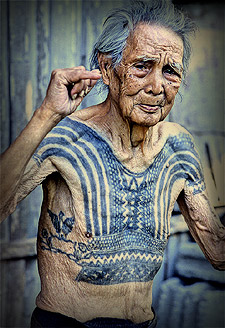 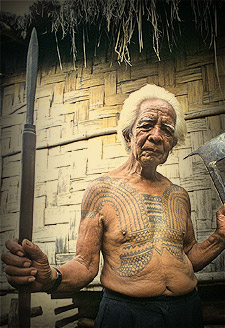 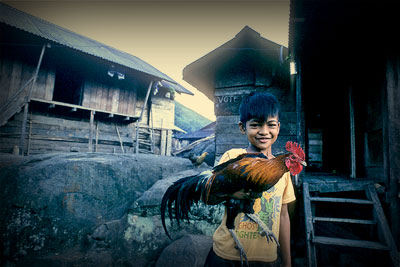 At dawn, a favorite pet calls forth a new day in Lubo village.

After my departure from the Philippines, two Kalinga research teams under the supervision of project co-author Naty Sugguiyao visited more villages in regions that have not yet been visited. They also revisited other areas to follow-up with some of the Festival attendees or interview elders who could not make the trip to Tabuk. The research teams will cover the entire Kalinga region since there are regional variations, meanings, and stories associated with tattoo motifs and methods of tattoo application. For example, the diversity of Kalinga tattoo meanings and designs is quite amazing since villages next to one another may have different names associated with particular tattoo motifs even though they appear to be the same designs. But designs such as rice bundles, steps to rice terraces, fern designs, rattan fruits, python snake scales, and centipede motifs have one thing in common – they are all derived from nature.

THE MEANING OF KALINGA BATOK

Kalinga tattooing is an important vehicle for expressing and reinforcing the psychological dimensions of life, health, warfare, religion, and death. It is a cultural practice deeply rooted within the memory of the Kalinga’s ancestral life and embodies personal, social, ecological, and metaphysical values through a wide array of visual tattoo symbolism. 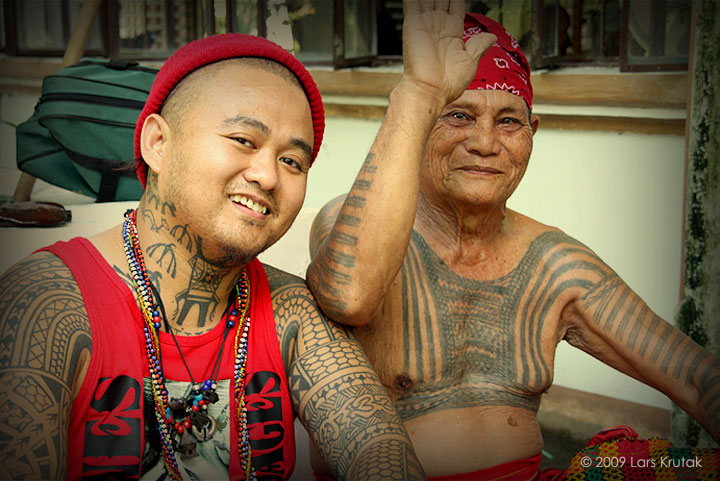 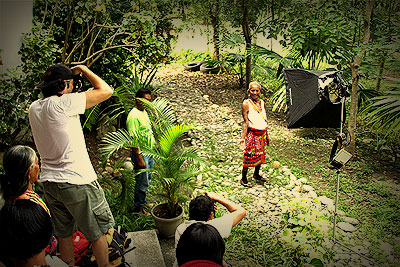 Author and Ivan Sarenas imaging Kalinga elders for the Voices of the Ancestors project.

Kalinga batok functions to communicate the shared values within the group and tells others what the ethos of the Kalinga is and what sensibilities were shaped by that cultural world. As a system of knowledge transmission, batok works to assert and inscribe tribal affiliation, maturity, status, as well as Kalinga cultural pride and artistic ability. For 89-year-old Whang-Od, the last Kalinga tattoo artist, she has transformed countless generations of Kalinga “boys” and “girls” into “men” and “women” through severely painful rites of passage with her orange thorn needle and wooden mallet. She has also created tattoos that are believed to induce fertility, and others that enabled warriors to defeat their enemies or protect individuals from unseen enemies or illnesses borne from marauding evil spirits. 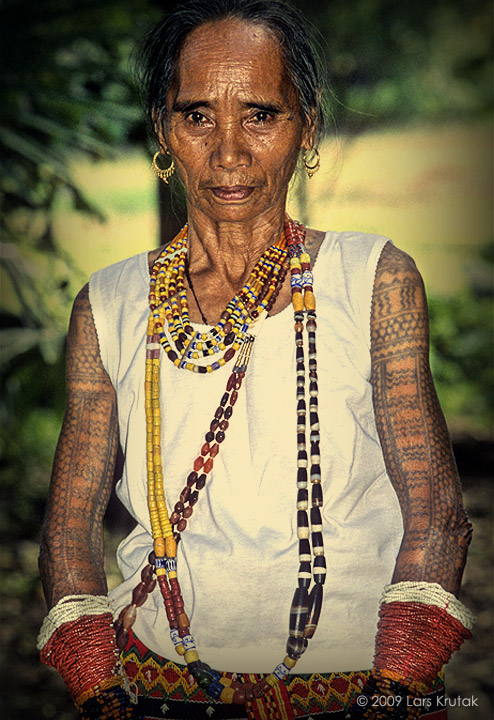 The beautiful bead ensembles circling the wrists of this Kalinga woman are called tinali.

The anticipated publication date of Voices of the Ancestors is spring 2010. But because the cost of printing books of this size and quality is high, we continue to seek additional funding to pay for the printing. If you want to make a contribution to the publication fund, please contact The Kalingas-North America Network (KaNA) who are our U.S.-based nonprofit sponsor in Los Angeles, California. All gifts through KaNA for the publication are tax deductible. You may contact the organization’s Chief Executive Officer Mr. Marshalfield A. Wandag at (323) 286-9281 or via e-mail: kananetwork@sbcglobal.net.

If you have any additional questions, you can also write me at:  bodymarks@larskrutak.com 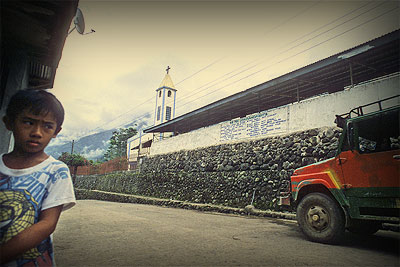 Missionization, roads, and communication with the outside world have all played a part in the demise of Kalinga tattooing customs.