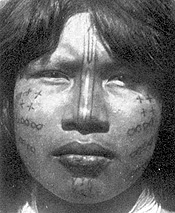 LYING SOME 1,000 MILES to the south of the Amazon River, the Gran Chaco, which possibly derives its name from an indigenous Quechua word meaning “hunting ground,” is a vast arid plain located at the center of the South American continent. This very hot and semi-desertic lowland region covers portions of Argentina, Bolivia, and Paraguay, and is drained by several rivers. On the whole, the entire region is barely suitable for human settlement, yet several groups of indigenous people continue to live here despite the harsh climate and landscape.

Although tattooing in the Chaco has been replaced by less painful and infective forms of body-painting in the modern-era, it had “magical” implications in the past and nearly all indigenous groups practiced it. Women generally displayed more abundant tattooing than men, and it was truly exceptional to find males as profusely tattooed as women.

Girls were first marked on their foreheads when five to seven years old, and with the passing of the years they received additional tattoos consisting of small circles, crosses, half-moons, and lines on their faces. By the time a girl reached maturity, her facial tattoos were finally completed at which time she was eligible for marriage. 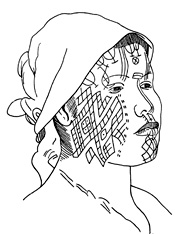 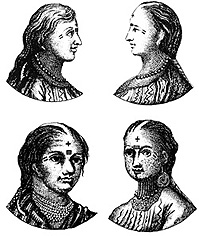 Tattoo artists were almost always old women. They first traced the outline of the design on the client’s face (or other body part) with charcoal. Then the tattooist punctured the facial skin with a small bundle of cactus thorns or a single bone awl dipped in a mixture of saliva and soot. Soon thereafter, the skin began to swell as a steady stream of blood ran down the client’s face.

In 1750, the Jesuit missionary Martin Dobrizhoffer provided a rare account of the actual ritual among the now-extinct Abipón. His observations are said to have been typical of all Chaco groups that practiced tattooing in the past:

“Over the course of the days spent in  tattooing, the girl is confined to her father’s dwelling and wrapped in a hide – She must abstain from eating meat,  fish, and other sorts of food, and is only allowed to feed upon a small amount of fruit which grows on brambles and conduces much towards cooling the blood.

Tattooing among the Abipón  took place over four to five days with a sharp cactus spine. The client returned everyday until the face, arms, and breasts were full of tattoos. The Abipón paid for this with an amount of blood, sweat, tears and moaning. When the girl became of age, she laid her head upon the tattoo artist’s lap, generally a woman of many years, to become adorned and beautiful.

If the poor little girl complained, or escaped from the tattooist;s lap, she would be pinned down and told by the irritated old lady, ‘Enough of this cowardice, you are a disgrace to our Nation, just because I am tickling you with a few spines. Don’t you know that you are the descendant of those who had their pleasures and glory in being wounded? You should be ashamed of yourself for being a timid little creature!”

THE RITUAL SIGNIFICANCE OF CHACOAN TATTOOING 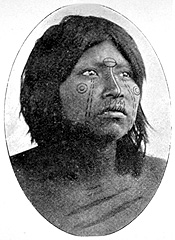 From Dobrizhoffer’s report, it does not appear that Abipón tattooing served merely as a form of “ornament” used to beautify the body. Rather, all Chaco women were tattooed in much the same way and with many of the same motifs, the only variation being in their positioning. In this way no particular woman could have hoped to gain aesthetic advantage over her “competitors” through tattooing. Furthermore, women fasted, were secluded and carefully covered during the tattoo ritual which seems to indicate that tattooing had a religious significance. These facts, combined with the belief that tattoo pigment and the tattooist’s saliva were in themselves purificatory substances utilized to repel evil spirits, suggests that Chaco tattooing practice was not simply a form of facial adornment. It was something altogether different.

Carbon-based substances used as tattoo pigment were considered in nature to be prophylactic. The inherent power of the pigment lay specifically in its connection to fire, and among many indigenous peoples of the Chaco, Brazil, and Patagonia, ash or charcoal procured from fire was utilized ritually as a radical means of purification. For example, the Abipónes threw ashes in the path of whirlwinds (thought to be passing spirits) to repel them; the ancient Tupis, at the ceremonial killing of enemy prisoners taken in war, painted their bodies with ashes to protect themselves from the vengeful spirits of the soon to be deceased; and Fuegian shamans heaped ashes upon themselves to enter the realm of the spirits. 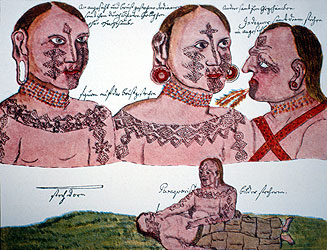 Saliva procured from the venerated tattoo artist had magical attributes ascribed to it as well. It was a kind of sanctifying substance that enhanced the efficacy of the tattoo’s overall magical power.

In the Gran Chaco, spirits helped or harmed individuals depending on how humans behaved with respect to them. In most cases, spiritual confrontations were believed to be the result of human transgressions that in essence “activated” them. When a village was threatened by an epidemic, bad weather, or some other critical disturbance, Chaco peoples performed ceremonies aimed at curbing the influence of the supernatural entity or entities believed responsible. The accompanying ceremonials that followed were characterized by collective acts of dancing, drumming, chanting, and body painting which in their inherent power coerced, influenced, and/or repelled the supernatural intruders from the community.

The delicate condition of life into which an individual of the Chaco was thrust obviously served as a constant source of concern – spirits (good or bad) could be encountered anywhere and in anything. For a woman, however, the most immediate source of personal danger lay in her menstrual blood and when it flowed, she and her community became seriously exposed to malevolent spirits.

It seems to be a common idea that among all Chaco peoples menstruation was influenced by the new moon. The flowing blood of the girl “awakened” her sexual desire and was particularly enticing to evil spirits who were “angry with her.” Although the attainment of puberty made the woman eligible for marriage, it also marked the beginning of her journey towards a series of critical life stages (e.g., childbirth, additional menses) that would not only come to shape her physical and emotional development, but would again expose her to supernatural dangers. Therefore, the tattooing initiation ceremonies at puberty had for their object, in part, to protect women against spiritual manifestations for the time being, and more importantly “to purify her once and for all from the evils associated with her sexual functions during the years to come.” 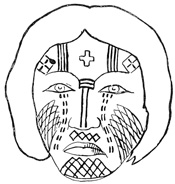 As in many indigenous tattooing cultures around the world, there was a unifying thread of belief that the body’s orifices worked as passageways by which evil spirits traveled to enter the human body to harm it. Natural openings such as the mouth, the nostrils, the eyes, and ears were especially sensitive to the actions of spiritual entities, and individuals who left their heads, bodies, or faces uncovered (and hence unprotected) were especially at risk.

Among the Toba, Choroti, and Mataco of the Gran Chaco, a girl arriving at puberty was kept secluded in her house for a period of four to five days and her face and entire body was carefully covered (or painted) because “evil demons” were constantly “attacking her.” She was also obliged to fast strictly, ingesting only vegetable products. Sometimes she was permitted to uncover herself and exit the dwelling, but only if she moved to the center of a dance circle where a group of men (Toba) or women (Choroti) wielding deer hoof rattles attempted to shield her from the incorrigible spirits by whom she was exposed to for the moment. 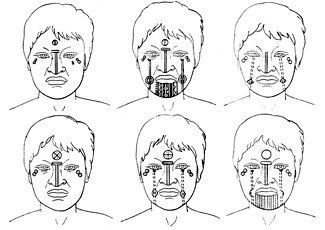 As noted, initiates were frequently objected to periods of ceremonial fasting or restrictions in diet prior to or after the tattooing operation. According to Dobrizhoffer, the 18th century Jesuit missionary, Abipón tattoo initiates were restricted to a diet of a little fruit which grows upon brambles because it “cooled” the woman’s blood. In most cases, particular foodstuffs, especially those that were associated with blood in their raw state (like meat and fish), were prohibited from being ingested due to the fear of evil spirits entering into the body with the food itself causing madness. Of course, such food restrictions in the Gran Chaco also stemmed from the idea that particular prey animals (armadillo, peccary, rhea, etc.) were associated with “Spirit Masters” who, if not properly propitiated, would either bring illness to the community or cause the game animals to disappear. The meat of predatory animals was particularly forsaken especially if that species performed a key symbolic role in mythology (e.g., jaguar, puma, hunting dogs, particular birds, etc.) or if the predatory or prey animal was one believed to “share immortality with men [and women].” Therefore, the result of these extended sets of food restrictions encountered in Chacoan puberty and tattooing rites was not only to enhance the power of resistance by frustrating the evil spirit’s possessive power, but also to declare that particular animals were equivalent to humans (via reincarnation) and should not be eaten during the tabooed period.

[A]nimals (predators) and spirits see humans as animals (as game or prey) to the same extent that game animals see humans as spirits or as predator animals – Animals see their food as human food (jaguars see blood as manioc beer, vultures see the maggots in rotting meat as grilled fish); they see their bodily attributes (fur, feathers, claws, beaks) as body decorations or cultural instruments; they see their social system as organized in the same way as human institutions are (with chiefs, shamans, ceremonies, exogamous moieties, and whatnot); [and they believe] that any animal can be human (Viveiros de Castro 2004).

What this means, ultimately, is that there is more “being” to an animal than meets the eye.