INSET: Neck and torso tattoos of the supreme war commander of the Yuchi, 1736. He also wears a tattooed serpent near his ear.

WHEN AMERICAN WRITER Lewis Henry Morgan published his classic account of Iroquois Indian culture entitled “League of the Ho-dé-no-sau-nee or Iroquois” in 1851, tattooing had ceased amongst the people he so vividly described. Christian missionization, the end of tribal warfare, forced removal to reservations, the adoption of European dress and less permanent forms of ornament all contributed to the decline of this once important custom among the Iroquois (Mohawk, Seneca, Oneida, Cayuga, Onondaga, and Tuscarora) as well their Algonquian neighbors – and sometimes enemies – the Delaware, Illinois, and other Native American groups inhabiting the Great Lakes region. 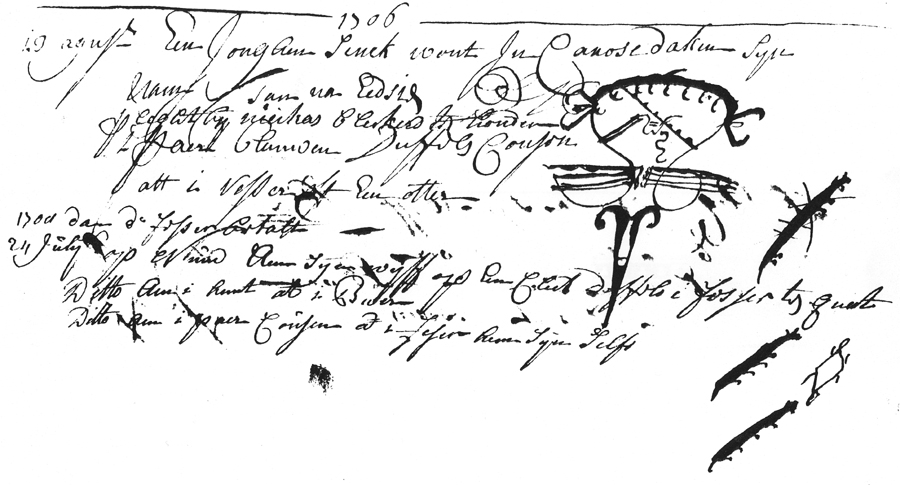 Nearly all Iroquois men’s tattoos were distinct to them. According to the account book of Dutch trader Evert Wendell dated August 13, 1706, a young Seneca brave named Tan Na Eedsies visited Wendell in Albany, New York, and completed his transaction by drawing a pictograph next to his order. This drawing identified Tan Na Eedsies, and the tattooed patterns on his face, neck, and chest were considered equivalent to his personal signature. Tan Na Eedsies’ facial marks are consistent with the ethnographic record and include a serpent manitou, a series of bird manitous skirting his hairline, scalp-tally markings running along a bar that crossed his nose and other neck and V-shaped sternum markings.

Although the cultural tradition of tattooing was once quite widespread across the Northeast Woodlands, surprisingly little historical, material, and visual evidence survives today detailing the forms, functions, and significance of the indelible art. In fact, the only substantive body of evidence that exists regarding these long-vanished customs is that which is contained in a handful of early 18th century accounts, a few portraits of tattooed war leaders, and carved weapons from the era that sometimes reveal the facial and body tattoos of the warriors who owned them. 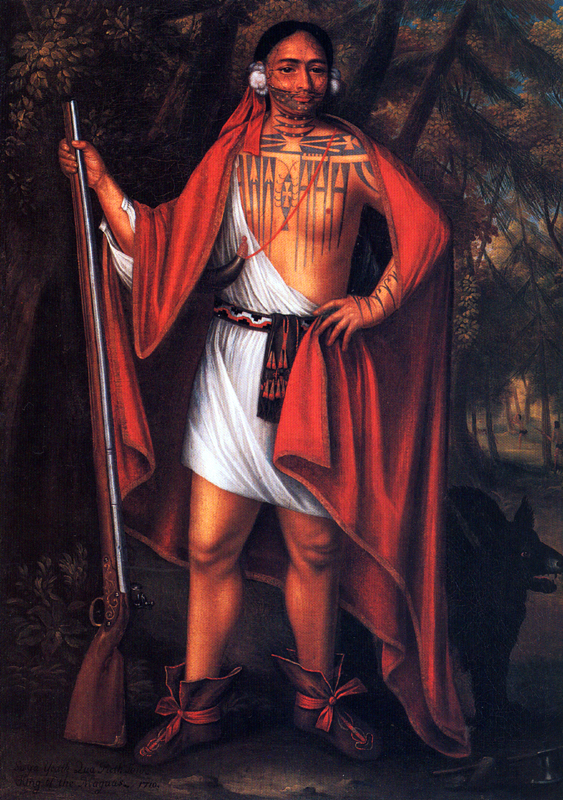 Because the record of tattooing in this region has yet to be properly documented, I will attempt to shed light on these nearly forgotten traditions by providing a preliminary view with this article. My goal is to reveal the hidden meanings behind these lasting symbols through the neglected study of Iroquois war clubs and the tattoo pictographs that they contain.

The 18th century Iroquois – Mohawks, Oneida, Onondaga, Cayuga, Seneca, and Tuscarora – called themselves the “United People”, always to remind each other that their safety and power resided in a strict mutual adherence to their tribal confederacy. Other groups like the Mahican, who were neighbors to the Mohawk, became allies around 1640 although this relationship was oftentimes strained.

Each member tribe of the Iroquois Nation was closely linked through marriage and they also drew warriors from one another when the call to arms was given. Collectively speaking, war was not waged in competition for natural resources or to accrue new territories. Rather it was part of an ongoing cycle of blood feuds extending back many generations that were settled or avenged with still more violent killings.

Once an Iroquois warrior attained manhood his status was enhanced with a new name drawn from a pool of clan monikers held by a chief. About the same time, the young man was encouraged to fast and wander the wilderness until he found his manitou, or personal guardian spirit, that would protect him in battle for the rest of his life. Sometimes a man’s manitou was the Sun or another celestial object. But if the manitou (or manito as it was called in Alogonquian) was an animal, then its skin, or its plumage if it was a bird, was carried by the Indian on his journeys and on the war-path because it was believed to contain the spirit of the animal itself.

A warrior’s manitou was also tattooed upon his skin, usually on his face. When the young warrior dreamed, it was believed that this sign was a “divine message” or omen given to him by his spiritual assistant who was in contact with its Master: the God of War (Areskoui) and the Creator (“the Master of Life”) who were both identified with the Sun. These messages were to be followed under any circumstance no matter how absurd they may have seemed.

Sometimes a warrior’s manitou or manitous (he could have several) were carved upon his war club. The German travel writer Johann Kohl encountered an Ojibway warrior in Wisconsin in the 1850s with a richly adorned “gunstock” variety of club. This man vividly recounted the deeply personal meanings that his weapon carried including his “dream of life” or vision that provided him with his first manitou, an eagle, which he fasted ten days in the wilderness to obtain.

Of course, warriors also carved their military exploits into the body of these clubs, including the number of enemy engagements and the number of prisoners taken and killed. They also inscribed their personal tattoo patterns into these deadly weapons. This military shorthand not only spoke about the courage and skill of the warrior, but it must have also had a psychological effect upon a man’s enemies; since it was customary for men to leave their decorated war clubs as “calling cards” on the field of battle – either depositing them near a corpse or still embedded in the victim’s body.

One rare 17th century Iroquois war club left on a Massachusetts battlefield carries all of this aforementioned symbolism. This club, believed to date to King Philip’s War (1675-76), displays an exceedingly rich body of facial tattoos that belonged to the club’s owner; he may have been Seneca or Mohawk based on the style of tattooing. A close-up view of the club clearly shows a series of approximately fifteen carefully carved circles running along a midline that crosses the ridge of the warrior’s nose. After uncovering a rare and forgotten missionary document published in 1791, I have determined that these circles are in fact tallies counting the number of scalps the owner had taken in war. Other markings, like arrow points near the hairline, are probably a record of the number of times the warrior had been wounded, since similar information has been stated in other documents dating to the Revolutionary War.

Another intriguing tattoo motif, which resembles a sunburst streaking off the face, adjoins the warrior’s mouth on the lower jaw. The location for this tattoo seems to be a preferred one across the Northeast and Southeastern Woodlands because 18th century portrait art from the Yuchi, Cherokee, Yamacraw-Creek, Delaware, and Mohawk areas shows similar placement of facial tattoos.

Earlier in this article I noted that solar, avian, and other animal designs were commonly adopted as manitou spirits and were usually tattooed on the body. Placing such powerful beings on the face or near the mouth was not a haphazard choice, because the mouth was considered to be a passageway into the soul. This meaning can be illuminated through several examples, including an Iroquois war club at the National Museum of the American Indian in Washington, D.C. that clearly indicates a serpent (manitou) moving along the handle of the club towards its own mouth. As the anthropologist Edmund Carpenter has observed, “In Woodland[s] cosmology, death swallows its victims.” 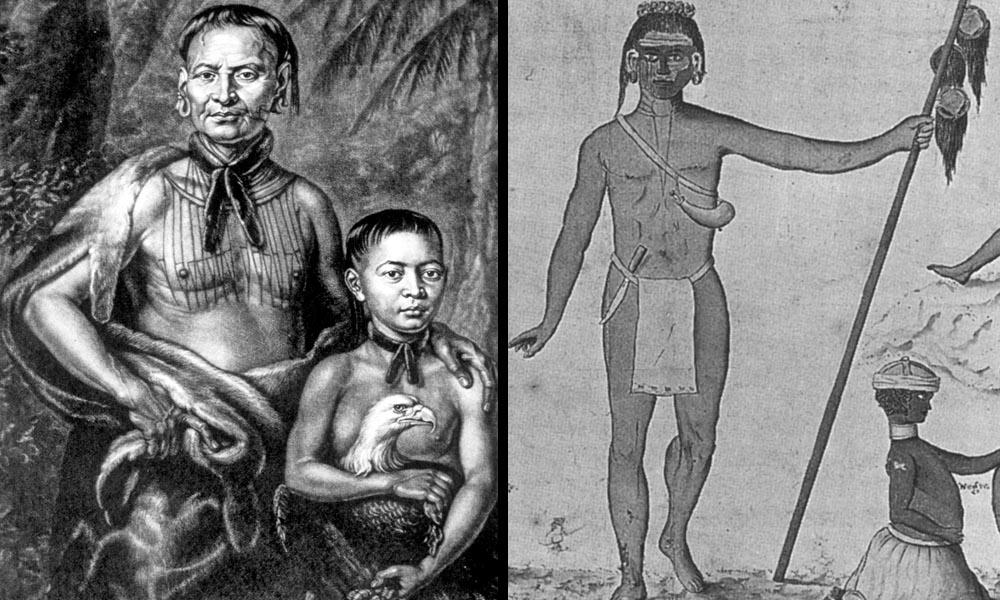 Facial and body tattoos of the renowned Yamacraw-Creek leader Tomochichi of Georgia, 1734, and sternum tattoos of a Choctaw warrior, 1730. 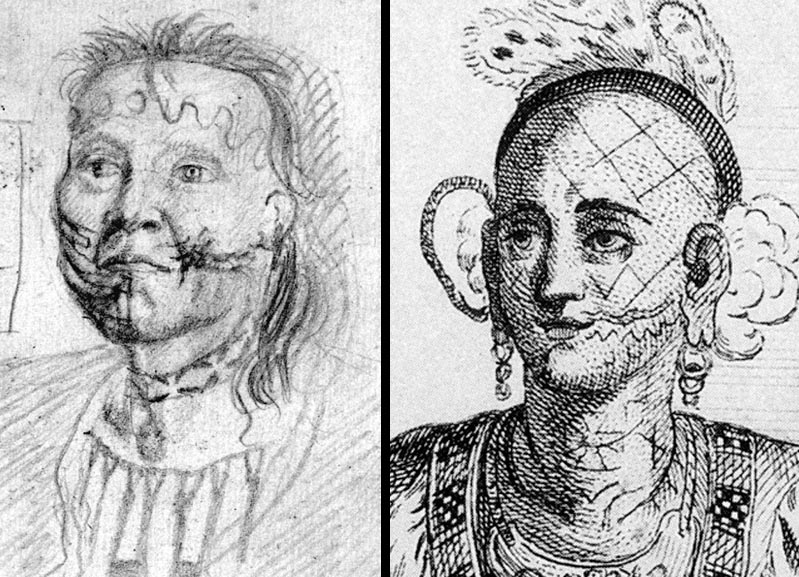 Facial and body tattoos of the Yuchi leader Senkaitschi of Georgia, 1736, and facial tattooing of a Cherokee war leader, 1762. 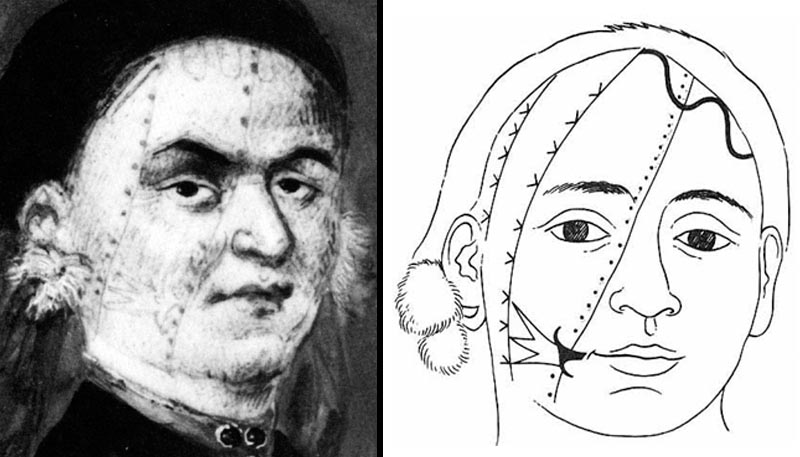 Facial tattooing of the Mohawk warrior Onigoheriago with composite “sunbird” manitou near the mouth, scalp and war wound tallies crossing his face, 1710.

Other early 18th century portraits of Iroquois warriors bring still more symbols into tattooed relief. One important image is that of the Mohawk warrior Onigoheriago, who was painted and sketched on a visit to England in 1710. He proudly displays approximately twenty scalp-tally marks, a manitou design beside his mouth, and fourteen cross-hatches or V-shaped markings that probably denote the number of times he had been wounded in battle. The more heavily tattooed war chief Brant who accompanied him to London owned many more scalp-tally tattoos and one dozen wound marks.

Interestingly, Onigoheriago’s  manitou tattoo seems to be a composite motif comprised of an avian design joining a sunburst like that seen on the facial portrait carved into the King Philip war club. It should be noted here that a large inverted bird was also engraved on the aforementioned club, and it was positioned on the sternum of the warrior perhaps indicating yet another manitou of the owner.

As the pictoral record indicates, V-shaped sternum tattoos and plume-like chest tattoos are a common symbol ranging from the Seneca (1706) and Mohawk (1710), to the Choctaw (1730), Yamacraw-Creek (1734), Yuchi (1736), and Cherokee (1762) territory of the American Southeast. The custom of sternum marking seems to have persisted longer than facial tattooing and one of the latest examples, a miniature oil painting of the 75-year-old Oneida chief Good Peter, dates to 1795.

However, it is not known if these V-shaped sternum or plume-like markings carried avian symbolism, like they do in other warrior cultures of the indigenous world (e.g., Kalinga of Philippines). What is known is that the “plumed” torso markings were only worn by warriors of the highest rank and that this tradition died out completely by 1750 (e.g., the last generation of men so marked were tattooed in the late 1600s).

From the standpoint of warfare, however, we can be quite certain why a warrior might have been influenced by his dreams to adopt a bird as a personal manitou or to have permanently incorporated avian tattoos into his body. Birds were all-seeing, some were predatorial, and warriors employed various birdcalls to signal and maintain contact on war expeditions or to cover inadvertent noise while moving through the landscape.

Some tribes like the Illinois also made the cries of certain predatorial birds when they scalped their enemies. Moreover, many birds like eagles, hawks, and crows flew close the heavens and were believed to be messengers of the Supreme Being who was symbolized by the Sun. Thus, it seems like it was an ancestral prerogative to become bird-like in combat because this was nothing less than a pure and mythically potent male pursuit.