THE TRADITIONAL HAND TATTOO CULTURE of the indigenous Paiwan people of southern Taiwan has nearly vanished. Today, less than forty elderly women (vuvus, ‘grandmothers’) aged 80 years and above wear these ancient symbols tied to their social status, spiritual protection, and the afterlife. 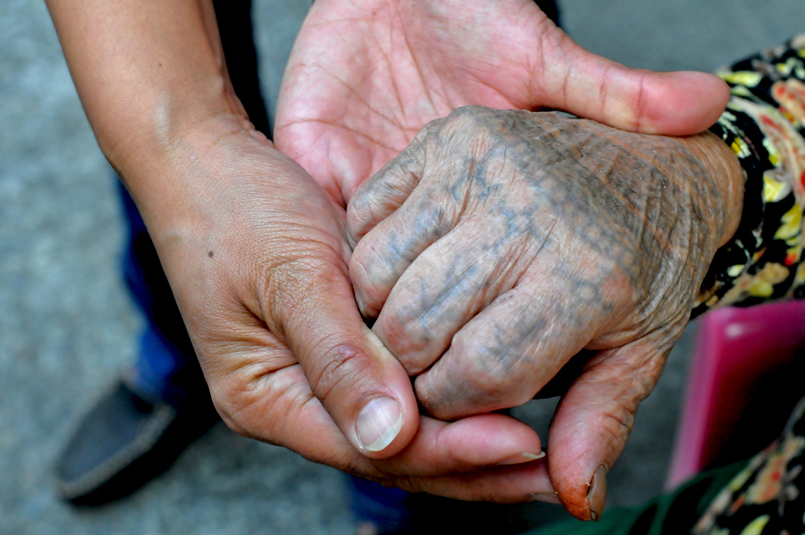 The decline in traditional Paiwan tattooing customs began long ago during the Japanese occupation of Taiwan (1895-1945). They forbid the practice, although I heard stories of young women meeting tribal tattooists in the high mountains to be tattooed in secret. Even the Chinese Nationalist government who took control over Taiwan after 1945 prohibited Paiwan tattooing. “However, it was just at the time that the Japanese were handing over to the Nationalists that my elders were encouraging us to be tattooed for a two-year period,” says tattooed elder Ho Yu-mei of Laiyi Township. “Then, the tattooing stopped.”

Traditionally, Paiwan men were also tattooed. But the last generation of male tattoo bearers passed away in the early 1990s. Powerful chiefs wore specific motifs on their chest that were related to their social status. Chiefs also owned intricate body tattooing that was shared with men who had proven themselves as warriors and headhunters. 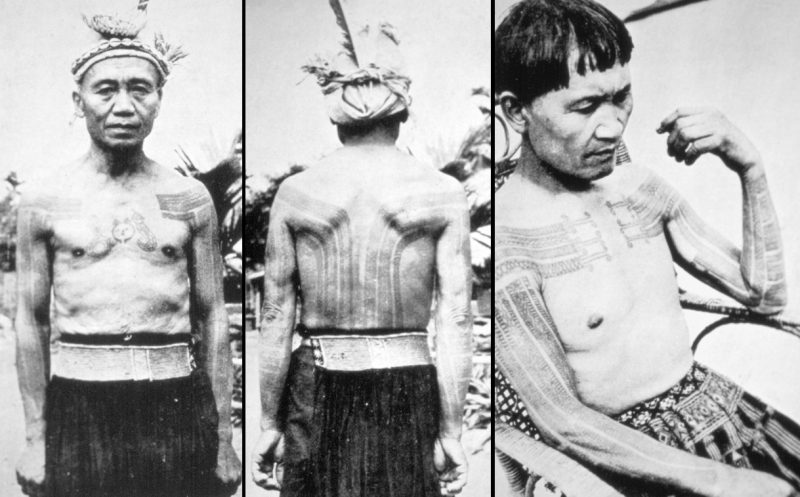 Paiwan tattoo artists could be male or female. Each village had one or more artists, but most were aristocrats and also shamans. Before a girl was tattooed, her parents had to present the ruling chief of the village with ceremonial beverages of millet wine: for it was the chief who decided the appropriate day of the tattooing. The parents of the girl then asked him which class of tattoo patterns – there were five classes comprised of various combinations of designs – she could receive. “We could not decide it ourselves,” says 86-year-old tattooed elder Vuruvur Saivig. “The patterns on my fingers are associated with my social class. And at that time, the tribal rule was that only one child – the eldest one – in one family could have tattoos.” 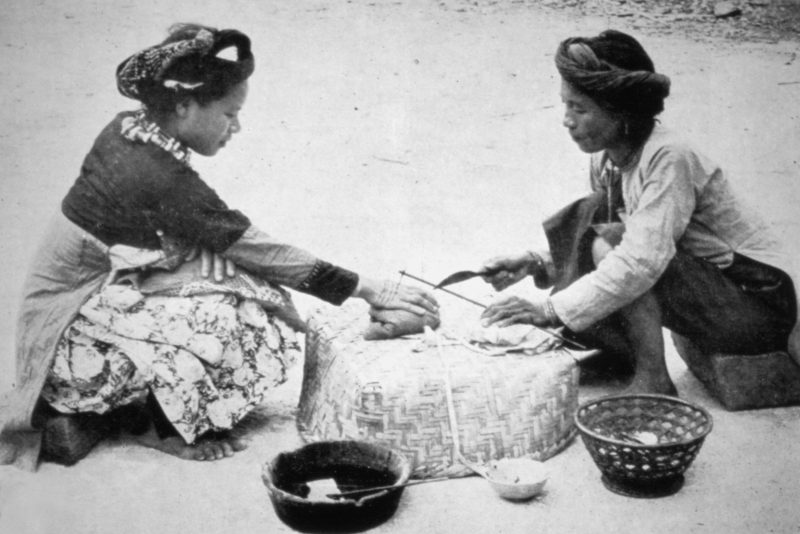 Offerings were then made to the Ancestral Spirit of the village, a kind of guardian or protector spirit, and various taboos were observed. For example, tattooing could not take place if there was a pregnant family member living in the same house of the tattoo client. If there was a recent death in the village, the tattooing was postponed. Girls who were having their period could not be tattooed. Also, a person could not be tattooed on the first day of a new lunar month or during the Malojeveq festival. This major Paiwan event took place every five years to petition the Ancestral Spirit for protection, rain, fertility to crops, and fertility to women. This spirit also protected the tattooist from evil spirits that were attracted to the flowing blood released during the tattoo operation.

Tattooing (kivutsik, ‘to print or carve’) was usually performed in winter because the drier air was believed to aid in healing. A small hut was constructed in a semi-isolated area for the tattooing to take place. To prevent intruders from watching, especially pregnant women, a bamboo stick was erected in front of the hut. If a pregnant woman saw the tattooing, it was believed that the tattoo client’s hands would swell and become septic or their tattoos would fade and eventually disappear. If someone sneezed or farted during the tattooing, the operation was postponed immediately; otherwise, the soul of the person being tattooed “would be taken away.” 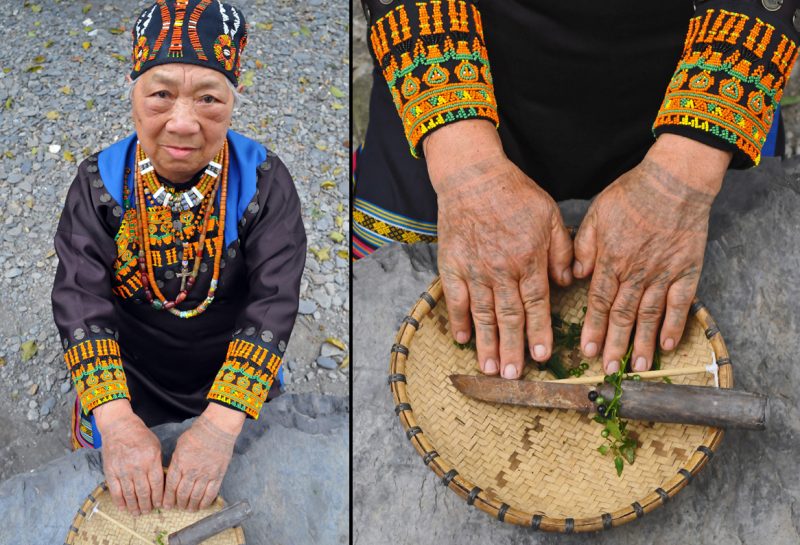 Vuvu Ukani, born 1932, of Punti Pulti village holds a basket with the tools of the Paiwan tattooist, which was the position of her mother who tattooed her hands at the age of 15. In the basket is the knife used as the mallet to hand-tap the needles, stalks of millet used to make tattoo pigment, and a local medicinal plant used to heal the wounds.

The tattoo artist applied the tattoos through the technique of hand-tapping. Tattoo pigment was comprised of charred millet stalks mixed with soot taken from the underside of a cooking pot. For stenciling the tattoo design, however, crushed slate was mixed with water and applied to the skin with grass stems or the back of a knife blade. Tattoo needles were made by binding a pair of steel needles with linen thread on a bamboo stick about 40cm in length. Before the introduction of steel needles, the Paiwan used thorns of the mountain orange or pomelo as a tattoo needle. A small knife with a wooden handle was used to tap the needles with soot pigment into the skin. As the tattooing progressed, the knife blade was used to scrape away the flowing blood so the artist could see their work. The tattooist sometimes spat betel nut juice on the wounds to stop excessive bleeding. 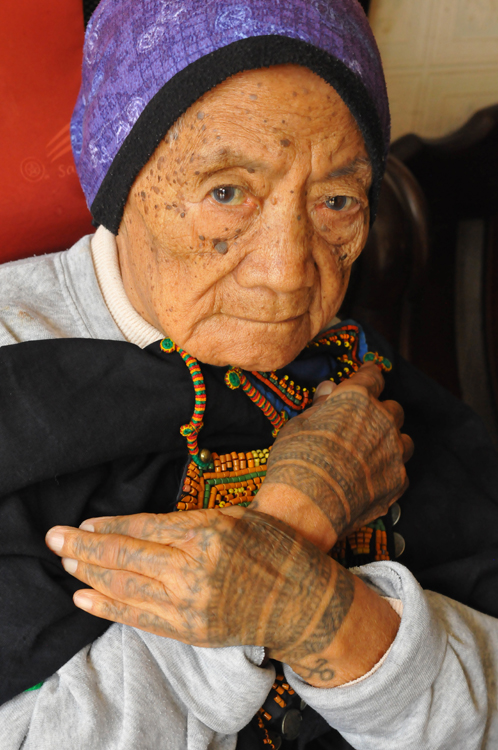 Ljalep Qamuljilj, born 1927, was a Paiwan elder and aristocrat. She was tattooed by a female artist. “When the tattoo operation was completed, there must be a ceremony to cool the temperature of the hands. We also prayed to the Ancestral Spirit so that the wounds would not become infected and that the patterns would be clear and bright,” she said. Sadly, Ljalep died shortly after this photograph was taken.

Vuruvur Saivig recalls the day she was tattooed. “I was 16 years old and during the tattoo operation my hands were placed on a folded cloth atop a large bamboo basket. My hands were bleeding and I felt great pain. Once it was completed, banana leaves were placed on my hands to cool them down. For healing, we used plants such as sweet potato leaves or sini (leaves of chili pepper). The leaves were crushed and squeezed into a juice, and then put on the hands.” Another function of the juice was to make the tattoo patterns clear and bright. 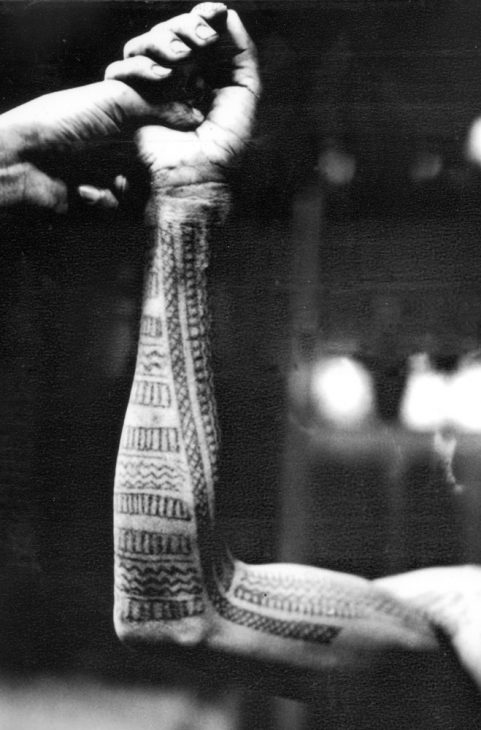 Payments varied according to the complexity of the design given, but members of the chief’s family did not have to pay for their tattoos. For example, the cost of tattooing a man’s chest, back, and both arms was high: one pig, two iron rakes, four knifes, one axe, one roll of cloth, one porcelain bowl, and a bottle of millet wine. But tattoo artists accepted other forms of payment. “The tattoo masters understood our economic status,” says 85-year-old tattooed elder Ratja Balu. “I am from a noble family, but I lost my parents when I was young. After that time, I lived in poverty and I didn’t have money to pay for the tattoos. So I went to the tattoo master’s field and did some farming work for him. The number of days that the master needed for the hand tattoo operation was the number of days I worked on his farm,” she recalls.

Traditionally, Paiwan tattoos were exceedingly important for one’s journey through life and into death. Tattooed vuvus told me their hand patterns protected them from evil spirits, and once they passed into the afterlife the Ancestral Spirit would recognize their social standing by the tattoos they wore. 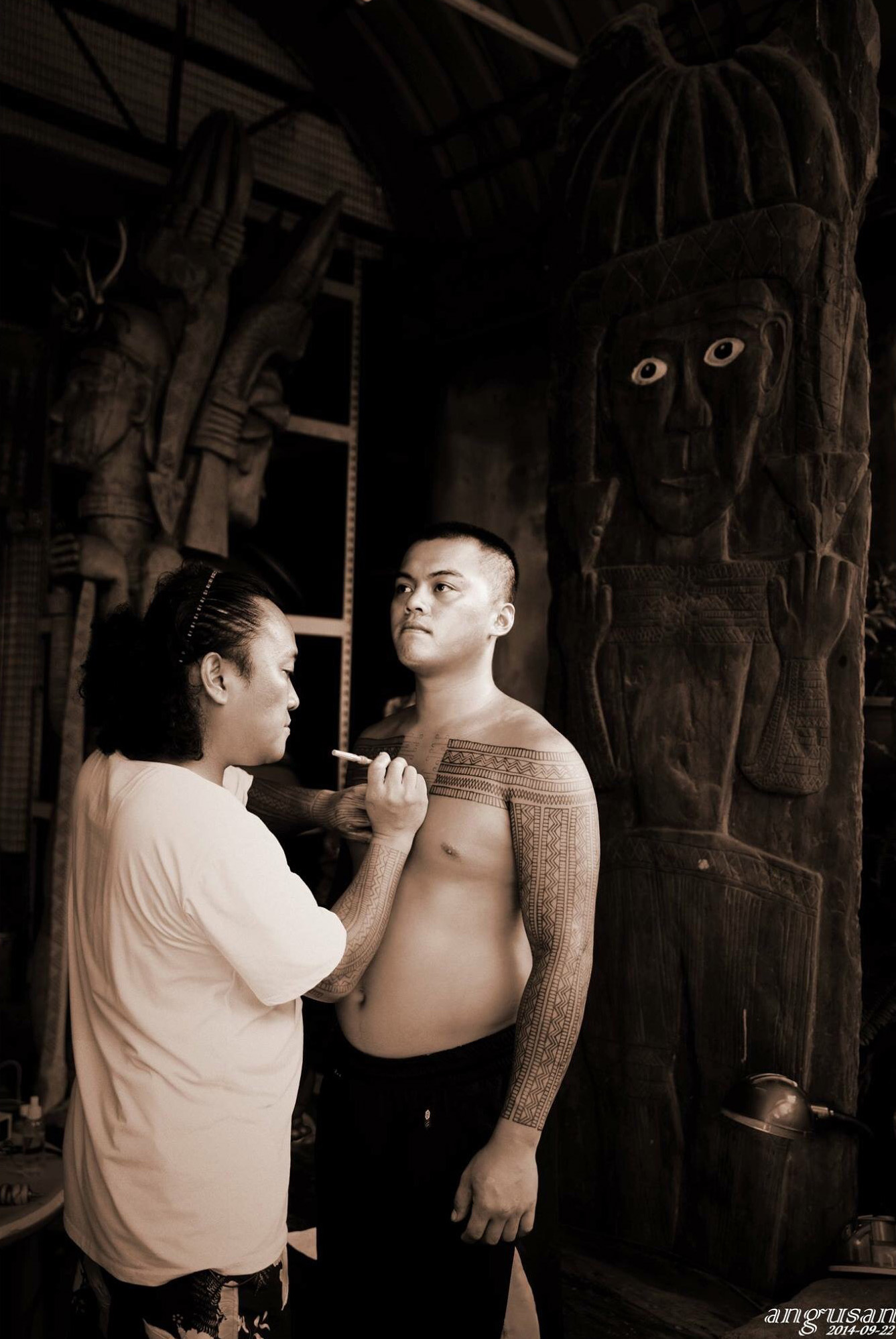 Five years ago, Paiwan artist Cudjuy Patjidres began reviving tattooing for men and women. Thus far, he’s created three bodysuits for men from noble families and about a dozen hand tattoos for aristocratic women. The designs he uses are traditional; for women’s hand tattoos he uses various combinations of ‘sun,’ ‘door,’ ‘millet pounder,’ ‘spider,’ ‘human figure’ and ‘hundred-pace viper’ designs, among others. For men, the primary patterns are associated with the movements and body parts of the hundred-pace viper (Deinagkistrodon acutus), which is considered to be the spirit of life, the greatest of all spirits because it represents the guardian spirit of the Paiwan people.

Cudjuy has been drawing all his life and he began tattooing himself and his friends in high school. His body is wrapped in traditional Paiwan tattoos that were given to him by a friend, who is a sculptor and part-time tattoo artist in Taipei. 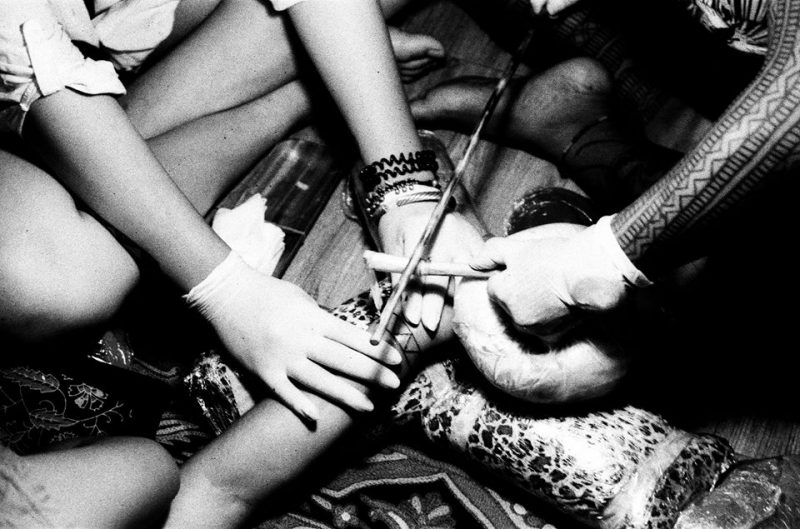 Originally from Taitung County in southeastern Taiwan, Cudjuy respects the ancient rituals of Paiwan tattoo. And before he begins a new tattoo, he offers a ceremonial drink to the Ancestral Spirit of his village. “I face the direction of our sacred mountain and offer the Spirit this drink of alcohol,” he says.

Cudjuy tattoos by machine but is skilled in making traditional Paiwan hand-tapping tools. He uses these implements to demonstrate traditional tattoo techniques at cultural events and museums, and for the past year he has been hand-tapping interested clients. 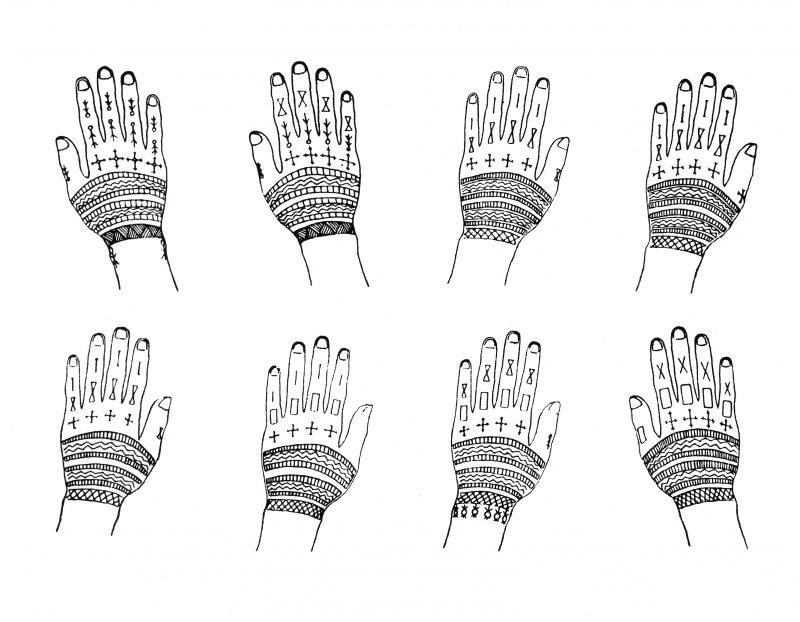 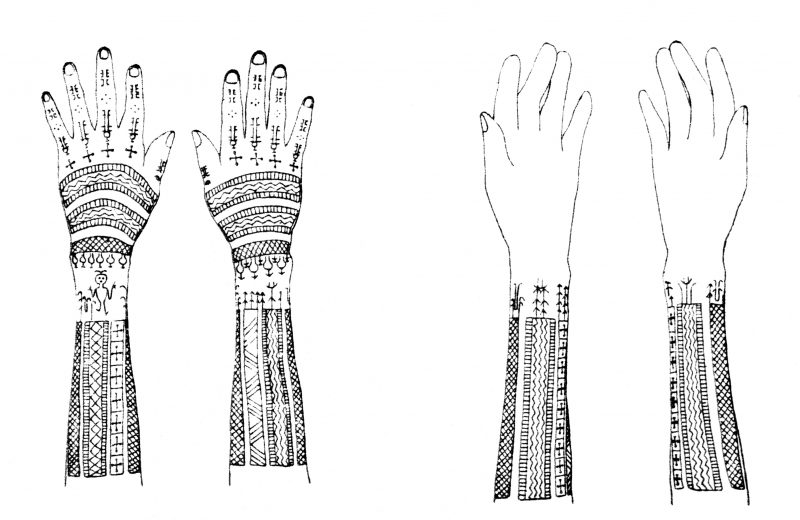 Paiwan women’s forearm tattooing was most common among the tribes of the Taitung region of southeastern Taiwan.

I asked Cudjuy if he knew of other Paiwan tattoo artists. “There are other artists from my tribe working in Western-style shops in the cities. Sometimes they do create tattoos based on Paiwan designs, but they make mistakes regarding the traditional patterns because they haven’t done the research and they also don’t know the rituals.”

I also asked why the Paiwan tattoo revival was important to him. “I don’t want to see this ancient tradition disappear in the future. I want to preserve this aspect of Paiwan culture and not let it slip through our fingers. I feel a responsibility to bring it back since my grandfather Jiaxuban was tattooed and he encouraged people to have tattoos. I also have the support of the elders and that is very important for me.” 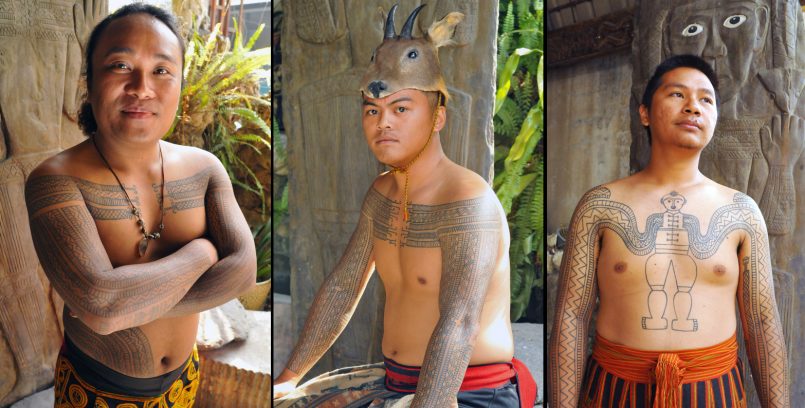 (Left) Paiwan tattoo artist Cudjuy Patjidres. (Center) Cangal, a future chief of the Gulou Tribe. ‘I am aware that I am a member of a high class family, an important family. I want to show that I am responsible, so I experienced the pain to get this traditional mark.’ Tattoos by Cudjuy. (Right)
Kuljelje Kalivuan, a Paiwan nobleman. ‘The central figure is from an old story that belongs to my family. There was a powerful man. He took two huge pieces of slate from the mountain top and jumped down into the valley below. Here, he created the chiefly lineage of my family. He is our ancestral hero and that is why he is tattooed on my body.’ Tattoos by Cudjuy.
.

Recently, Cudjuy completed a full body tattoo on Cangal, a future chief of the Gulou Paiwan tribe, whose family is considered royalty. Before the operation, he had to discuss with the head of the tribe what tattoo patterns he could make. After a final drawing of the bodysuit was created, Cudjuy returned to the tribal head to receive his approval before he could begin tattooing. Because Cangal’s social status is so high, a special offering to the Ancestral Spirit was made. A pig was dedicated to the spirit and sacrificed. Then, its meat was distributed to the people in Cangal’s village.

Apart from Cudjuy, another Paiwan man named Chen Wen-Shan (Angusan) is responsible for the current revival of tattooing in his hometown of Laiyi Township. Wen-Shan, a staff member of the Laiyi Indigenous Museum, spent three years documenting the stories of local tattooed Paiwan women, resulting in a landmark 2015 exhibition at the National Museum of Taiwan entitled “Engraving Prestige: Hand Tattoo of Paiwan, Laiyi.” His efforts also encouraged younger women to become interested in receiving their own Paiwan hand tattoos. 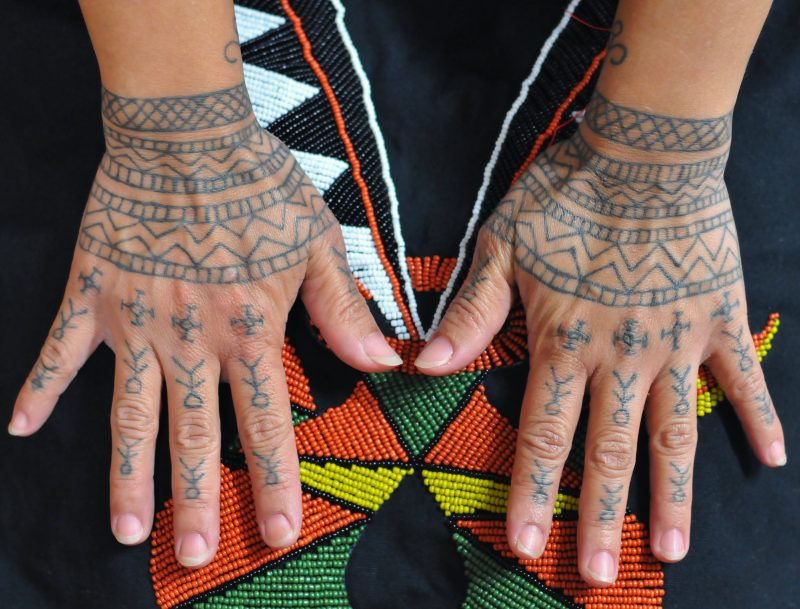 Hand tattoos of Cutju Malikilikil, Nanhe village. ‘I received a message in a dream from my deceased aunt to get these tattoos and that gave me the courage I needed.’ Tattoos by Cudjuy.

Today, Wen-Shan’s wife Cutju Malikilikil and several of his female relatives living in Laiyi have been tattooed by Cudjuy. One of these women, Kmsing, told me it was “honorable” to get her tattoos. “I did this to honor my ancestors, my family and our cultural heritage.”


ABOVE: Video of Cudjuy and Lars’ tattoo research in Taiwan from Aboriginal TV Network (TITV)!