PLÁKA, THE TRENDY DISTRICT in the shadow of the Acropolis, is packed with restaurants and souvenir shops, and is definitely one of the most interesting areas in Athens. If you’re into archaeology and historical monuments of the past – not to mention good food and wine – making Pláka your tourist homebase is a wise decision. On the other hand, if you want to get inked by some of the best in Greece, you could check out the brother and sister tattoo tag team of Paul and Anna Mamatsis at Jimmy’s Custom Tattoo.

Jimmy’s (at 13 Kyristou Street) is the oldest tattoo shop in Greece and was opened by Paul and Anna’s father Jimmy in 1977. Jimmy is a legend in Greece, and back in the ’50s and ’60s he traveled the world as a seaman, picking up the tattooing bug in 1957 in Bombay. “It was a hand-tapped job of a Native American chief and cost six rupees,” he says. “But damn if it didn’t look good. I couldn’t wait to get another!” Jimmy later moved to Toronto and, during 1959-1965, skipped between Canada and New York City as a greenhorn tattooist. He came back to Athens in the late ’60s and began tattooing out of his home in 1973. The studio opened four years later, despite that fact that tattooing was an illegal profession in Greece at that time. Jimmy persevered, however, and after five years of fighting city officials, “Jimmy’s” was finally licensed in 1982 as the first tattoo studio to operate in Athens, not to mention Greece!

Jimmy’s (open 10 a.m. to 7 p.m., Monday through Saturday and by appointment on Sunday) is the only tattoo studio in Pláka, but according to Paul, there are at least 30 others around town and probably 50 more home studios. Paul, who has been tattooing since 1980, enjoys the opportunity to create a lasting work of art. He told me, “I’ve always been attracted to the beauty, the passion, and the spiritual energy of tattooing, and when it all comes together, you express life through artistic creativity on other people’s skin. For me, tattooing is one of the most respectful professions I can think of. It’s an experience in life.”

The clientele at Jimmy’s extends to Greek models, soccer players, actors, doctors, attorneys, and sometimes, tourists. Since Jimmy himself is legendary, Paul believes that “90% of all Athenians who are looking for a tattoo pass through our studio first.” Plus, being located on Acropolis Hill doesn’t hurt either. It’s one of the most amazing views you can find in the ancient world!

Paul said that tribal motifs and designs are popular in Greece. “We do a lot of Native American tribal work, much more than traditional Greek, probably because they have their own religion and a sense of place in the world, similar to the ideals of many Greeks. Greeks live by their religion and culture.” But Paul is not only a philosopher, he is a student of tattoo history. He noted that, “Tribal styles are probably popular too because of the long history of tattooing in Greece. Like the nomadic Scythian warriors who at one time lived in Greece; they were covered with tattoos. Tattooing is an ancient experience and most of the tribal peoples, like the Scythians, had darker skins, and that’s why their tattoos were so bold and dark in the ancient world, so people could see them and be fearful. Modern Greek skins are much lighter and we work more on shading today. It fits better with our skin type. Actually, the skin of a typical Greek is 30 percent more difficult to work with than other Europeans. It’s thicker. I think it’s the food, drink, and culture,” he says.

As our discussion turned to more modern primitives, Paul surprised me when he began to shed light on the ancient tattooed tribes still living in Greece. “Some of the oldest tattoos in Greece are worn by people in the northern Píndhos Mountains. My father told me that women have crosses tattooed between their eyes and maybe elsewhere. I don’t know any of the villages, or where to look, but you might find something there.”

After hearing that anecdote, I was completely spellbound. Having traveled to Alaska and Borneo in search of traditional tattoos, I never expected to find any in Greece. But after a few sips of wine, my curiosity got the best of me and I rented a car and drove north, searching blindly for the last remaining tribal tattoos of Greece!

I headed first to Kastraki, the town famous for its monasteries perched on pinnacles of rock, suspended in air. It was here, at the monastery of the Holy Trinity, that the James Bond film For Your Eyes Only was shot back in the late ’70s. Inquiring at local restaurants for tattooed elders, I was dumbfounded to learn that my waitresses’ 94 year-old grandmother had tattoos! But I arrived too late and, unbelievably, she was close to death, too ill for me to interview or to photograph. So, I didn’t press any further. All I could learn is that she had a large cypress tree tattooed on her forearm and a cross between her eyes. These descriptions matched those of Travelin’ Mick’s discoveries in Bosnia of tattooed Catholics (see Skin & Ink, March 2001)!

Undaunted, I drove further (northwest to be exact) close to the Albanian border. And to my surprise, I hit pay dirt – well, almost. Walking in her garden, 96 year-old Giannoula Giannaki proudly displayed a large, faded crucifix on her right forearm. Unfortunately, she took a tumble only three days before and her entire forehead was bruised, obscuring the blue-black crucifix tattooed on her forehead. I was told that her mother had five such crosses tattooed on her forehead.

Giannoula, born in Albania, is one of a handful of tattooed Aromanian Vlachs living today. The origins of the Vlachs are obscure and most historians agree that they are the last remnants of a Latin-speaking population that existed in the Balkans since the Roman Empire. Their unwritten language, Arouman, has Latin origins (unlike Greek) and probably came through working relations with Roman Legionnaires, who trained locals to guard the Via Egnata, a trade route that snaked through the high mountain passes of the Pí­ndhos. As late as the early 15th century, the Vlachs were a powerful independent kingdom in parts of Bulgaria and Greece. But, within a century, the Ottoman Turks conquered the area and ruled for the next 600 years. 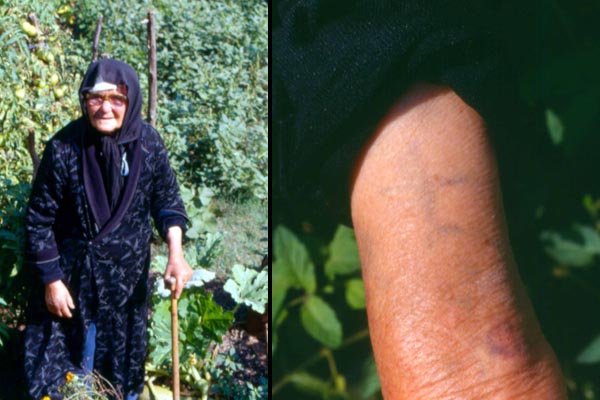 One of only a handful of tattooed Aromanian Vlachs living today, 96 year-old Giannoula poses in her garden. Note the bandage on her head, obscuring her crucifix tattoos. Giannoula also wears a large, faded crucifix tattoo on her forearm. © 2002 Lars Krutak.

Today the Vlachs are a minority population in an overwhelmingly Greek state. But they retain their traditional dress, language, and customs, including tattoo. Although increasingly rare, traditional tattoo exists on a handful of elder Vlach women. According to Giannoula, these marks not only reaffirmed her Orthodox Christian belief, but also affected powerful charms against the Evil Eye and other misfortunes. Furthermore, they protected her from the harems of the ruling Turks, because they despised “mutilated” women with forehead and body tattoos. The only other information I could learn about Vlach tattooing is that carbon was utilized as the pigment and at Vlach funerals lumps of charcoal were thrown to repel the spirit of the recently deceased. Old Vlach women were the tattoo artists.

I can’t say much more about Greece. It was a fantastic adventure. But if you are thinking about traveling in the Píndhos, keep your eyes peeled. You might get lucky and find for yourself a living example of the ancient tattooing traditions of the Vlachs. Better hurry, time is almost up!