THE PACIFIC OCEAN COVERS ONE-THIRD of the planet and washes the shores of numerous island chains, including Polynesia which literally means “many islands.” Roughly speaking, the geographical area of Polynesia forms a nearly perfect triangle defined by Hawaii at the northern tip supported by its two bases: New Zealand at the western edge and Easter Island at the eastern boundary.

When the first Europeans arrived on the beaches of Polynesia in the late 16th century, the islands were home to some 500,000 people. The Polynesians told stories about the descent of chiefs from gods, voyages of ancestral heroes, and myths of creation, not to mention the spiritual origins of tattooing.

By the early 18th century, European visitors to Polynesia began receiving tattoos as souvenirs from distant lands, or even after having been adopted by particular tribes. The naturalist Joseph Banks, who traveled with Captain Cook on his first voyage to the South Pacific, provided perhaps the earliest (1769) account of a Tahitian tattooing session. More importantly, he also recorded the local term for the custom (tatau or tattow), a word that has been borrowed countless times to describe this contemporary art form. 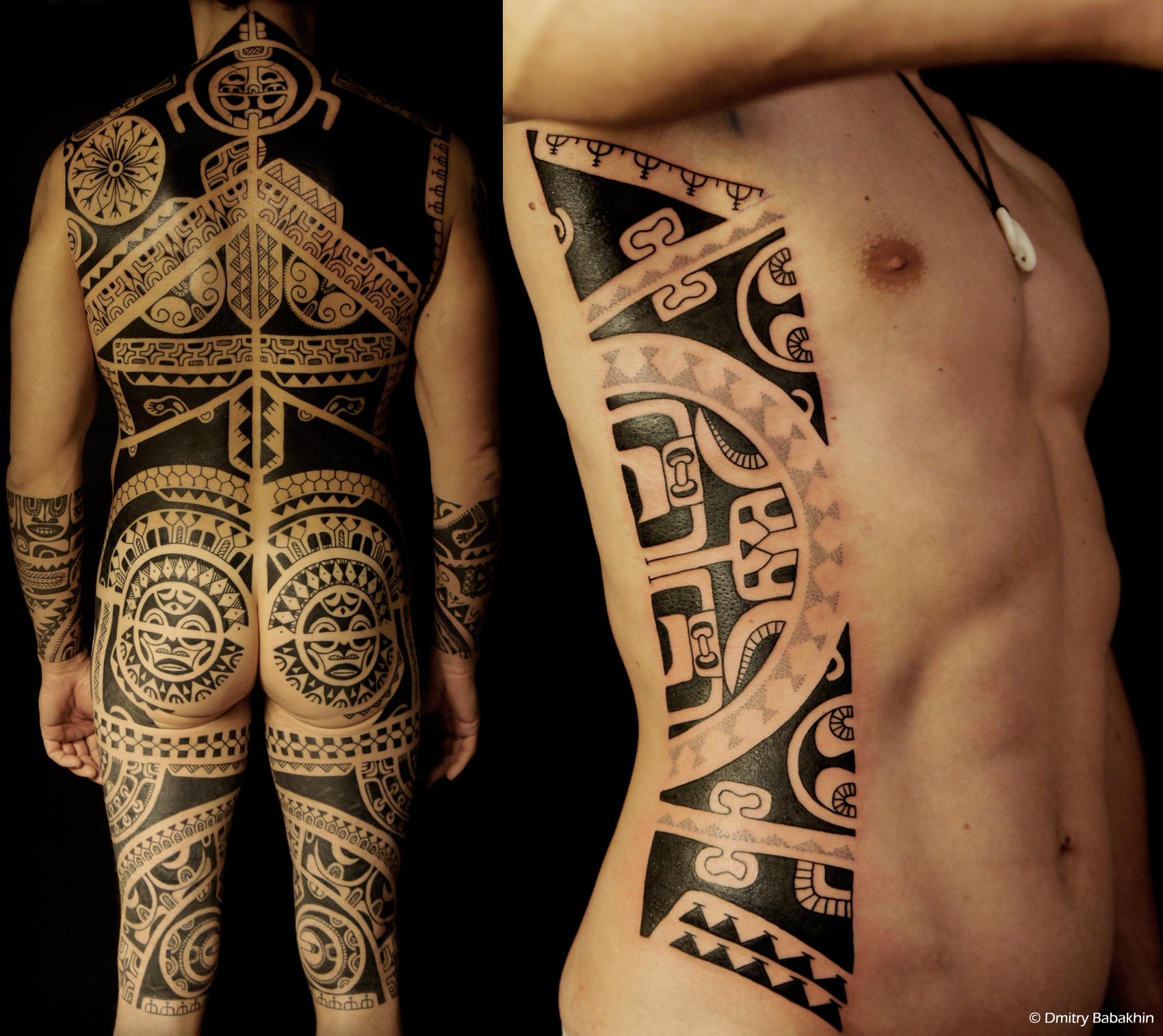 Ever since Banks set foot on Tahiti, members of numerous sailing expeditions to the South Seas began bringing back various forms of Polynesian tattooing to the West. Over time, these tribal styles of tattooing were copied, exchanged, and eventually transformed into new forms of tattooing. But the true beauty, power, and expression of Polynesian tattoo is rooted in its traditional iconography, because these bold blackwork motifs are believed to be embodied with a supernatural force called mana – a sacred impersonal force existing in the universe.

One talented Russian artist, originally a seafarer by trade, who has been captivated by the aesthetics of Polynesian tattooing since he first set sail on the High Seas is St. Petersburg-based Dmitry Babakhin. Babakhin, who also organizes an international tattoo convention in his home city, rarely works outside of the Polynesian style, and he tells me that he received his first tattoo at age 14. “That year, me and my friends got our hands on some foreign tattoo and rock magazines. I saw this very cool tribal tattoo done by Leo Zulueta, and I loved it! So my friend inked it, but I was not very pleased with the results. After seeing how he did it, I started experimenting and eventually I made my first machine a few years later from a cassette player and guitar string. That’s when I began tattooing – tattooing clients onboard ship when I was a sailor. In 2000, I began tattooing professionally in an old-school studio and never looked back.” 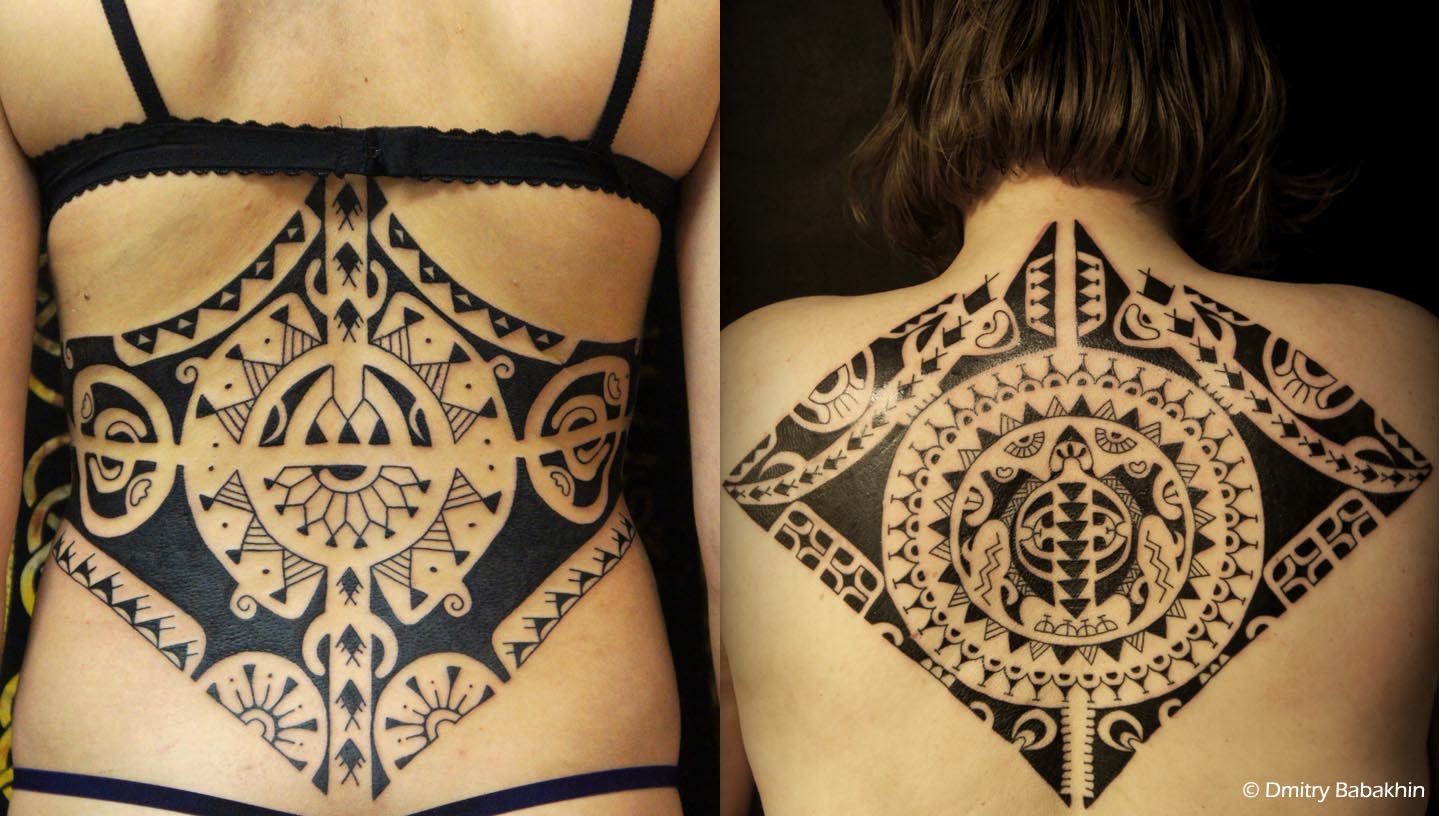 Obviously, St. Petersburg is a world away from Polynesia. But it is home to the Hermitage and Kunstkamera, two incredible museums that house large collections of Polynesian artifacts that have contributed to Babakhin’s interest. In the 19th century, it was also home to the swashbuckling Russian explorer, scientist, and writer Nicholas Miklouho-Maclay who traveled across Polynesia, Micronesia, and Papua New Guinea, documenting Indigenous tattooing traditions never seen before in Europe. Babakhin also draws inspiration from his personal collection of Polynesian objects, photographs and rare books, most of which he acquires from art and antique dealers in Europe.

I asked Babakhin if tribal tattoo is popular in Russia. “It’s not extremely popular yet and mostly consists of a small, elite clientele. More or less, it’s a subculture, but people are drawn to the cultural and spiritual roots of the tradition. Obviously, people around the world are aware of our criminal tattoo culture here in Russia because it is part of our tattoo history, and most Russian tattoo artists working today create realistic works in black and grey. But Polynesian tattooing is bold, black, geometric, and abstract, so this sets me apart.” 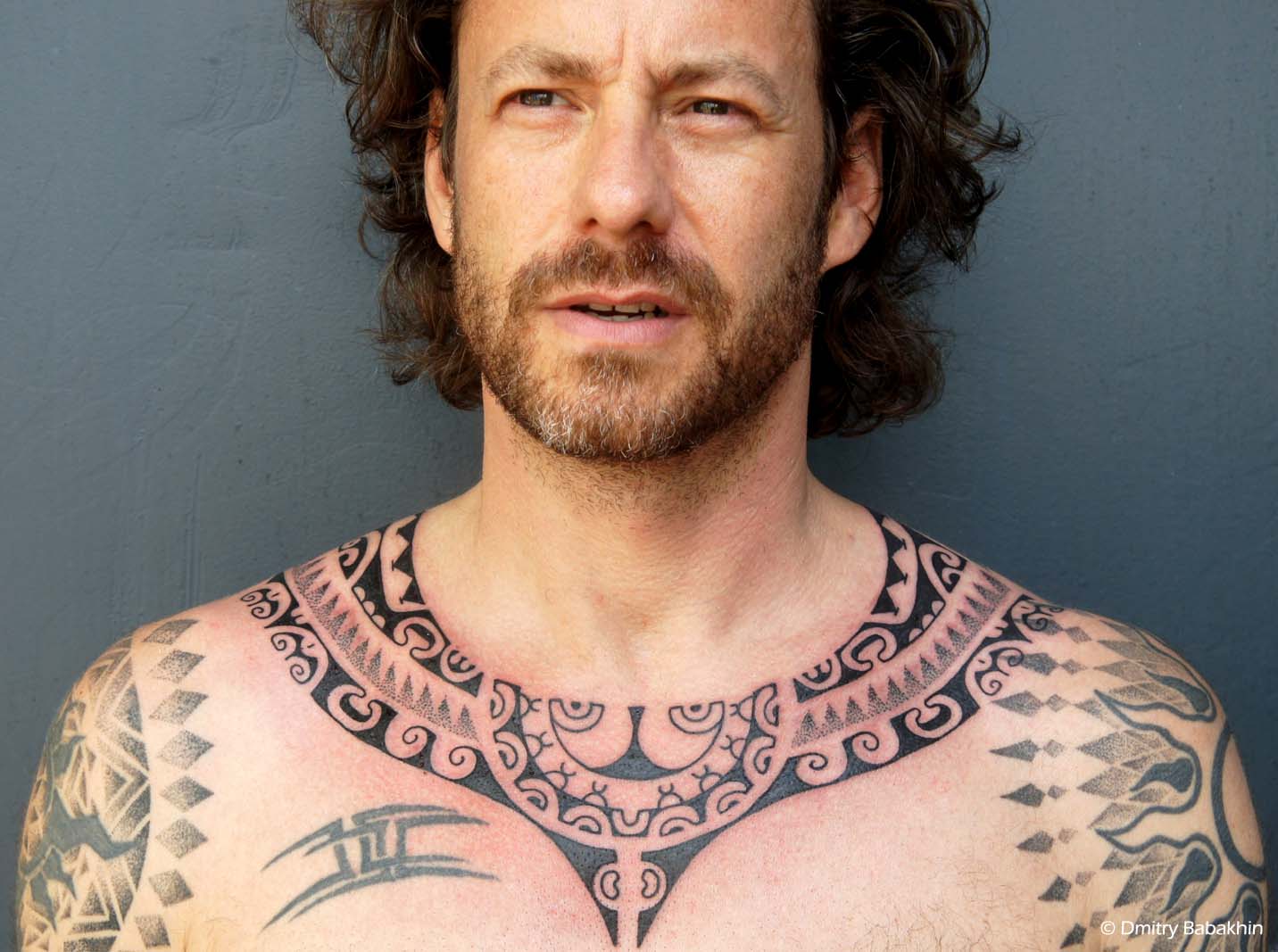 Babakhin also travels widely around Europe tattooing international clients at conventions, especially those that attract many tribal tattooists (London, Milan, Frankfurt, Paris, Berlin, Florence), and guest spotting at shops that promote traditional tattoo styles and techniques. “In the last year, I did guest spots with my Skin & Bone tattoo family in Copenhagen (Denmark), Seven Seas Tatau in Ymuiden (Netherlands), and with the Voodoo Croo family in Erding (Germany). These are great places to exchange ideas, develop new techniques and patterns, and find inspiration from some of the best tribal tattoo artists in the world.”

Although Babakhin does not create his customized tattoos through the traditional Polynesian hand-tapping technique, his artistry is high acclaimed and in 2013 his colleagues voted him Artist of the Year for the Polynesian Tattoo Awards. Babakhin’s expertise stems not only from his technical abilities but also from knowing how to read bodily contours and accentuate them with artistically rendered blackwork patterns. For Babakhin, anything is possible, and his creative scope is seemingly unlimited.

Babakhin’s tribally infused works convey the endless possibilities of tattoo art that can be created with Polynesian blackwork, and these complex, eye-popping patterns ignite the visual senses in profound ways.

For more information on the artist, please visit his website and studio.