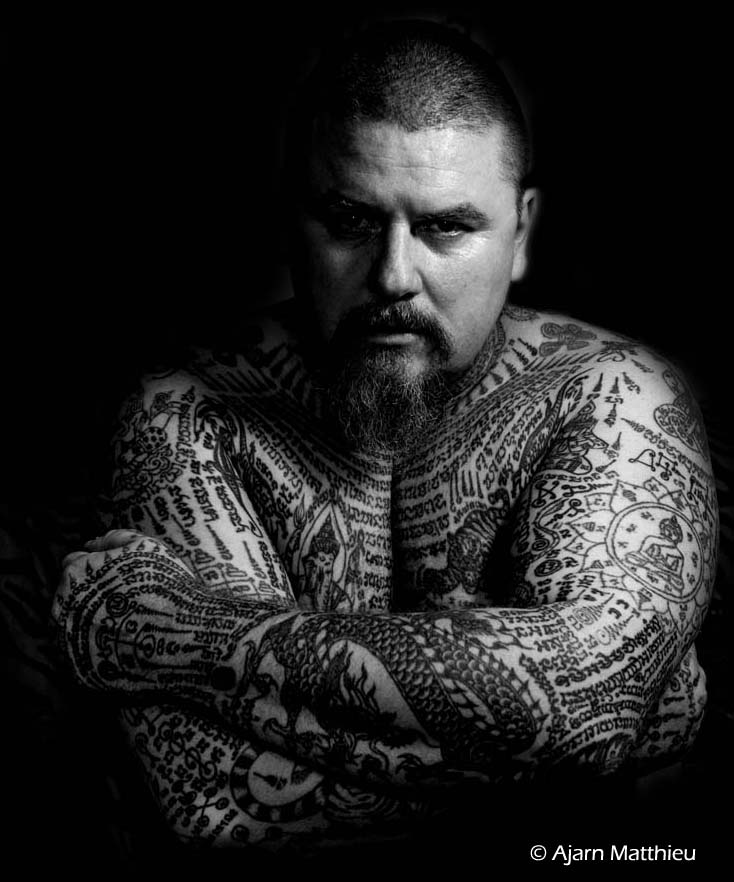 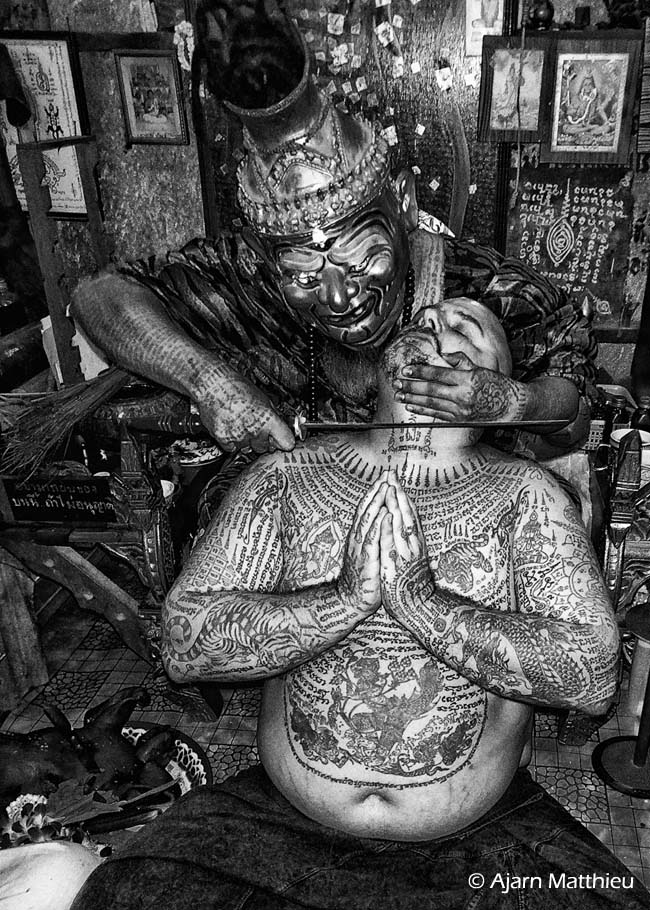 Ajarn Toy of Bangkok attempts to cut Matthieu’s skin to test the power of the tattoos.

TATTOO MASTER AJARN MATTHIEU DUQUENOIS sits beside an elaborate altar of dozens of statues of Buddha, offering bowls, pictures of revered monks, tiger sculptures, charmed amulets, and masks of the sage Pho Kae (Old Father), the wise hermit or ruesi who is believed to have begun the tradition of magical tattooing or sak yan in Thailand. A tattoo devotee soon approaches Duquenois on his knees and provides an offering placed on a platter which contains gifts: flowers, candles, betel nut, tobacco, and a donation of money, among other things. Raising the offering tray above their head, the disciple now presents it to the master who blesses it. An incense bundle is lit to summon the spirits of past tattoo masters in Duquenois’ lineage and then he blesses his elongated tattooing needle before plunging it into his client’s skin.

For more than a thousand years, the cabalistic art of sak yan, literally “to tattoo a sacred (or magic) design,” has been a significant part of religious life in Thailand. Integrated into a system of belief encompassing Theravada Buddhism, Hinduism, animism and ancestor worship, sak yan evolved into a kind of magical literature written the body that disciples (luksit) use to navigate through an uncertain, unpredictable, and imperfect world dominated by human enemies, deities, spirits, and the dead.

Largely administered by holy monks and layman tattooists, the esoteric art of sak yan is not only believed to provide its wearers with indelible protection from a variety of misfortunes, but also the mystical power to influence other peoples’ behavior, carry the deceased safely into the afterlife, or simply increase a person’s luck.

Tattoo masters (khru sak or ajarn) first apprentice for long periods under an older khru sak. And once the student has fully absorbed the master’s magical knowledge (weecha), a transfer ceremony takes place and the newly ordained ajarn takes his place in the lineage of sacred tattoo practitioners.

For nearly a decade, French-born Duquenois has studied the magico-religious culture of sak yan and the yantras (sacred or magic designs) that complete it. Visiting private sanctuaries (samnak) where these hallowed tattoo rituals take place, he has learned the rituals of Thailand’s most esteemed tattoo masters by apprenticing under many of them, while also becoming only the second European to bear the title of ajarn himself. He documented his journey with incredible photography – images that appear in this story.

Ajarn Matthieu’s magical tattoo adventure began in 2009 when he received his first sak yan at the age of 37. “I was facing a difficult time in my life and needed something spiritually to move forward so that I could progress. I began visiting several khru sak across Thailand, and I participated in different magical rituals. Eventually, I was tattooed by 25 of the 200 masters I met and suddenly sak yan became my passion, my obsession.”

The intimate scenes captured by Matt’s camera convey a profound landscape of spiritual faith. From the sacred tattoo rooms of ajarns and Buddhist temples to the bloodied and newly consecrated skins of sak yan disciples, these mystical realms offer a metaphysical statement on the meaning of human belief and life itself. 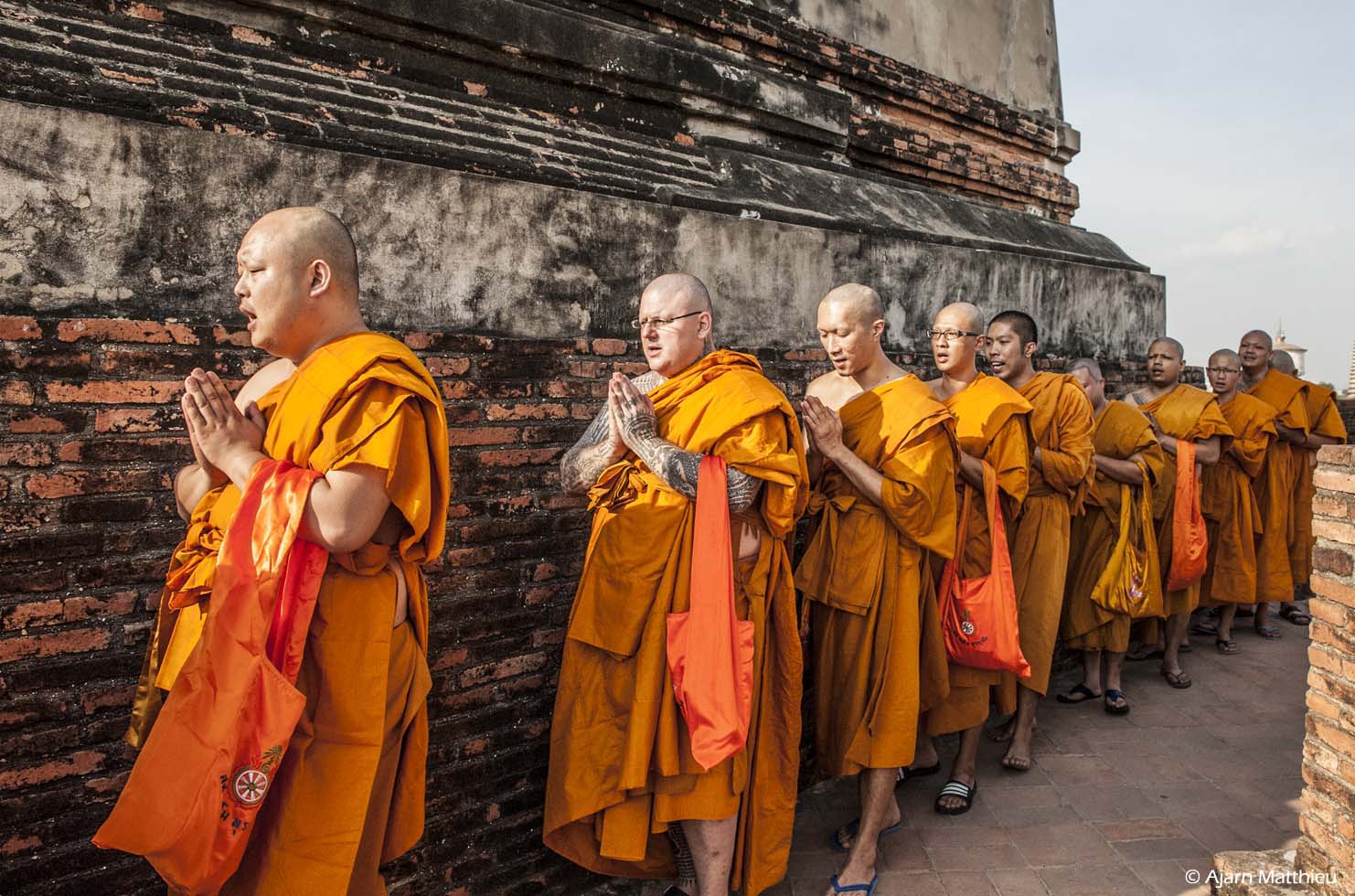 To prepare himself for the world of sak yan, Duquenois devoted himself to Buddhism and became a monk for a short time. 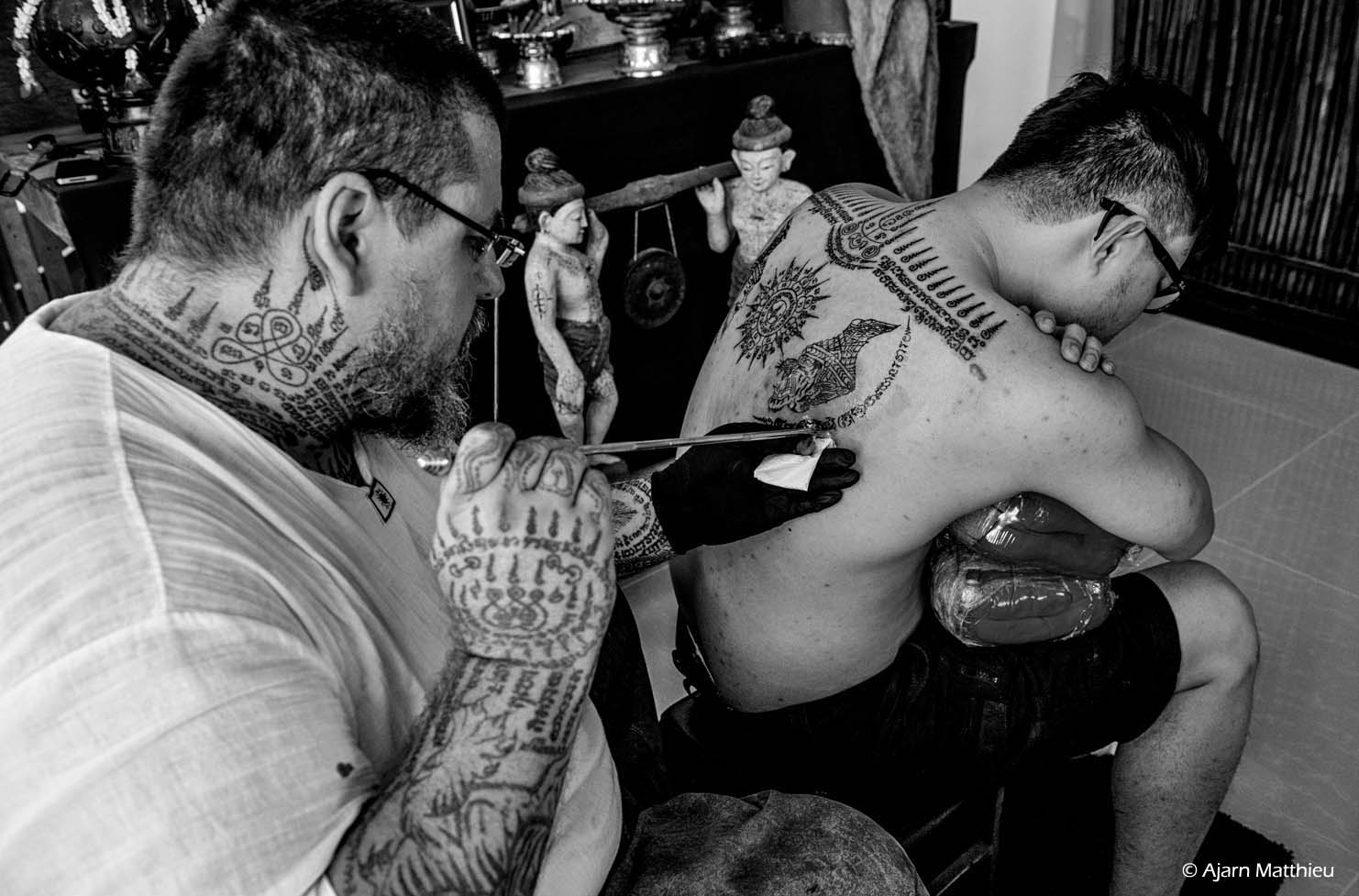 “I became a Thai tattoo master, an Arjan, in different steps,” Matthieu says. At first, my wife Rung and I joined three other Thais to become students of the renowned khru sak Luang Pi Man. We participated in a ceremony called ‘Yoke Pan Khru’ in which we made a special offering to the master who accepted us into his lineage and started to teach us the khom script – the sacred calligraphy of sak yan – and basic tattoo techniques. At this point, I still wasn’t thinking about tattooing people but on the second day of my apprenticeship my master compelled me to give a Hanuman tattoo to a devotee.”

“Every year while I was apprenticing I would attend the Wai Khru or Master’s Day of the late Ajarn Thong, one of the greatest and most respected tattoo masters of this century who started tattooing me four years earlier. During Wai Khru, devotees come to have the power of their tattoos “reactivated” or tested for efficacy and power. Thong was told that I had started to learn the sacred art of sak yan, but instead of the standard blessing he gave to his disciples he blessed me with a very special one, called Krop Khem, that conferred the title of tattoo master upon me. He presented me with a tattooing tool (mai sak) and a book (tamla yan) of sak yan designs and secret formulas he had learned from his master. According to the other masters of Ajarn Thong’s lineage, he gave me this honor because he sensed something in me. He then told me that I would now continue in his path and become a full time tattoo master. That same year, I became a Buddhist monk for a short time in order to purify myself and prepare for the tattooing that was to come.” 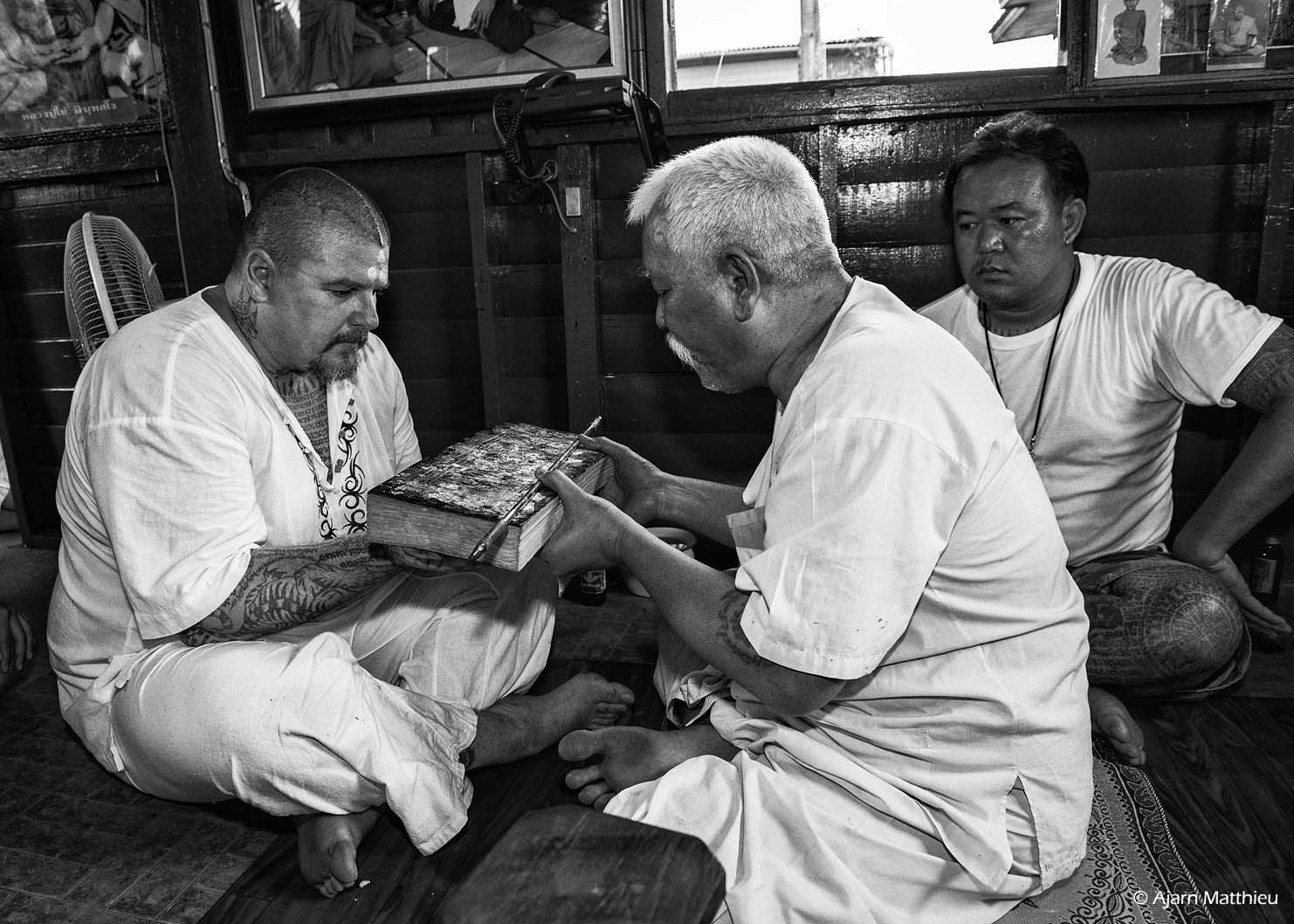 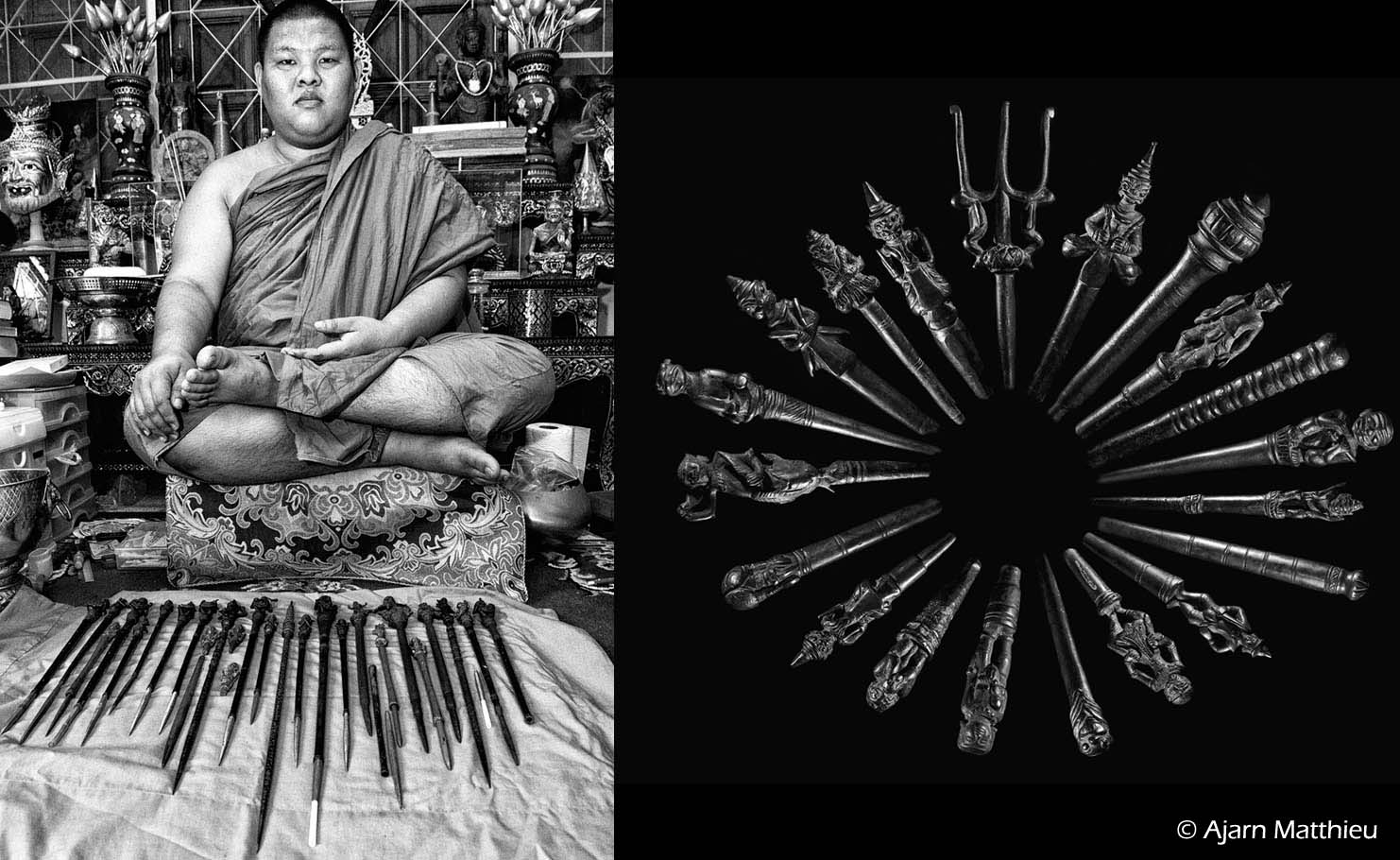 Ajarn Luang Pi Man in his temple with a collection of tattooing needles or mai sak and another collection of sak yan tattoo weights.

Some monks in Thailand make tattoos that are so precise that they look almost machine-made. I asked Ajarn Matthieu to tell me what he found was most difficult about the sak yan process.

“As a foreigner, making genuine sak yan nowadays is a real challenge in many ways. Many people think it is easy to tattoo a sak yan design because they often see monks or laymen using stencils. But the meaning of these designs stem from a combination of many complex factors. First, the master tattooist has to be part of a lineage of masters. The more powerful the lineage, the more powerful are the master’s tattoos. We also have to respect a certain amount of rules of conduct and respect the lineage and the Buddhist precepts. The most difficult is the apprenticeship where we must learn and memorize scripts in a variety of ancient languages like Khom, Pali, Lanna, Tai Yai, and Burmese, not to mention countless mantra chants. We chant these mantra loudly or silently to pay respect and call the spirits of our masters, to bless the body of the devotee before starting tattooing. During the tattooing ritual we keep chanting specific mantra for each yan design, each curve, or each script we ink. It is a very complicated and secret process. Each tattoo master keeps his own secret spells and they are different from one lineage to the other. That is why only a tattoo master can bless his own tattoos. Once the physical tattoo has been completed, it needs to be activated or empowered with more mantra chanting and blessings. My wife and I are still learning from our ajarns and it will take us years to become accomplished sak yan masters.” 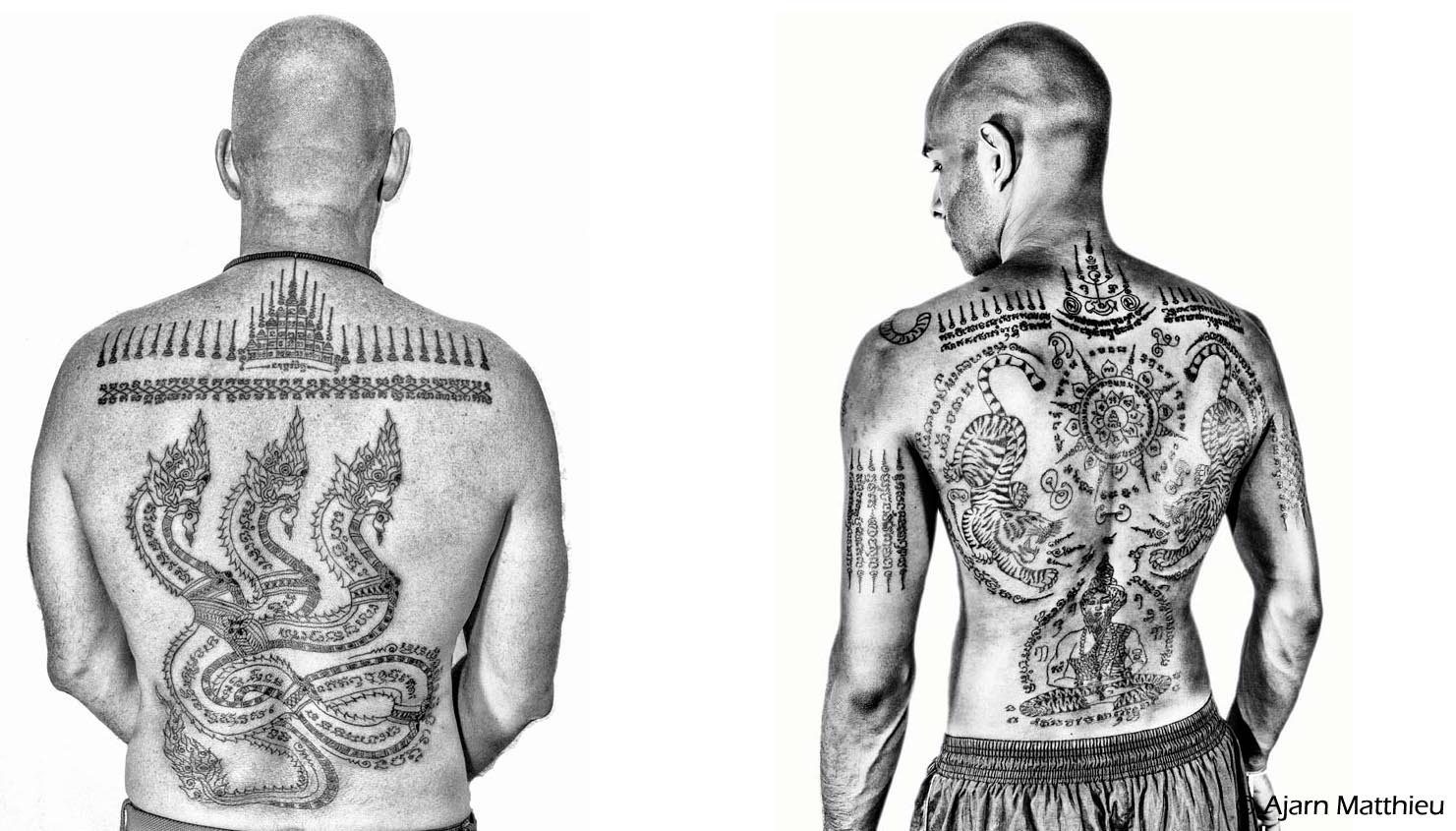 (Left) The three-headed Naga yantra is employed to make the disciple more confident and stronger. Like tigers and Hanuman yantra, these powerful tattoos cannot be worn by just anyone. The disciple has to be able to control the power of these tattoos, otherwise they may prove fatal. (Right) Backpiece depicting yantras for strength and courage (tigers), universal protection (neck), and knowledge, healing, and protection (sage Pho Kae) on lower back.

For centuries, ajarns have marked human skin with powerful animals (tigers, centipedes, turtles, lions), deities (Garuda, Ganesh, Hanuman), hermit sages (ruesi) and symbols in their quest to render the body everlasting and invincible. Drawing on knowledge of astronomy, sacred geometry, holy texts and incantations, the khru sak plunges his large tattooing needles into the flesh to render a rich visual mosaic of tattoo iconography that is at once a blessing of protection and personal sacrifice to the supernatural.

But according to Duquenois, these incredible traditions are in danger of vanishing. 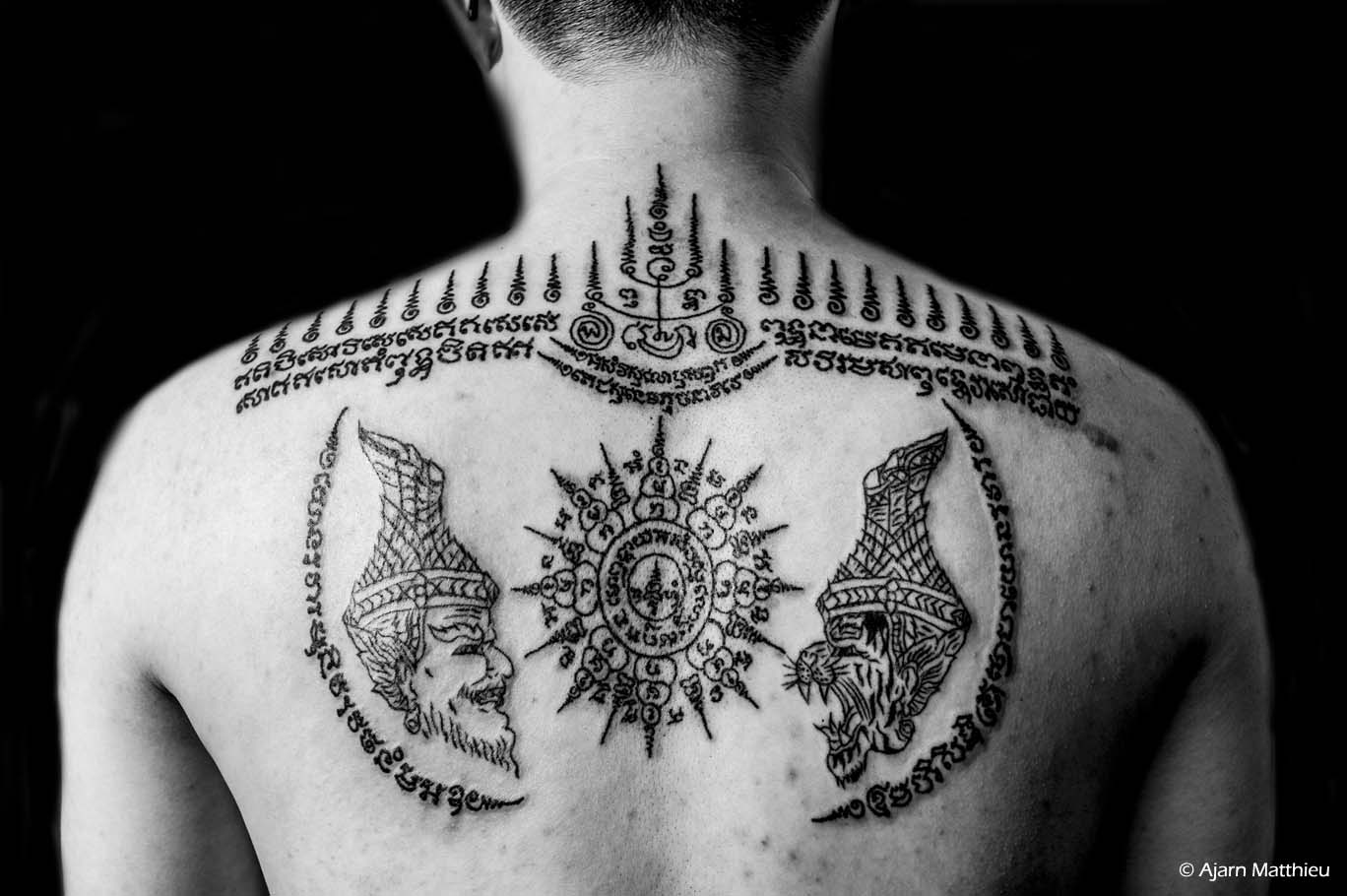 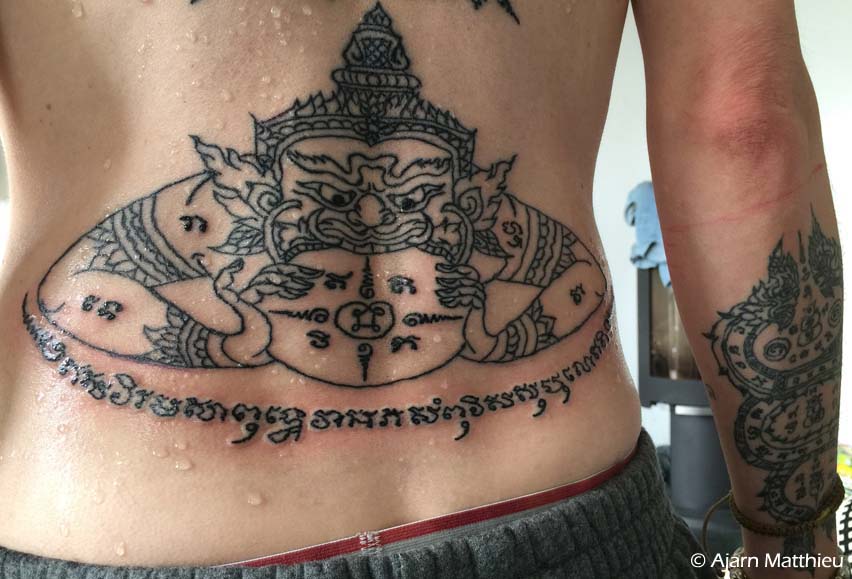 Rahu ‘Eating the Moon.’ The Rahu yantra symbolizes that all evil will be eaten by this demon deity.

“Indeed, sak yan is gaining in popularity and can easily be machined at a rapid rate. But genuine Thai magical tattooing with full traditional ritual is slowly disappearing as the elder masters pass away. Although there are new tattoo artists practicing now, very few of them totally dedicate themselves to the tradition, learn the requirements, and respect the lineage. Although I just used the term ‘tattoo artists,’ my wife and I don’t really consider ourselves to be among them. For us, the tattooing ritual is the medium to instill the required magic into the devotee’s body. Our credo is to listen to people’s needs, sometimes their distresses, and try to temper or balance them with the proper yantra and mantras to complete them. In our view, the meaning of sak yan is to try to help devotees to reach their goals through the power of their tattoos. Sak yan often takes people down paths they never even suspected or expected. The animist roots of sak yan really attract me and I can feel a deep and ancient force in these tattoos, so you can see why they are not art to me.”

In order to keep the spirit of sak yan alive, Ajarn Matthieu and his wife are building the first tattoo museum in Thailand in their hometown of Hua Hin. Their goal is to help preserve the rich cultural and religious heritage of sak yan for future generations of students and disciples. 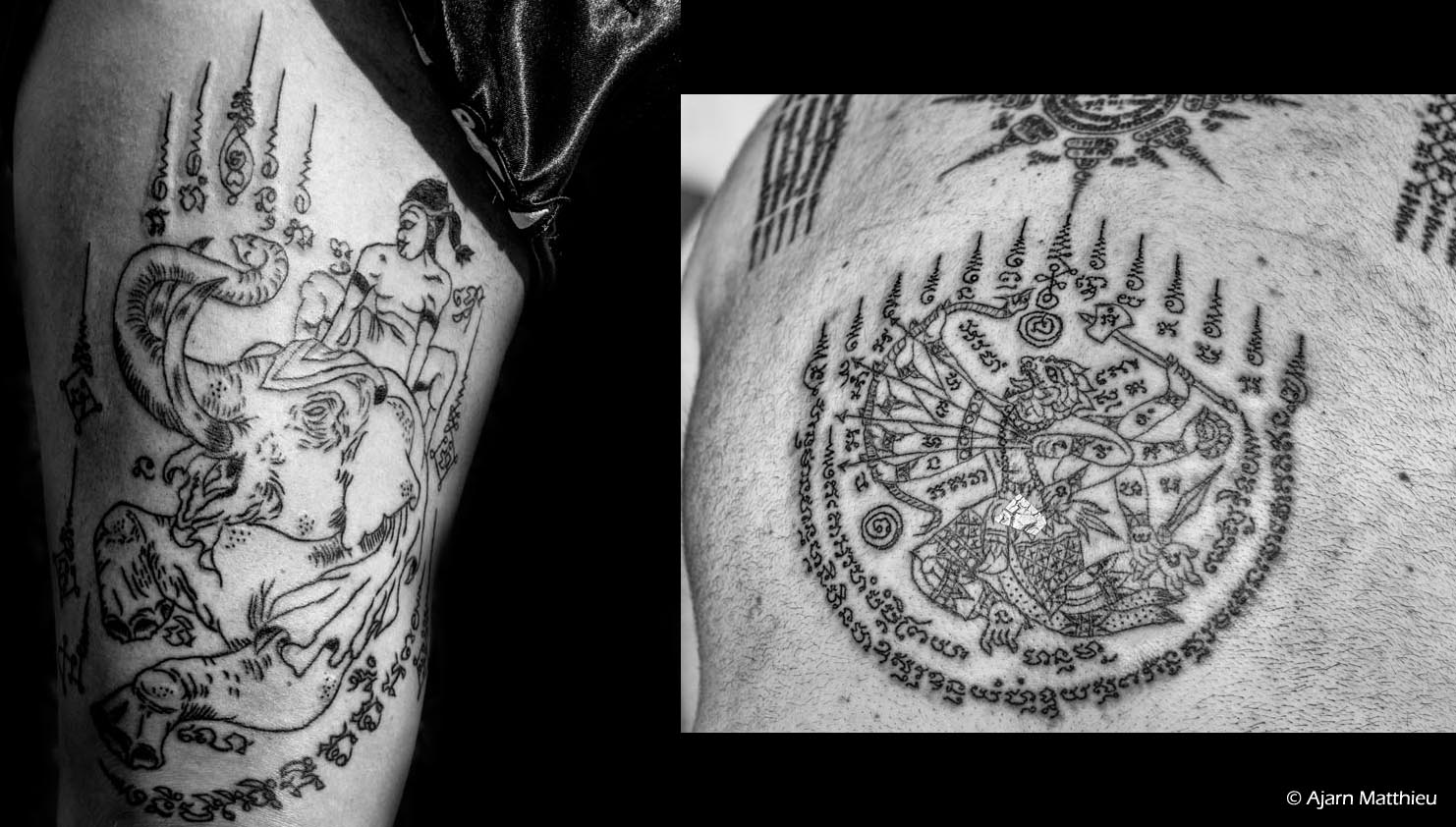 Nay Kanom Thom is an elephant yantra symbolizing great strength, courage, and self confidence and is often used by Thai fighters and boxers. Close-up of a Hanuman yantra.

“The Museum project came out as an urgent necessity to save and protect vanishing tools and objects related to Thai sacred tattoos, but also those from Burma, Laos and Cambodia because all of these tattooing traditions share the same roots. By the end of the year the collection will hold 600-700 different pieces. Bronze tattoo weights, different types of ancient needle tips, wooden stamp blocs, ink pots, magical ingredients, books of spells and lots of other accessories used by tattoo masters will be displayed. 80% of the proceeds we receive for our sak yan this year will be used to purchase as many of these objects as possible before they vanish completely. We are also reaching out to private collectors to acquire more objects to complete the collection.” 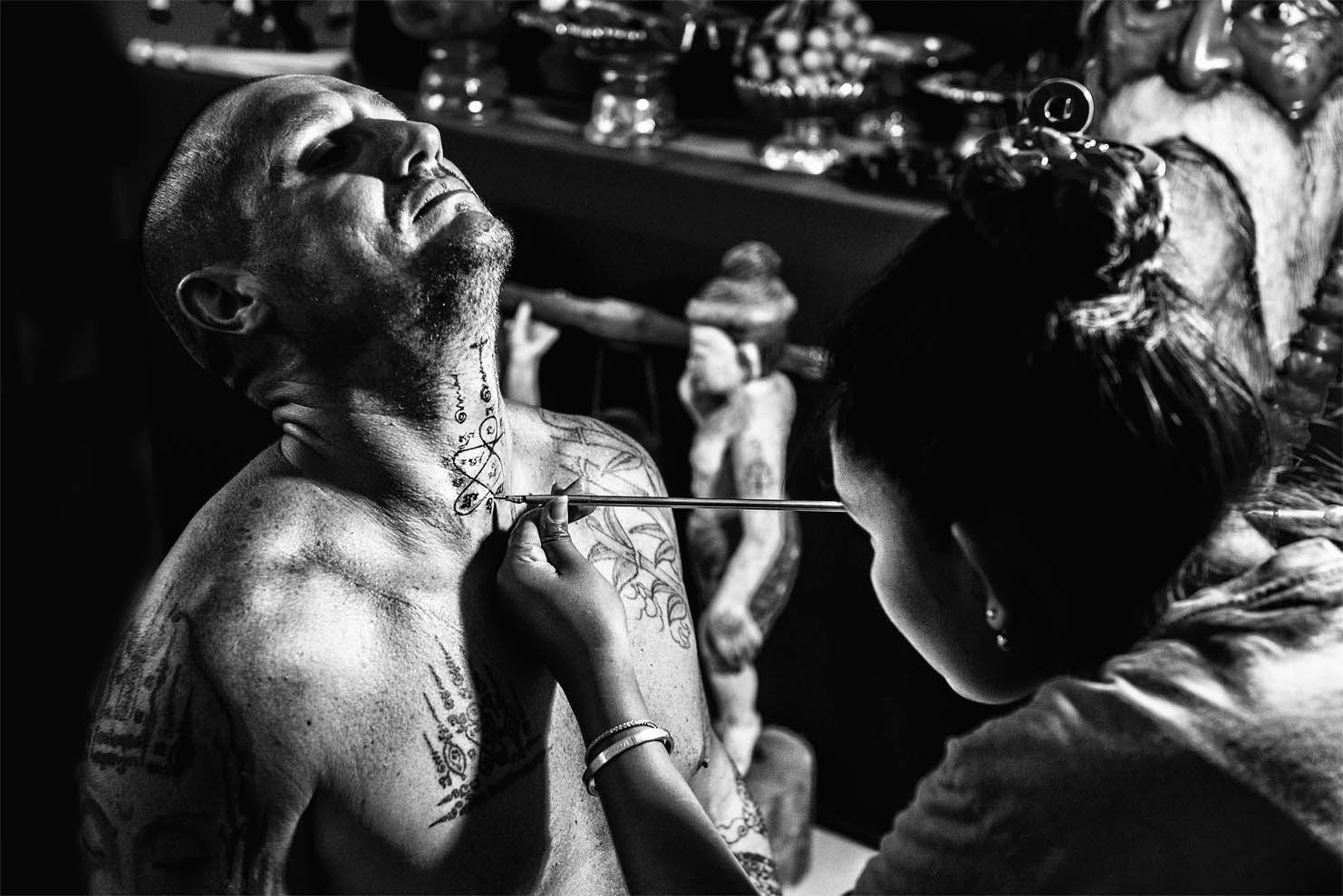 Matthieu’s wife Ajarn Rung, a tattooist in her own right.