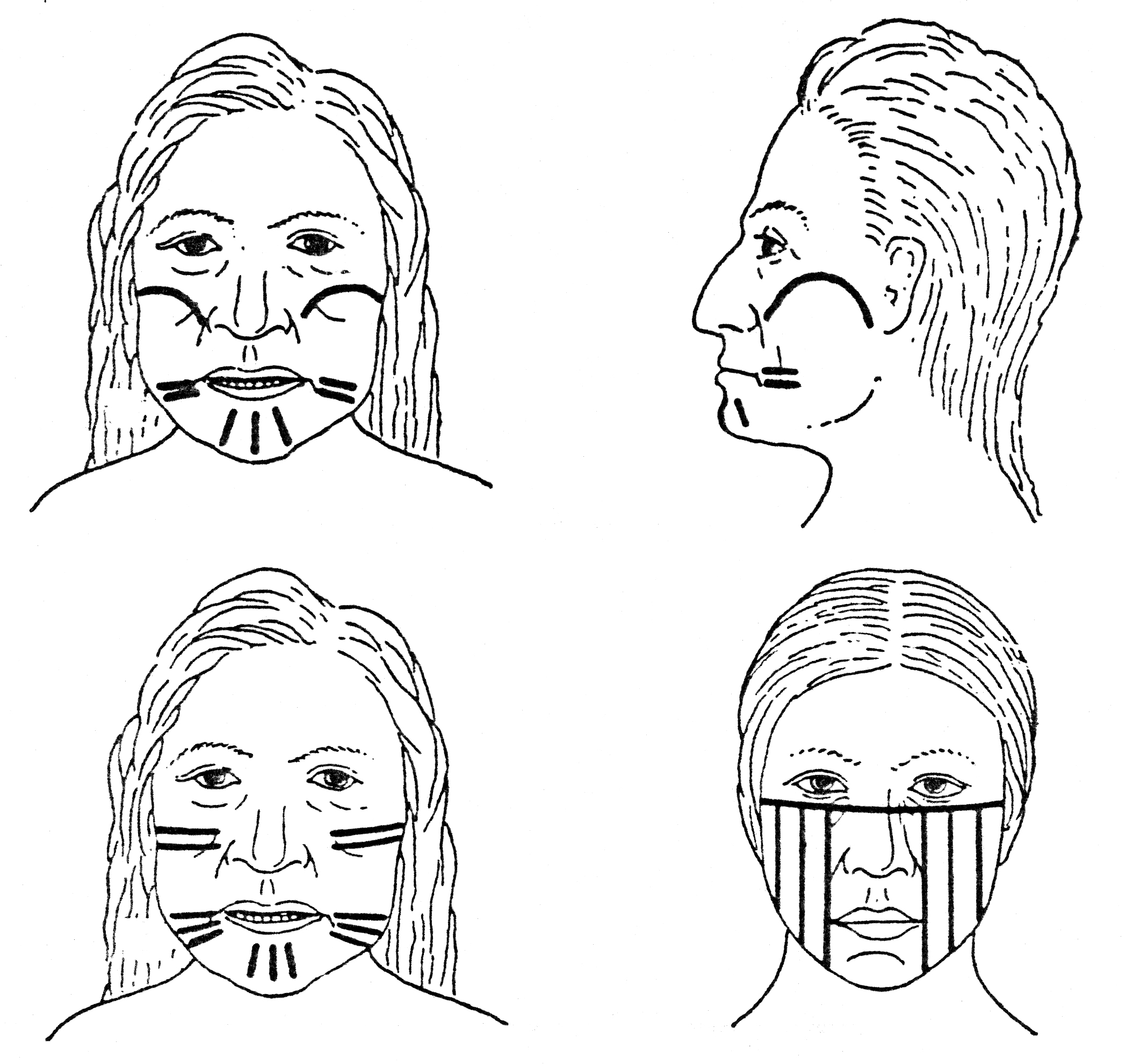 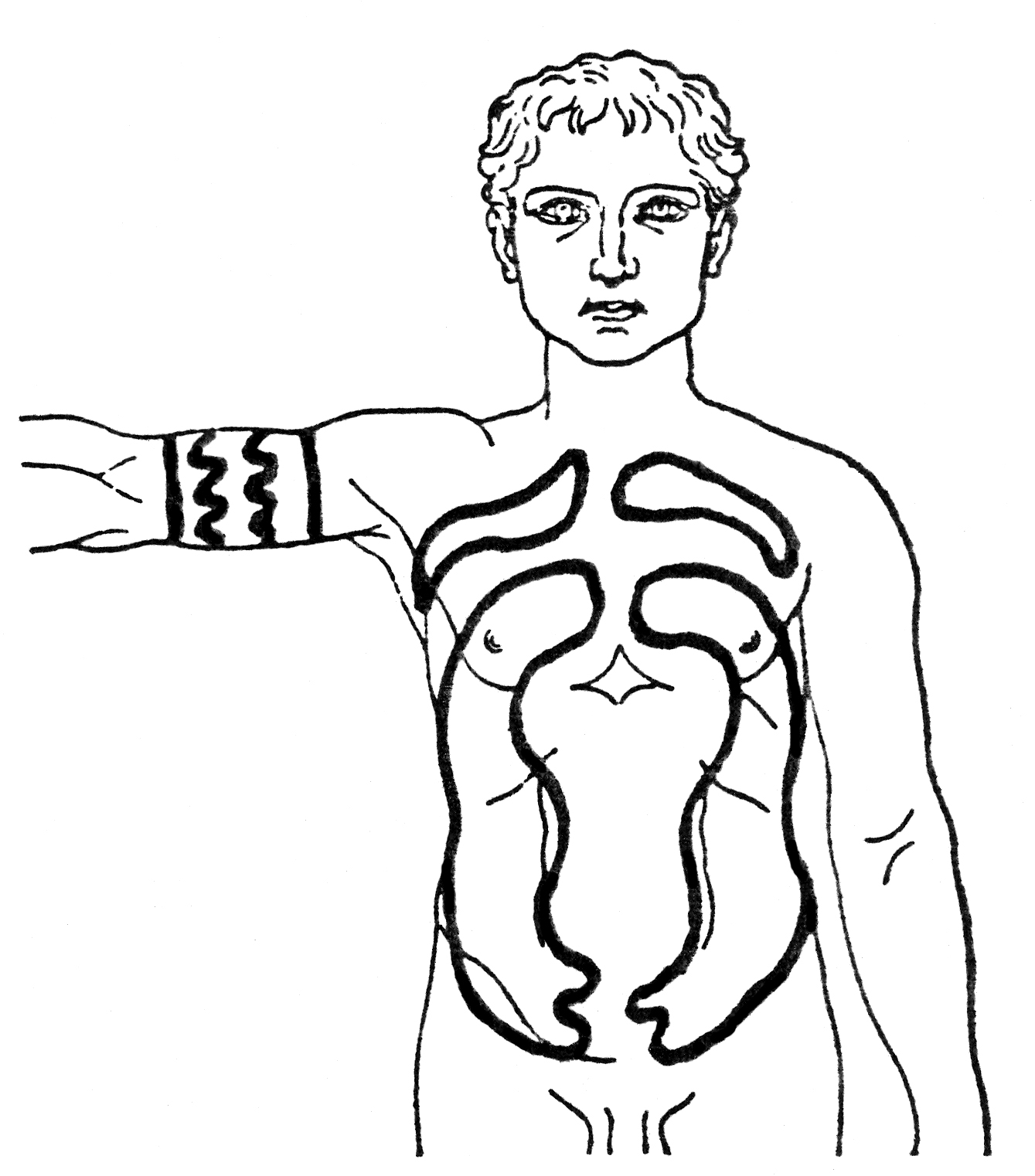 FOR THOUSANDS OF YEARS, indigenous peoples around the world marked their bodies with skin-stitched tattoos. This painful form of body art was not just the latest fashion, it was a visual language that exposed an individual’s desires and fears as well as ancient cultural values and ancestral ties that were written on the body.

Although some of these tattoos did hold an iconic allure, others were believed to have had magical power and purpose. For example, three vertical bands tattooed on the cheeks of St. Lawrence Island, Alaska women were thought to induce fertility, while other configurations of markings were believed to protect them from unseen enemies or illnesses borne from evil spirits. Still more designs were thought to attract prey animals and even men. The Thompson River Salish (Nlaka’pamux) of Canada also tattooed for ornamental purposes, but they sometimes inscribed their bodies with thread and needle to show courage, to acquire strength, to or to display enduring fidelity and love in marriage. The Nlaka’pamux also marked their bodies to ward off death and sickness or to acquire a guardian spirit.

Sadly, however, skin-stitched tattooing has largely disappeared in the world along with its practitioners. In Canada, only one Inuit woman living on King William Island retains her elaborate facial and body tattoos. And to date, just a handful of Siberian Yupik and Chukchi women in Siberia continue to wear similar indelible markings.

TATTOOING IN THE ARCTIC

By far skin-stitched tattoos were most popular among indigenous peoples of the Arctic. In fact, this style of tattooing was practiced for over 2,000 years and was most common among women. As a general rule, expert tattoo artists were respected elderly women. Their extensive training as skin seamstresses (parkas, pants, boots, hide boat covers, etc.) facilitated the need for precision when stitching the human skin with tattoos. 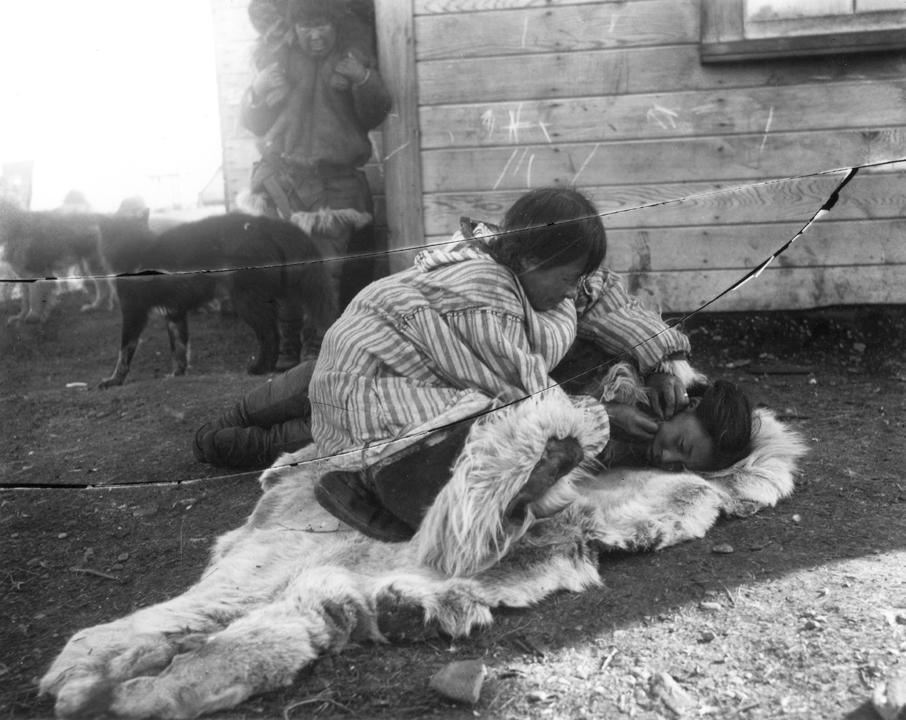 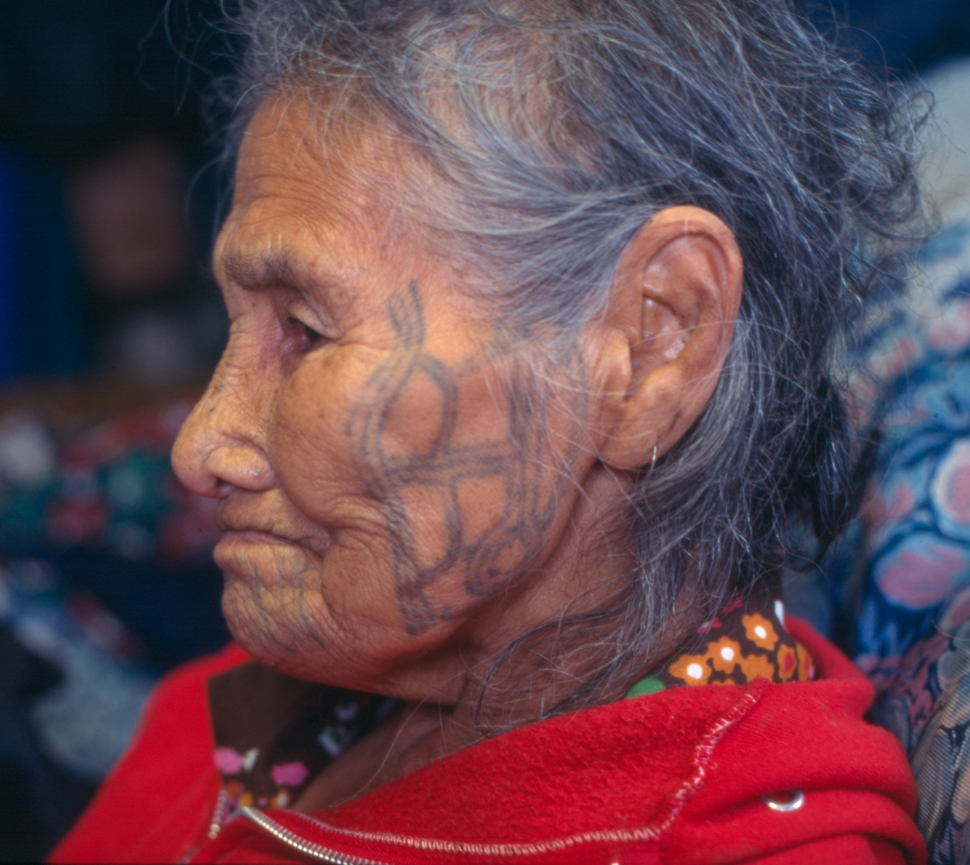 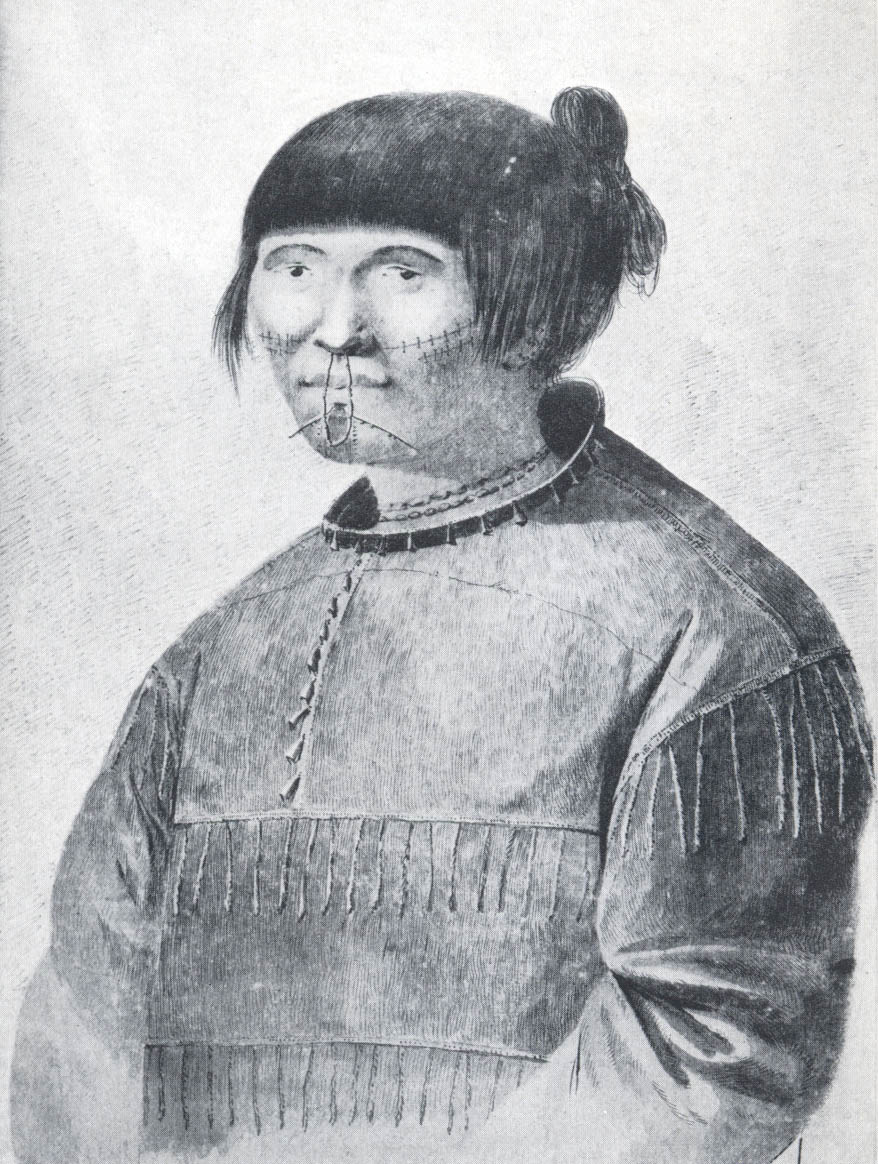 Tattooed Unangax woman of Unalaska Island, Alaska, 1778. Drawing by John Webber. Although the peoples of the Aleutian Islands used medicinal tattooing for complaints in their joints, the Russian priest Veniaminov wrote around 1830 that Unangax women from Unalaska Island (Alaska) wore skin-stitched tattoos across their faces and bodies because, “the pretty ones and also the daughters of famous and rich ancestors and fathers, endeavored in their tattooings to show the accomplishments of their progenitors, as for instance, how many enemies, or powerful animals, that ancestor killed.”

Tattoo designs were usually made freehand but in some instances a rough outline was first sketched upon the face, arms, hands, and other body parts that were to be tattooed. On St. Lawrence Island, the tattoo pigment was made from the soot (aallneq) of seal oil lamps which was taken from the bottom of tea kettles or similar containers used to boil meat or other foods. The soot was mixed with urine (tequq), often that of an old woman, and sometimes graphite (tagneghli) or seal oil was added. Next, a sinew (ivalu) thread from a reindeer was drawn through the eye of a needle and dipped into the coloring substance. This thread was then inserted just under the skin for a distance of about a 1/32 of an inch and after several stitches tiny dots began to form lines and other desired motifs.

Tattooing needles were traditionally made from slivers of bone, but as time passed St. Lawrence Islanders (Sivuqaghhmiit) began using steel needles for skin-stitching. According to one of the last tattooed elders, a very small bag of seal intestine was used to hold the tattoo needle: “they don’t use this needle for anything else, they just keep it in there and nobody else is supposed to touch it except the one who used it.” When anyone was injured either accidentally or willfully by the needle, it was not used again until the wound had healed. If sickness resulted on account of such an injury or if death occurred, the needle was taken with the body of the dead or it was destroyed.

The 5,300-year-old Iceman. Small lines of therapeutic tattooing have been found on his rheumatic joints, and 80% of the Iceman’s tattoos correspond to actual acupuncture points. Interestingly, archaeological evidence indicates that one of the earliest forms of tattooing was not medicinal but rather cosmetic. And around 3,500 years ago, at least one man of the Chinchorro culture of Chile was tattooed with what looks like a small mustache on his upper lip. It is believed that this tattoo was pricked-in rather than sewn.

Although ornamental and family designs were applied to most parts of the body (e.g., face, arms, torso and hands), medicinal tattoos akin to acupuncture were placed on particular joints. Of course, the Sivuqaghhmiit were not the only indigenous people to sport such markings. The 5,000-year-old Iceman wore similar medicinal tattoos at rheumatic joints as did members of the nomadic Pazyryk people who ruled the Siberian steppes some 2,500 years ago. The Unangax and Alutiiq of the Aleutian Islands also utilized this medicinal treatment.

The Chimú of Pre-Columbian Peru applied tattoo pigments with various types of needles (fishbone, parrot quill, spiny conch) which have been found in mummy burials. The technical application of tattooing was a form of skin-stitching, and it has been suggested that women were the primary tattoo artists.

Paleopathological studies of Chimú mummies (1100-1470 A.D.) indicate that the practice of tattooing was quite common among both males and females. In some coastal settlements, it has been estimated that at least thirty percent of the population may have been tattooed.

Interestingly, the Chimú seemed to have used the juices of the genipap (genipa americana L.) as tattoo pigment. Juices of the green, immature fruits of the genipap have and continue to be used as black body paint and tattoo pigment by historic and contemporary indigenes of South America. Among some groups, the coloring substance was highly esteemed because it was believed to repel incorporeal spirits. This was especially true of the headhunting Jí­varo and Mundurucú who painted themselves and their trophy heads with genipap to protect the victor from the spirit of the deceased. 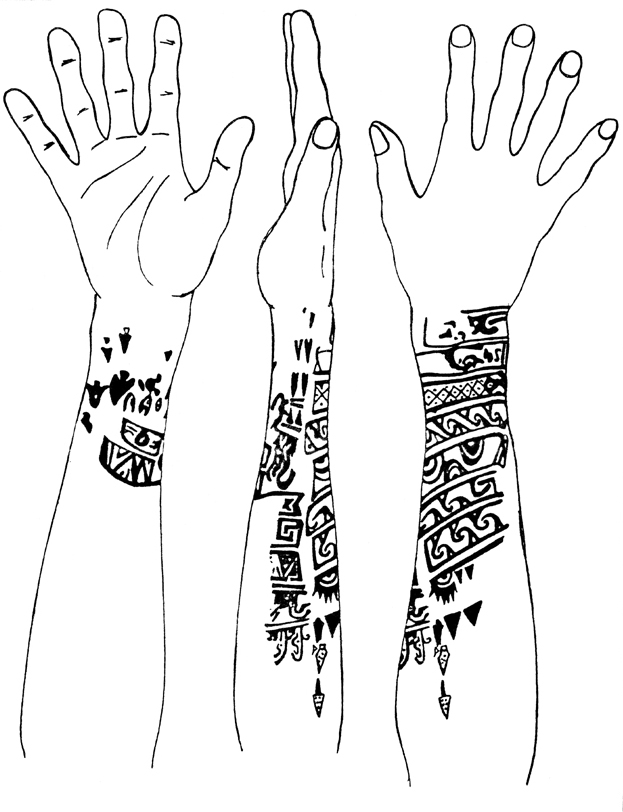 Chimú mummies with naturalistic and geometric tattooing, 1200 A.D. Drawing courtesy of Dr. Marvin Allison. Hidden in shifting sands along the coastal valleys of Peru, mummies of the Chimú culture have been discovered bearing intricate tattoos of animals, weapons, landscape features, and anthropomorphic deities. Similar designs were engraved into wood, silver, and hammered gold burial gloves. Tattoos of the sacred dead perhaps served as magical mediators between this world and the next by carrying the body into the afterlife. 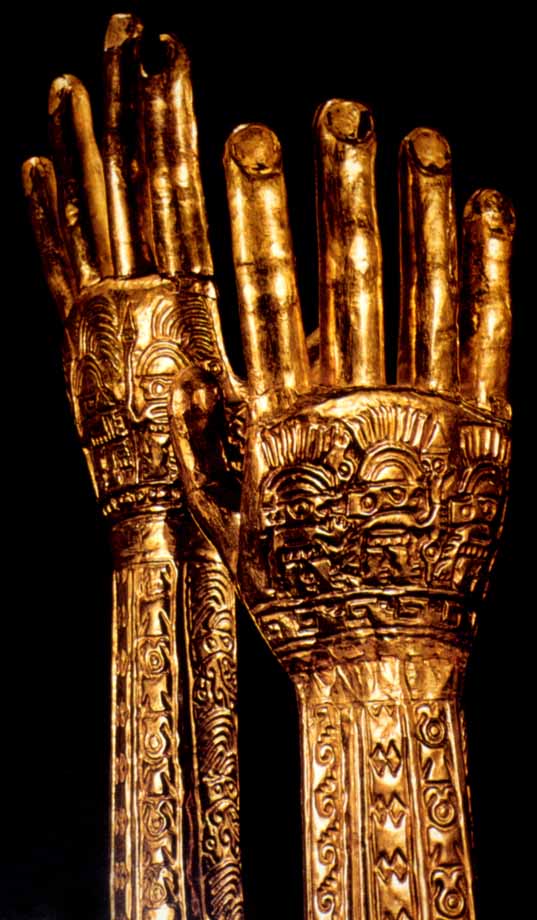 MANY STITCHES FOR LIFE

Skin-stitched tattoos firmly anchored indigenous values on the skin by creating a visual mosaic rooted in traditional practice. These tattoos not only satisfied the need for display and personal accomplishment; they also embodied religious beliefs about the relationships between humans, animals, spirits, and the ancestors who controlled human destiny and the surrounding world. Thus, as a system of tools and techniques by which indigenous people used to relate to their environment, community, and culture, skin-stitched tattooing expressed the many ways in which indigenous people attempted to control their bodies, lives, and experiences. 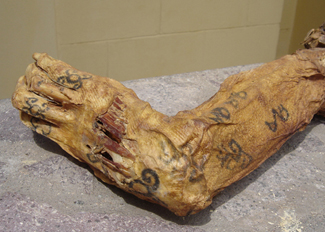 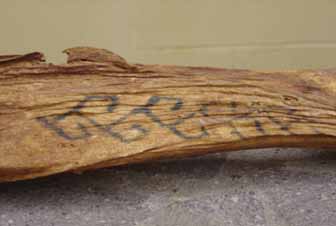