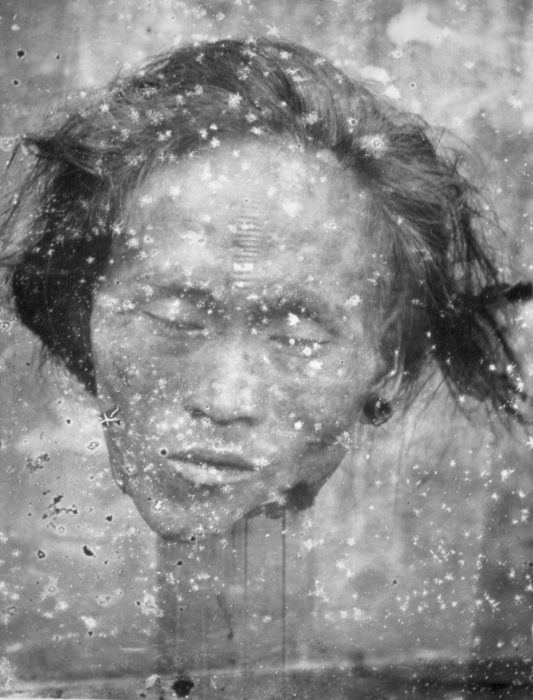 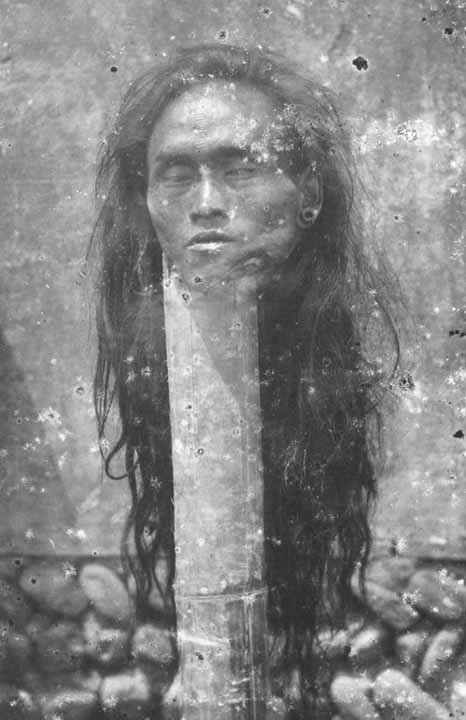 TAIWAN, formerly known as Ilha Formosa (Portuguese, “Beautiful Island”), is a mountainous island lying approximately one hundred miles south of Mainland China. Today perhaps less than two percent of the total population is indigenous occupying the central mountainous region, the coastal plains, and a large portion of the southeastern hill country. Traditionally, twelve, or more than one half, of the aboriginal tribes practiced tattooing. They included both plains and mountain tribes.

The earliest account of the tattooing custom was given in the History of the Sui Dynasty, dating to the 7th century (A.D. 607). But with the coming of outsiders in the 17th century (Dutch, Spaniards, Chinese, and later Japanese), tattoo rapidly lost its traditional meaning and began to disappear altogether. By the terminal period of the Ch’ing Dynasty (1644-1911), tattoo was extinct among the coastal tribes and by 1914, under order of the ruling Japanese, tattoo became rare among the mountain peoples. By 1950, only traces of the indelible art remained.

Aboriginal Formosans lived in all districts of Taiwan until large inmigrations of Han Chinese forced the “barbarian tribes” to withdraw into the central mountains about 300 years ago. This trend towards isolation continued throughout the fifty years of Japanese colonial rule (1895-1945) when indigenous peoples still remained relatively undisturbed from Western contact. However, by the beginning of the 20th century, the indigenous strongholds of the Atayal, Paiwan, Saiset, Bunun, and other “tattooed tribes” were threatened by the expanding camphor industry that increased the flow of outsiders and contributed to widespread rebellion and bloodshed.

Growing in immense stands in the Central Mountains of Taiwan, slow growing camphor trees were utilized in ship building and in the manufacture of mothballs, perfumes, and more importantly celluloid: a material that could be used to make medicines, combs, tobacco pouches, and billiard balls. Since the method of collecting camphor necessitated the clear-cutting of the forest, encounters with indigenous Taiwanese increased forcing the Japanese to take-up defensive measures to protect their economic interests. Expanding on the Chinese defensive system of aiyu-sen, or guard-line, the Japanese basically encircled the indigenous territories with military outposts connected by battle fences that were constantly being advanced as the Japanese conquered new camphor groves. Harry Franck, an American writer who traveled to Taiwan in the 1920s, described the aiyu-sen as follows:

The aiyu-sen, or guard-line, is a cleared space, from fifty to a hundred feet wide, climbing over hill and dale completely around the uncontrolled territory. It is started by cutting a road along the crest of a mountain, then destroying the vegetation on either side of this far enough back so that the guards can see attacking savages in time to defend themselves. This system dates back to the reign of Ch’ien-Lung, toward the middle of the eighteenth century, when the Chinese paid tamed savages to protect them against the others.

…The Japanese have constructed bulletproof, loopholed forts, barbed-wire entanglements, mines, and wire fences, the latter in some places locally electrified by harnessing mountain streams; hand grenades, sometimes mountain-and fieldguns, are used; on the east coast warships have occasionally been called upon to subdue belligerent villages… Today the guard-line is about three hundred miles long. 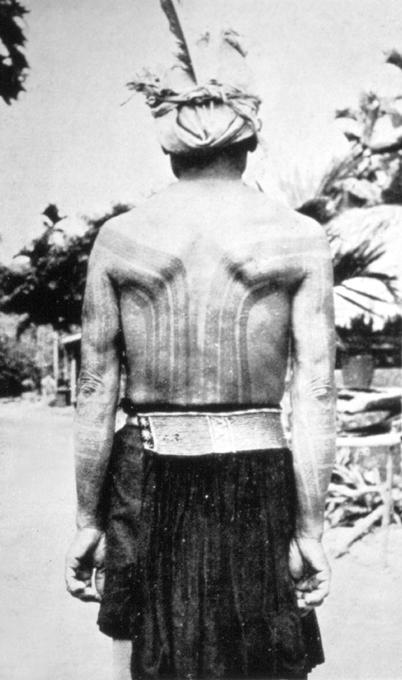 Paiwan headhunter’s tattooing, ca. 1930. Note the tattoo of the ‘hundred-pace viper”‘ in the center of the chest flanking the tattoo of a human head. These snakes were symbolically tied to ‘the spirit of life, the greatest of all spirits’ in Paiwan mythology. 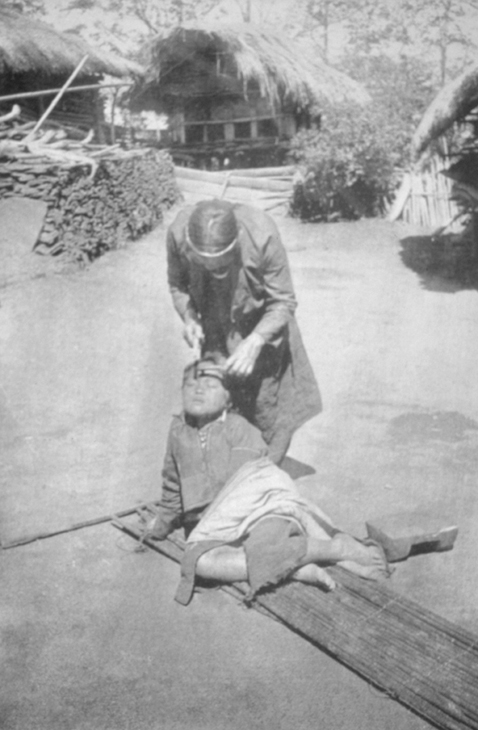 Hammering the tattoo home! An Atayal tattooist at work in 1910.

Between 1903 and 1908 there were seventy advancements made to the guard lines by the Japanese, but indigenous men in search of heads often came over or under the barrier at nightfall to lay waiting in ambush for unsuspecting victims. Headhunting, the primary ritual component of the Atayal, Paiwan, Saiset, and other groups, not only served to maintain the prosperity of society by ensuring agricultural and community fertility through the propitiation of the deities and ancestors, it also ensured that a man would meet with success in finding a wife while at the same time guaranteeing his safe passage to the afterlife. Thus, the custom was considered indispensable to life and existence itself.

Among the Atayal, success met on the headhunt was deliberately marked upon the chins of warriors with tattoos. And those headhunters who acquired more than five heads using old weapons, like a curved machete-like knife, might also have their chests tattooed or the backs of their hands. Among the Paiwan, it was believed that the spirits of ancestors dwell in these beheading knives, which were held in the possession of the tribe for several generations. However, the Paiwan were not necessarily tattooed after having taken a head; instead, the successful warrior was also denoted by the wearing of a certain kind of cap which was made by women of the tribe. 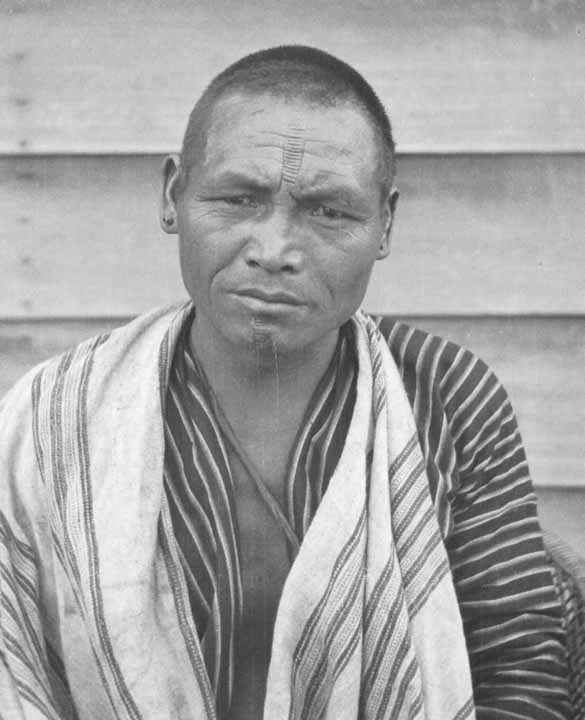 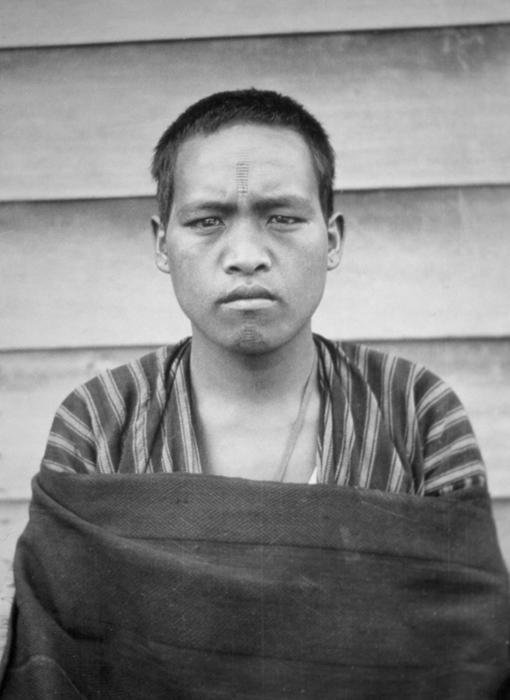 More generally, tattooing could also be administered to the foreheads of unmarried Atayal boys and girls in their teens. Apart from the tattooed foreheads of women, only those who were skillful in weaving could tattoo their cheeks and other parts of their bodies. 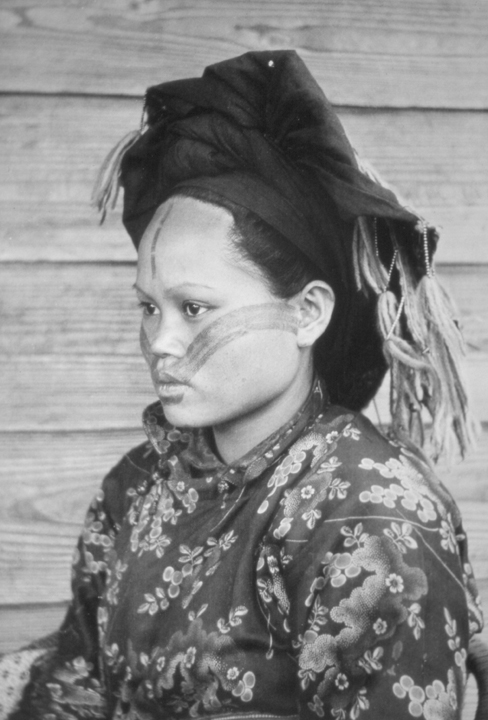 Besides the beautiful cloths they wove on the loom, Atayal women also manufactured net bags that headhunting husbands used to carry severed human heads. Next to his beheading knife, these bags were his most treasured possession.

It is not surprising, then, that the Atayal believed that only those women who were proficient in weaving (hence tattooed), and those men who were successful headhunters (also tattooed) could pass safely into the afterlife.

Atayal tattoo artists, called patasan, were women. They had to be of high virtue and most of them inherited their profession from their mothers, though some learned it by apprenticeship. Usually there were not many tattoo artists in any one particular region, so if one did not reside in an Atayal village, one was invited from the outside. Tattooists commonly charged a piece of cloth or two strings of beads for an individual’s first tattoo; but, for one who had married or committed adultery, she would charge more – sometimes one or two beaded skirts!

Tattoo artists first stenciled their designs upon the skin with a linen thread soaked in black soot. The tattoo instrument resembled a toothbrush with four to sixteen needles (atok) arranged in rows and fastened to a wooden handle about 1.5 cm in diameter and 15 cm in length. Before iron was introduced to the indigenous Atayal, thorns of orange or tangerine trees were used. The hammer, which pounded the tattoo instrument into the skin, was called totsin and was constructed of a single piece of wood about 2.5 cm in diameter and approximately 17 cm in length. Excess blood was removed with a scraper (quwar) made from a rattan splint that was bent and bound at either end with linen thread. Lampblack (ihoh) was used as pigment but occasionally soot from charred pinewood resin was collected, to be stored in a gourd or small iron case. 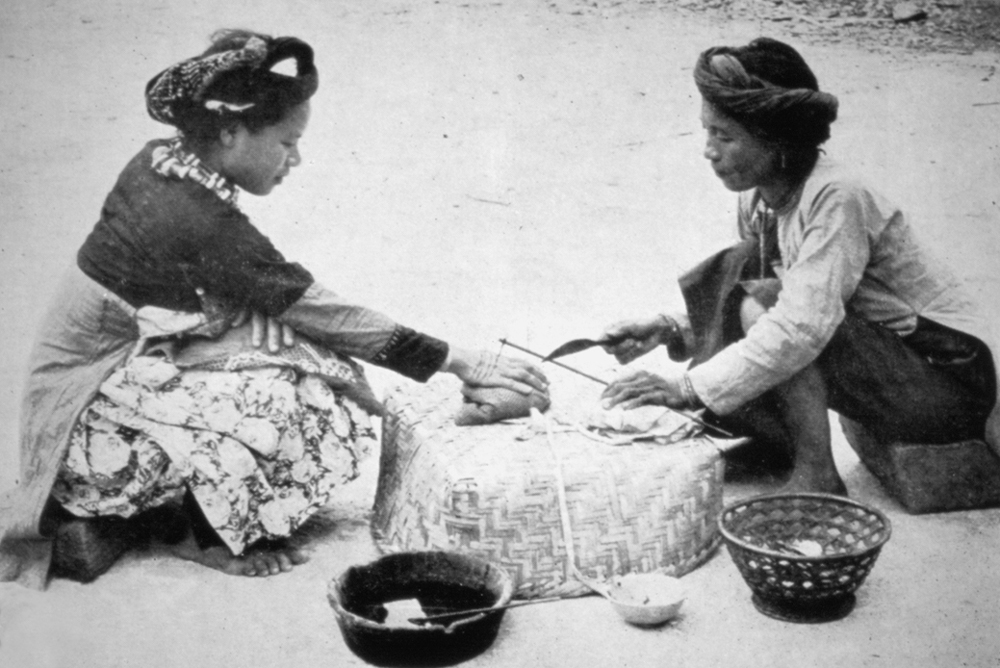 Tattooing operations were almost always performed in a small hut located away from the living quarters and most tattooing took place in winter, since the cold weather was believed to facilitate the healing of the tattoos and prevent scabbing. Interestingly, the Atayal linked scabbing to the lack of virtue of the client! 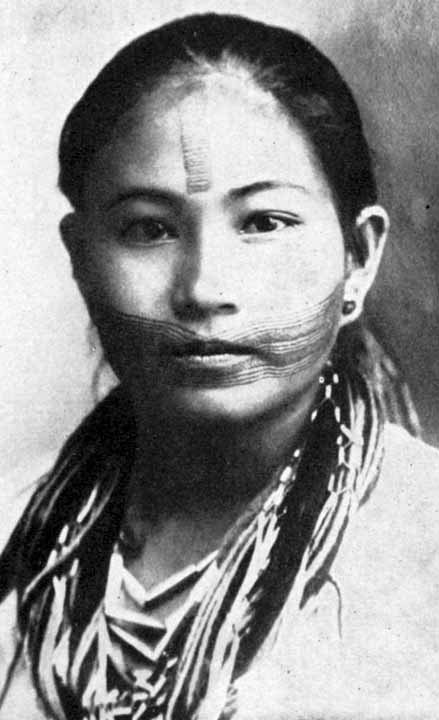 The tattoo client lay down with a folded cloth under her head. The tattoo artist usually sat on a low stool behind her or stood hunched over the patient with her tool. She took the needle instrument and knocked it home with several forceful blows of her hammer and scraped the blood-stained face with the quwar. Oftentimes a block of wood was held in the tattoo artist’s hand, and with this the tattooing implement was struck after it had been laid upon the area of application, because this action ensured a stronger blow and one more accurately placed upon the forehead. Afterwards the tattooist washed the hammered area and rubbed it with black soot.

The client prepared herself for the rite by observing various taboos before the operation including: no sexual relations, no drinking of any animal blood, and especially no wearing of red-colored clothing, since this was believed to cause her blood to flow unabated. The parents of the client chose a favorable day for the tattooing by dream divination, and on that particular day they observed various bird-omens and offered blood sacrifices to the spirits of their ancestors for a safe and successful operation. Bird omens were also consulted prior to most ceremonial occasions and especially before a hunting or war/headhunting campaign, because particular birds were in communication with the spirits of ancestors who, in turn, could guarantee glory in war, health in life, and fertility in agriculture.

Unfortunately, the major sociocultural institutions of the Atayal were not to last. Between 1920 and 1935, the Japanese initiated an island-wide program of forced relocation to control the Taiwanese aborigines and remove them from their ancestral lands: lands which were the basis of many inherited traditions that shaped social and life experience. For the Atayal, this trend was particularly disastrous, because their social structure was based upon the principle of gaya: where all of the descendants of a particular ancestor worked in common ritual and labor as a social and economic unit. As family members became dispersed across the country, the collective structure of the gaya – marked by the sharing of good luck, disaster, labor, hunting, and prayer – soon collapsed. The disappearance of many other Atayal traditions soon followed, such as weaving, headhunting, tattooing, and the communal ownership of land. 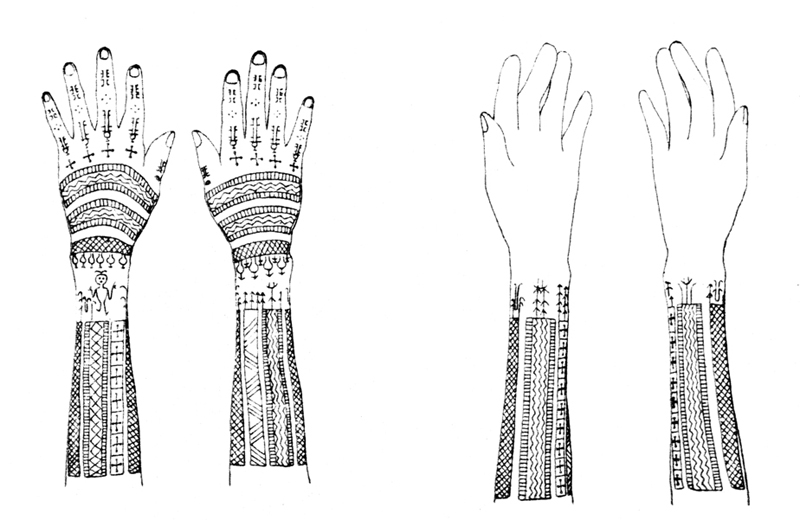 Today, the struggle over culture and land rights continues. Indigenous villages have been relocated by the government without consent to build dams, airports, and national parks: forests where it is illegal for indigenous peoples to hunt or fish in their traditional territories! However, the Taiwanese Council of Aboriginal Affairs has begun studying the possibility of creating autonomous regions for aboriginal peoples in several parts of Taiwan; regions where indigenous peoples (Yuanzhuminzu) will have an active role in the preservation, sustainability, and governance of their lands and culture. 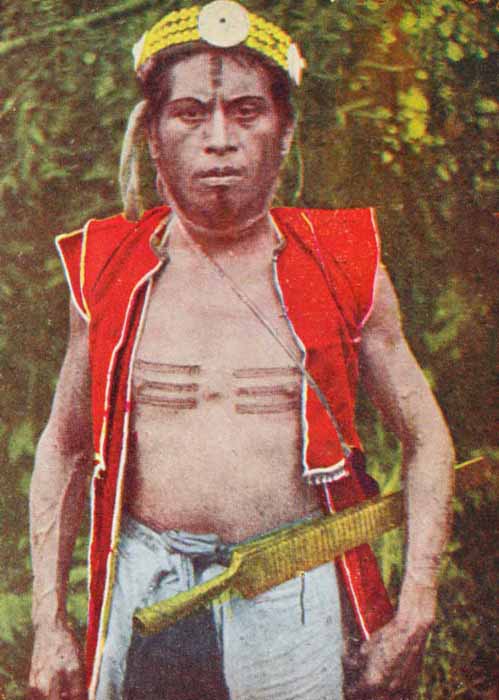