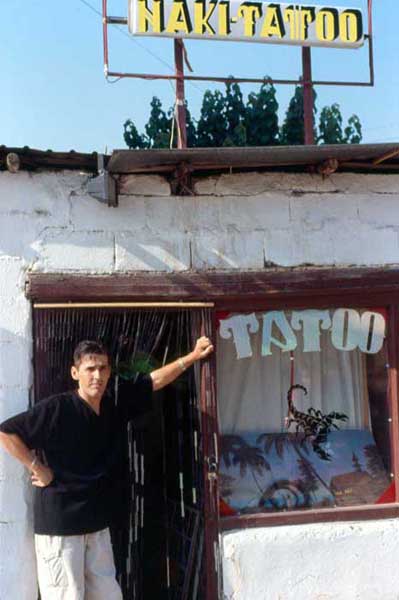 Naki outside of his tattoo shop in Prizren, Kosovo.

THREE SERBIAN SOLDIERS and a Russian mercenary burst into my tattoo shop just before closing time. I told them I was closed, but the Russian (I will NEVER forget his face) clicked the safety off his Kalashnikov, burrowed it into my forehead and said, “I’m gonna blow your fucking head off…so get to it!” I nearly dropped a load right there and thought I was gonna die. They were so stinking drunk, and they said they were gonna rape my wife and kill my son if I didn’t tattoo them, then and there. What could I do but say “YES!” And when they left, “Have a nice day!”

Before that near fatal day in the summer of 1999, Naim “Naki” Krasniqi was doing regular business in his little tattoo shop in Prizren, Kosovo. “My shop was open all the time, until NATO started bombing. In the beginning, the Serbians were coming in here and paying for their tattoos. But then they began forcing me to tattoo for free. They were not paying me. They began threatening me and my family. When I was away from the shop or out of town, they would tell my family that they would burn my shop to the ground, and after that Russian nearly blasted my brains all over my flash sheets, I was forced to flee to Albania. I left everything, and we ran. We were there for two months, and when we returned, the entire shop was destroyed. My flash sheets and paintings were thrown away, and the Serbs marked the walls with graffiti of their secret-service insignia and crucifixes. I immediately began to rebuild and work again with the help of my family and neighbors. We do not have words to express our feelings about what happened during the war. We suffered so much, and there are moments that we cannot forget.” 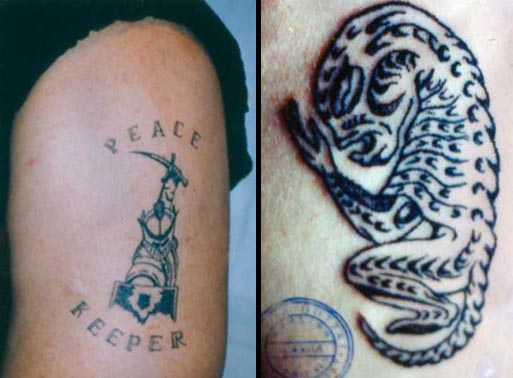 ‘Peace Keeper’ tattoo and another recent work by Naki, 2001.

Today, the only soldiers that visit Tattoo-Shop-Naki are NATO peacekeepers and other internationals like myself, who were in Kosovo to assist in nationwide elections. Ethnic tensions between the small Serbian and larger Albanian population still flare in the Prizren region, and it is not uncommon to hear daily reports of grenade attacks and re-mining activity in farmer’s fields. Most people are lucky to loose only a limb and escape with their lives.

Naki’s shop is hidden in the backstreets of Prizren, hedged in by razorwire, a ruined Serbian church, junked cars, and a German military checkpoint. Although this city is on the mend – humming power saws, pounding hammers, and whirring drills are constant companions  – the aftermath of war is only footsteps in any one direction. Faded, scorched, and debris ridden buildings serve as concrete reminders of the gaping holes ripped into the heart of this fledgling nation.

Naki is renowned all over Kosovo for his work. Although his competition is slim – a few young amateurs in the capital of Pristina – customers flock to his little shop on Rruga Shtefan Xheqovi 40. One man from Pristina arrived during my interview and mentioned the fact that he had seen the work of a tattooist in his hometown. “That guy just doesn’t have the quality, and Naki is truly a professional. I drove two hours to get here just to see if he could give me my first tattoo – Taurus, my birth sign.” Even though Naki couldn’t tattoo it that day, the client from Pristina reported, “I will come back tomorrow, because Naki is famous and I can trust him.” 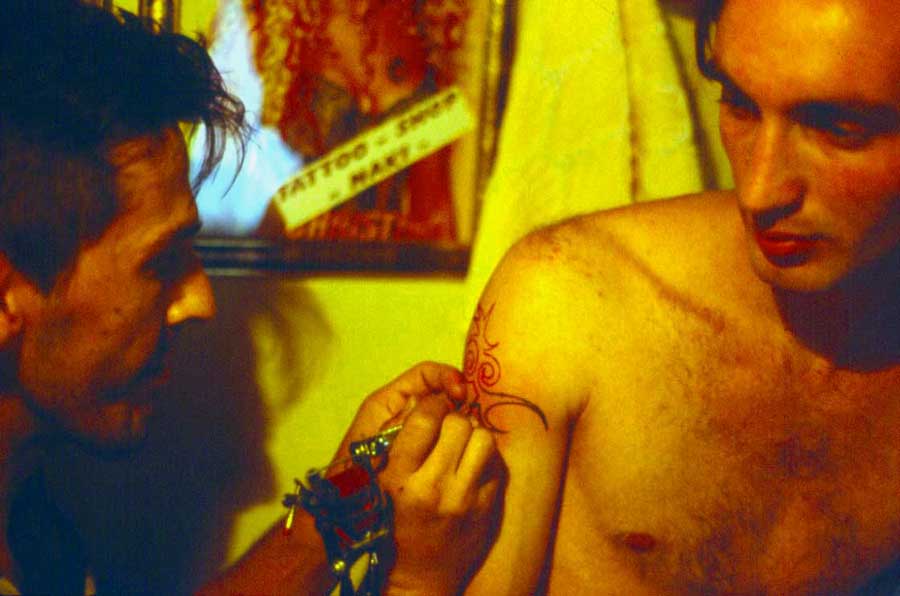 Fatos, from nearby Gjakovë, was receiving his second tattoo when I arrived, an abstract tribal design. He waited one year for his new ink, since money is difficult to come by for most Kosovars. Although this is a Muslim country and traditional Islamic religion forbids mutilating the body, Fatos is not a strict fundamentalist like his brother; a man who prays at the mosque five times a day. Rather, Fatos is in step with the “hip and cool” crowd that comprises the modern tattoo community in Kosovo today. He said, “Of course, I want to be cool, and that’s why I like tattoos,” but not in the Western sense depicted by the media. “I don’t smoke, I don’t take drugs, and I don’t drink alcohol. I only drink Coke, so I think it’s okay that I have tattoos on my arms.”

Naki agrees with Fatos that tattoo is not a religious barrier. “It is an art, and this is why people come to my shop. No one has the right to interfere with someone’s personal right to be tattooed. This is why I do not influence my clients on which tattoos to choose. I respect the faith, and I also adore life, but modernity is changing the attitudes towards Islamic religious fundamentals. Men wear shorts today and expose their chests, whereas in the past, exposing these body parts was forbidden. So, are these people and those that tattoo sinners? I hardly doubt it! For me, and on my name, the most important things in life are: not to injure another; to have a pure heart; and to help the weak in your community. In all religions there are precepts, rules that forbid certain actions. Perhaps, one person in 1,000 follows these rules to the extreme. I respect that and my faith also.”

The Sinan Pasha mosque in Prizren was built in 1600.

And maybe when that old man leaving the mosque stopped Naki in the street and asked him if he was the tattoo guy, and said, “Have you ever thought of what is going to happen to you in the next world for your tattoo work?” Naki replied, “Old man, have you ever sinned in your life? Are you so pure of heart?” And as the old man paused and began to smile, Naki added, “Good. We will all suffer together, you and I,” and then both let off a cheerful laugh!

“Before I became a tattoo artist,” said Naki, “I worked as a nurse for 11 years, where I learned the consequences of infectious diseases and their prevention. In my spare time, I also painted landscapes, something that I enjoy today. In 1990, I began as an apprentice to a Hungarian tattoo artist in Vienna. I worked there for two and a half years. In 1992, I returned to Kosovo and started my shop that year in Prizren. Tattooing is an art form for me. It speaks of the moment, and the aesthetics are the most important element.”

“In the beginning and up until three years ago, I worked by hand with a “shotgun” made from the motor of a cassette player, which didn’t have much roll. I first experimented with tattoos on my body, the first of which is a colored rose on my abdomen. Two years ago, with the help of my in-laws in Germany and friends in France, I ordered more modern equipment, including a Cobra tattoo gun and hundreds of needles. All in all, this cost around $900 U.S., and it took one and a half months to complete the order. Today, however, I am having difficulty ordering supplies, because my in-laws and friends in other European countries have relocated. I would really like to order more tattoo magazines, books and flash sheets. Some of the international clients who come for work promise to send these supplies, but they usually never deliver.” 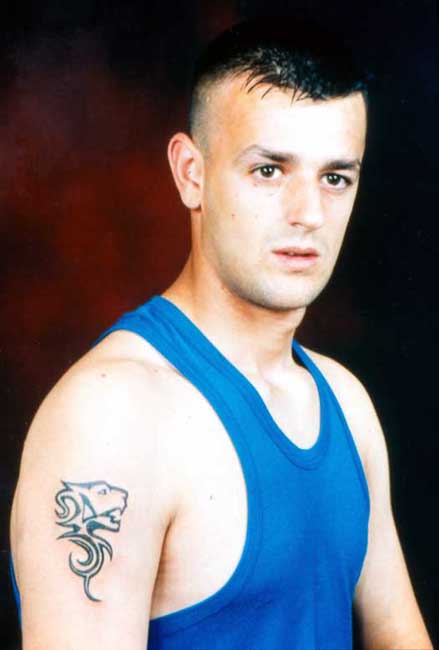 “I am open Monday through Friday ten a.m. until midnight, Saturdays and Sundays by appointment. I am so busy, that I cannot answer all of the requests. They come from all parts of Kosovo, including members of the Kosovo Police Service, civilians and members of the multinational military force KFOR (the Kosovo Protection Corps). I tattoo almost as many men as women, which is interesting for a Muslim country. Usually, I take five or six clients a day. I prefer not to work any more than this because you get tired mentally, no matter that I adore this work.”

“I have two guys that work as my students right now. I give them a salary, I pay them. They wait on customers, they take care of the shop and learn the techniques of the art. I really hope that they will someday open their own shops, but some people are not born for the art, they do not have the talent. Either way, I would be happy to help them to the maximum, if one of them is capable. Although my students see that I have plenty of work, maybe they don’t feel comfortable working the skin. But with this profession, they can have a luxurious life and earn a lot. Unfortunately, until now, I have not had any students with the talent, but there is a young amateur working in the capital, Pristina. He visited me before he opened his shop, and I provided him with photos and some flash art. He came to ask about the secrets of the tattoo profession. I don’t mind the competition. In fact, I would be very happy to see more shops opening in Kosovo. But a tattoo artist should be talented, to become one with the art.” 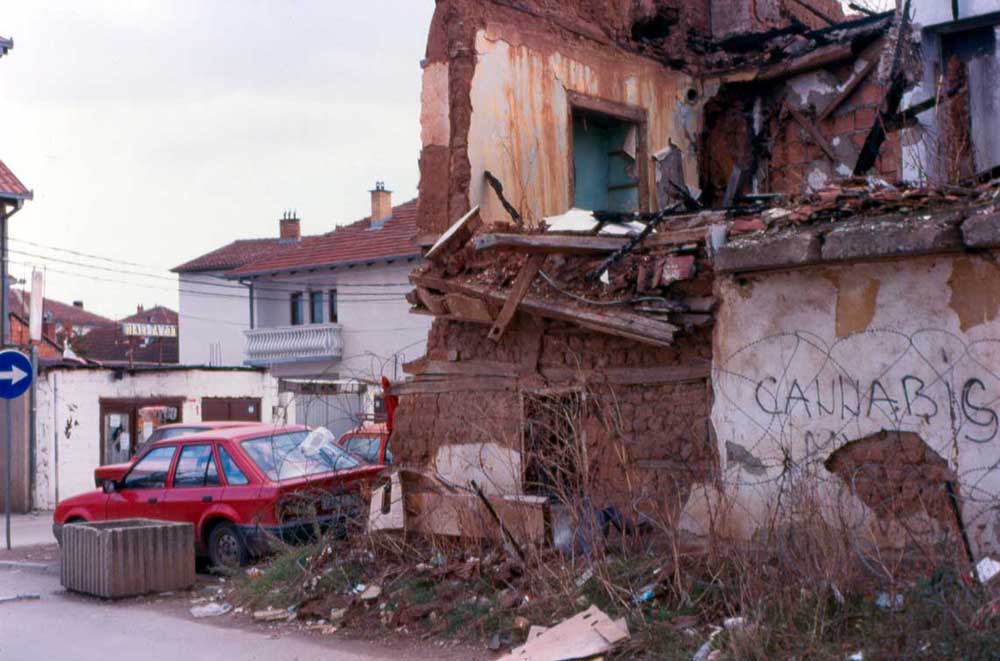 “Hopefully, if business continues to be good, I would like to add a second floor to my shop here in Prizren and use the present space as a waiting room. The second story would be brighter with more natural light. That’s the way it should be. I have one son, and if he takes my advice, I would love for him to graduate from college, and apart from that, to take up tattoo artistry as a profession. I would love for him to do this. But the most important thing is that I hope God will give him the talent. And also it has to be within his will to do so. I will not oblige him. He must have his own mind. It’s wonderful when your children inherit your profession. It’s extra special, and I would love for anyone in my family to inherit it as well.”

The Holy Archangel Monastery, just up the Bistrica River gorge from Prizren, was built by Tsar Stefan Dushan of Serbia in the 14th century. Sinan Pasha’s mosque was built from its stones. Prizren landscape. The town took its current name in the 11th century and today boasts a population of approximately 90,000 inhabitants. Prizren is astonishingly rich in historic buildings and is great for a walking tour.

After my five-month visit, I just couldn’t leave Kosovo without getting a souvenir from Naki. Of course, since there is little electricity these days, it took some time and patience. “I have to go outside to start the generator, come back in, wash my hands and change gloves,” Naki tells me. “If the generator breaks – as does everything else in Kosovo – you might be here for some time.”

With that in mind, I quickly proceeded to kill four tall boys of the local brew while awaiting the pleasure of getting inked by Kosovo’s best. And as I walked out the door for the last time, a group of Russian NATO mine sweepers came into the shop. I have to admit that they seemed a bit scared. Naki didn’t look too pleased, but he obliged them.

Naki’s tattoo mannequins, top, in his studio. The old tattoo price list above his head in Albanian. Naki’s tattoo work is largely figurative, patterned after flash sheets scattered around the shop or displayed on mannequins. He is studying more tribal designs, especially arm bands, because these are becoming more popular in Kosovo.