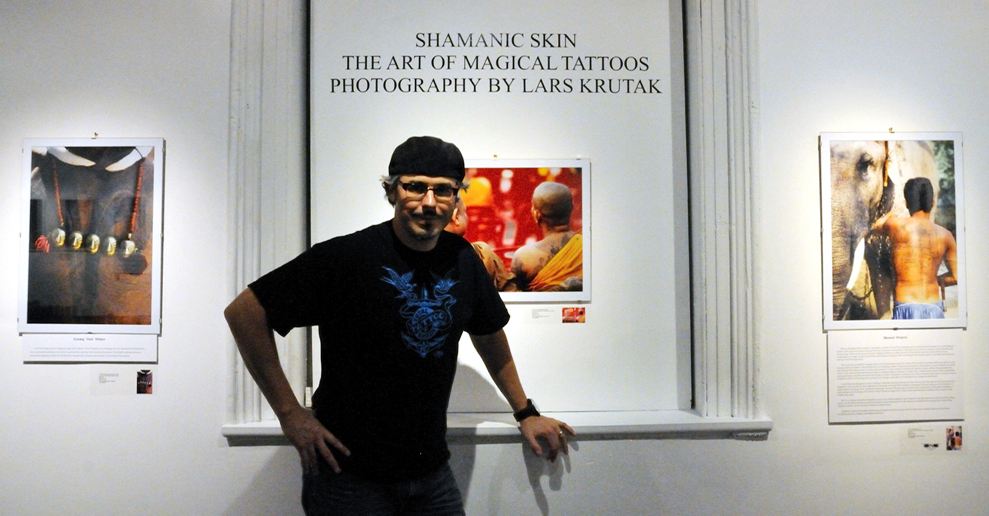 As the old saying goes, anthropologists do it in the field! And in order to properly document indigenous tattooing in all of its many forms photography is a must, especially when you create coffee table books.

I am a largely self-taught shooter… well, my dad gave me some instruction when I was kid! And when there is no electricity or generators around, I always bring a mechanical camera in case I can’t charge the batteries on my Nikon DSLR. To tell you the truth, most of the photos on this website are slides made with the sturdy Nikon Fm3A – it has never failed me whether in the jungle, swamp, or searing heat of the desert. I prefer natural light and I am always searching for unique angles to shoot the portraits I create.

I am passionate about photography and I try to reach as many people as I can with my exhibitions, such as Shamanic Skin: The Art of Magical Tattooing which has traveled the world. Shamanic Skin has now visited London, Florence, Kuching, New York City, Melbourne, Brussels, and Frankfurt.

My photography on exhibition at the Eretz Israel Museum in Tel Aviv, October 2016. Courtesy of Leonid Padrul.

I am very active as a Curator and Curatorial Advisor for major museum exhibitions. A short-list of recent projects are as follows:

(May 6th to July 30, 2014). Curator of Photography. Slought Foundation and University of Pennsylvania exhibition, Skin: Totem and Tattoo. Philadelphia, PA. 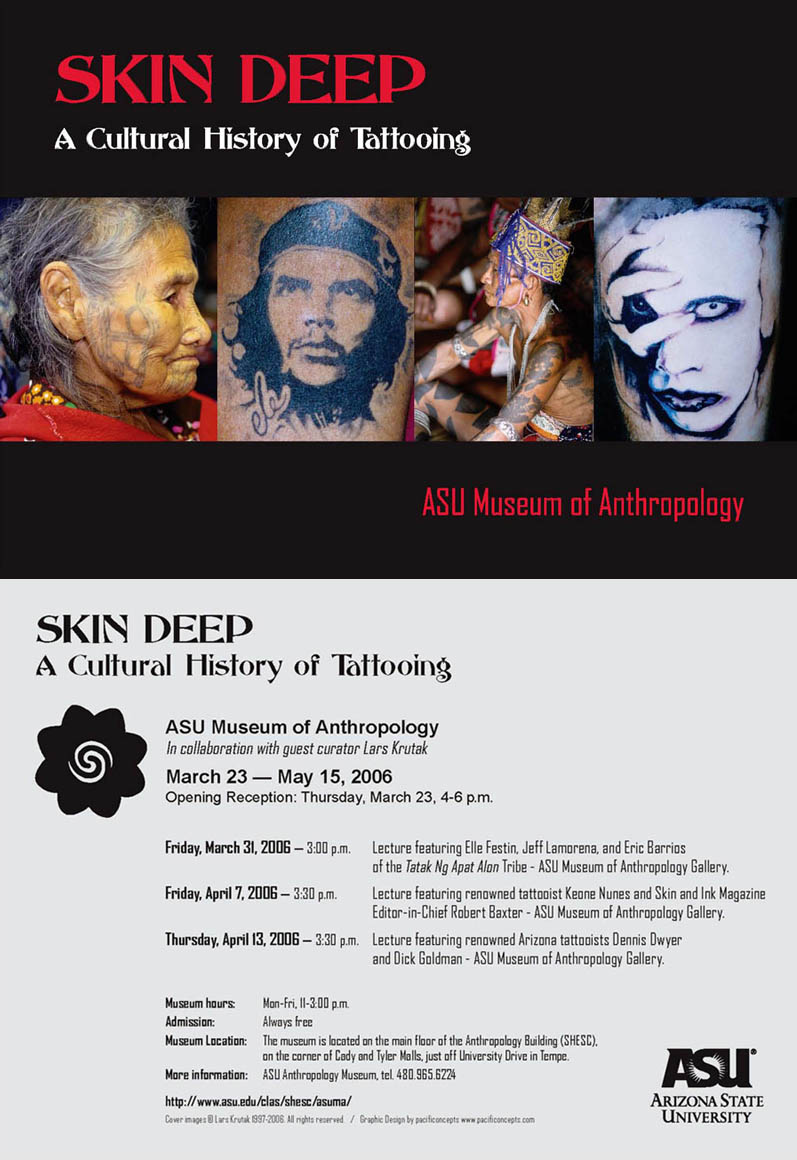 Every month or so I will offer a special 11×14 signed color image in high resolution that captures the essence of the world’s body art culture. (NOTE: Larger sizes can be made available.)

If you are interested in purchasing this featured fine art print, please email me at the address below.

Some of the images seen on my website, in my books, and exhibitions are available for sale as limited numbered and signed quality prints. Please email me with inquiries, size and price quotes:

Here’s the testimony of one satisfied customer:

Please also email me for traveling photography exhibitions for Galleries, Museums, Conventions, and other Special Events. 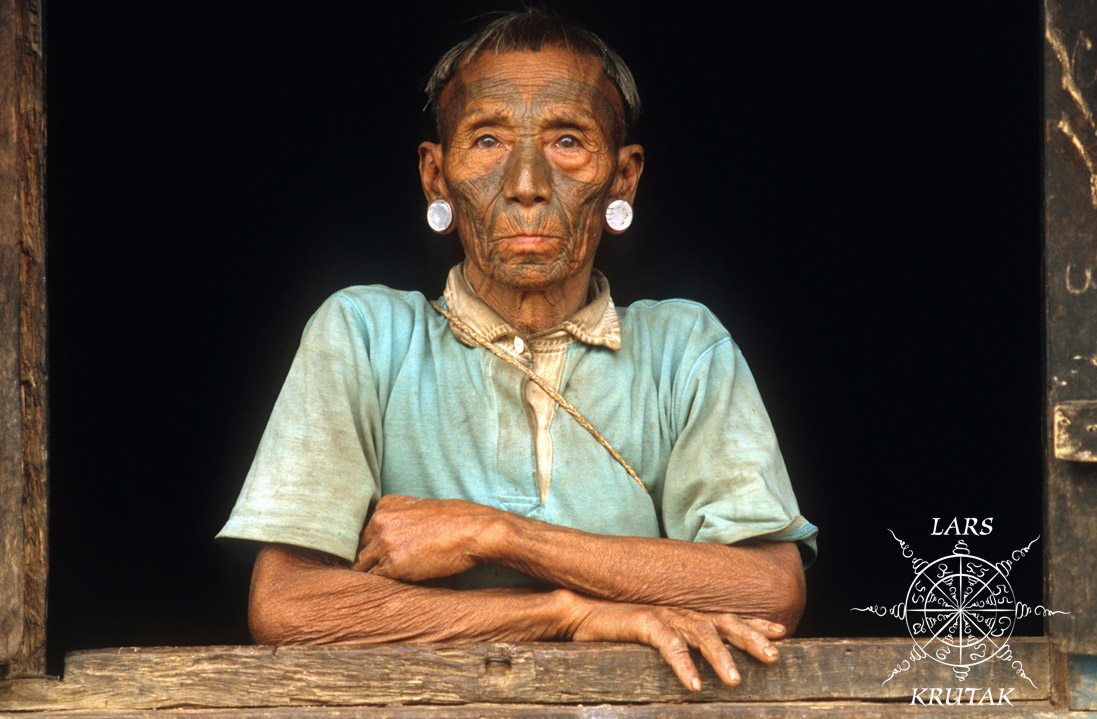 The exhibition SHAMANIC SKIN has been a great international success and I would like to share a small portion of it here in the exhibition gallery that follows below! The original exhibition featured 30 large format images drawn from 17 years of fieldwork with tattoo tribes of the world. I will feature new exhibitions in the future so please check this page for updates and new installations.

In 1777, the word “tattoo” was defined as “an indelible mark or figure fixed upon the body by insertion of pigment under the skin or by the production of scars.” For thousands of years before that date, however, indigenous peoples practiced various forms of tattooing and scarification not only to beautify themselves or mark significant life achievements, but also to please or seek protection from particular spirits which inhabited their world.

Anthropologist Dr. Lars Krutak has traveled the globe meeting indigenous people to learn about their unique tattoos and the religious beliefs behind them. His photographic exhibition focuses upon the deeply spiritual realm of tattoo through an examination of body modification rituals worldwide. The intended result is to establish new ways of seeing and reading the messages encoded in tattooing and scarification practices and to document them before these ancient traditions disappear from view. 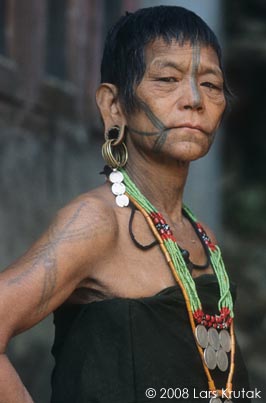 TATTOOS FOR THE AFTERLIFE. Laju Naga women living in the state of Arunachal Pradesh, India, possess facial and other body tattoos that are sacred symbols. Women of the neighboring Wancho Naga tribe do not have their faces tattooed, but sometimes they wear intricate markings on their legs, arms, chests, and navels, with each symbol being placed on the body at certain life events (e.g., adulthood, marriage, childbirth). In other Naga regions, women believe that their tattoos can be used as currency to purchase provisions after death as they travel into the afterlife. For the Laju and Wancho, however, it is said: “Our ancestors will only recognize us after we die because of our tattoos.” 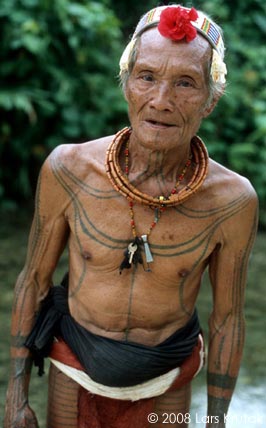 SHAMANIC SKIN. The Mentawai people of Siberut Island, Indonesia, believe their bold body tattooing keeps them in harmony with the universe and the spirits that govern it. All Mentawai shamans, like Aman Toshi who is 80-years-old, must be tattooed so they are more beautiful and recognizable to the spirits with whom they communicate on a daily basis.

The intricate tattoos that appear on the wrists of the Mentawai are called ngalou or “beads,” but this word also means “talisman.” Like the Kenyah and Kayan of Borneo, these markings are believed to “tie in” the soul and keep it close to the body. The rosettes (sepippurat) or sunbursts tattooed on the shoulders of some men and women symbolize that evil should bounce off their bodies like raindrops from a flower.

FERTILITY POWER. 92-year-old Whang-Od of Buscalan village is the last Kalinga tattooist. Traditionally, Kalinga tattoos were believed to increase a woman’s fertility and cure ailments such as goiter, cholera, and skin disease.

When tattooing warriors, Whang-Od utters a chant so that no spiritual harm would come to her client. She also observed certain taboos and did not drink any alcohol the night before the tattooing. If she did, the tattoos she created might become infected and her client could even die. If she or her client sneezed before the tattooing began, this was considered a very bad omen and she would stop her work. Whang-Od told me: “It is believed that a lurking spirit makes someone sneeze because it is jealous or has deemed it wise to postpone the tattooing for a future time.” 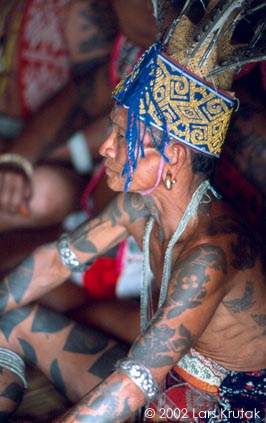 MAGICAL PROTECTION. This WWII veteran was one of 55 Iban Rangers from the Skrang River region that fought for Allied forces against the Japanese in Sarawak, northern Borneo. Armed with a mandau sword, blowgun, and spear, he bravely fought Japanese soldiers armed with heavy machine guns and grenades. But his tattoos offered him magical protection.

Maung, who was a fellow Ranger and the last Iban tattoo artist of the Skrang, created tattoos for many men in this special unit. His tattooing inks were “magical” because his protector spirit led him to a meteorite in the jungle which he later dipped in every batch of tattooing pigment he ever made.

Maung told me his tattoos protected him from Japanese bullets: “They just went around and through me and I was never wounded.” 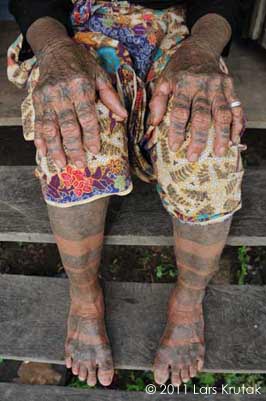 SOUL POWER. Kenyah women, like their Kayan neighbors, were extensively tattooed on their hands, arms, feet, and legs. One of the most powerful Kenyah tattoo motifs was the lukut or “bead” design, resembling a sunburst or star. This powerful tattoo was worn on the knuckles, wrists, or forearms, and was believed to keep the soul from wandering away from its human host. 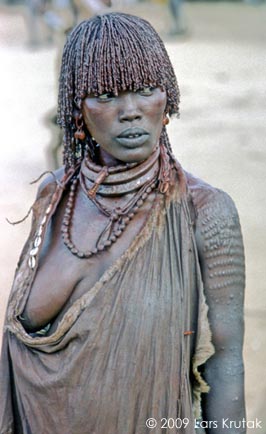 ETERNAL BEAUTY. The Hamar are semi-nomadic pastoralists who live in the Omo Valley of southern Ethiopia. One Hamar woman named Gule stated, “When you bleed, you lose weight and become weak. But the women still get scars, not because we are forced to, but because we want to and it makes us beautiful.” Hamar women believe their permanent beauty marks have the magical power to attract a husband. Many Hamar men told me they wouldn’t marry a woman unless she was scarified. 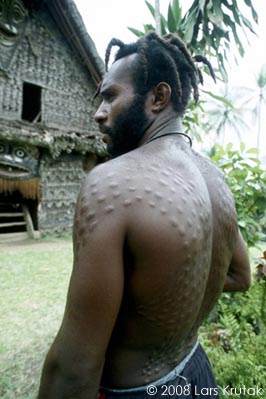 CROCODILE SPIRITS. The Kaningara live in the Blackwater lakes region of Papua New Guinea. Long ago, a crocodile spirit adopted one of their culture heroes, Marsivo. The spirit told Marsivo if Kaningara men began to skin-cut themselves in his likeness, they would absorb some of the crocodile’s power and become the strongest and most powerful people in the Blackwater region.

Today, the Kaningara say during the cutting that the crocodile spirit “eats your body” because “we see each cut as a crocodile tooth biting into your skin. And when you are done, you will feel like a big crocodile is lying on you and then you will become a man.” ANCESTRAL TIES. The Bétamarribé of Benin and Togo are considered to be the masters of West African scarification. One elder stated: “It’s our property, our tribal design. And when placed on the stomach and face it is to beautify ourselves. Scars give us good health and in the past it would be difficult to find a man or woman without them. Women who had scars would have many children and women who did not have them would have few. We make these markings to have a long life and to please the spirits of our ancestors.”

BAPTISM IN BLOOD. A tattooed Phom Naga warrior of India told me when you kill an enemy his blood begins to pollute you. But when you receive a large tattoo, such as this V-shaped chest marking, it is believed the residue of this dangerous substance is permanently released from the body and a man becomes pure again. Bold chest markings were also believed to magically transfer the fertility that emanated from severed enemy heads into the body of the tattoo bearer. 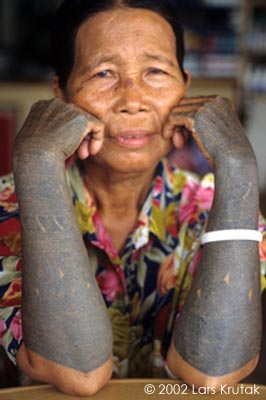 FLOWER POWER. Kayan women of Borneo were tattooed on their forearms with hornbill, “shoots of bamboo,” “guardian spirits,” “dragon-dog,” and tuba root motifs that were believed to repel evil spirits encountered in the jungle. Floral imagery, symbolizing spiritual powers and relationships, permeated every facet of Kayan life and was also tattooed on the backs of women’s hands and fingers. For the Kayan and other indigenous peoples of Borneo, plants were regarded as a major kind of living thing, sharing the same fundamental properties of life and death as humans.