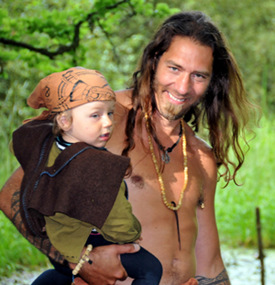 Colin Dale with his son Loki.

FOR ALMOST FIFTY YEARS,the skin-cut tattooing customs of the Makonde people of Mozambique have nearly faded away with the last generation of elders who wear the bold designs called dinembo. On a recent trip to the Makonde plateau, I lived and worked with one of the last dinembo masters, an 89-year-old man named Pius who is affectionately called Nãuka or “switchblade” for the tool he used to wield. Pius told me that he was “forbidden” from tattooing any more local men or women in 1962 because the Makonde were one of the first groups to bring arms against the ruling Portuguese during the Mozambican Revolution, and “if the Portuguese troops saw your facial tattoos, they knew you were Makonde and they would kill you!”

Traditionally, Makonde men and women received facial tattoos at puberty and before marriage. Oftentimes these designs consisted of a series of stacked chevrons called lichumba or “deep angles.” Incisions were made with a knife-like iron instrument called a chipopo and vegetable carbon from the castor bean plant was rubbed into the incisions, producing a dark blue color. When the extremely painful facial tattooing was executed, boys and girls were sometimes buried up to their necks in the earth so that they would not flinch as the tattooist cut open their living flesh. For the Makonde, facial tattoos were not only symbols of great courage; they were also the truest expressions of Makonde tribal identity itself. 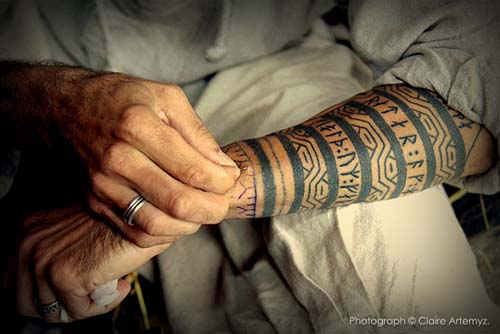 Mr. Dale demonstrating the art of skin-stitching on his arm. Photograph © Claire Artemyz. 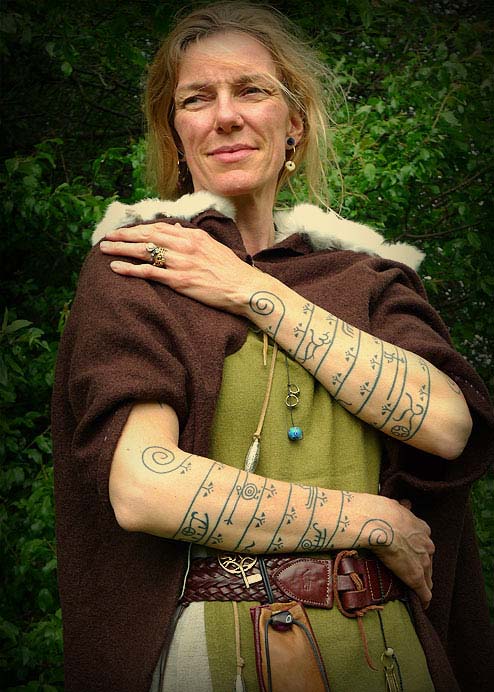 Enter Canadian-born tattooist Colin Dale. It is August 2009, and Julia Machindano, a Makonde student living in Denmark, visits Dale’s old tattoo studio Kunsten pä Kroppen (“Art on the Body”) in Copenhagen’s town center. Colin, who has studied and mastered many of the oldest traditional tattoo methods, has won numerous international awards at tattoo conventions for his bold pointillinear Dotwork designs that are created through various techniques and devices including hand-tapping, hand-poking, and the ancient Inuit art form of needle and thread skin-stitching. Drawing much of his inspiration from ancient tribal petroglyphs, pictographs, runes, and Viking symbolism, Colin describes his body of work as “Neo-Nordic” which is an increasingly popular tattoo style in northern Europe because it connects Scandinavians and other people with Nordic roots to their mythological past.

The Neo-Nordic genre of tattooing is not only popular amongst the younger crowd, but also the older generations as well. In fact, Colin may hold a world record in this respect because in 2009 he helped commemorate 103-year-old Karen Larsen’s birthday in Denmark with her first tattoo; a traditional Nordic design on her finger believed to embody natural forces and energy. Of course, even the Icelandic singer and actress Björk wears a rune tattoo called the vejviser or “compass” which has undoubtedly guided her to worldwide fame and fortune. 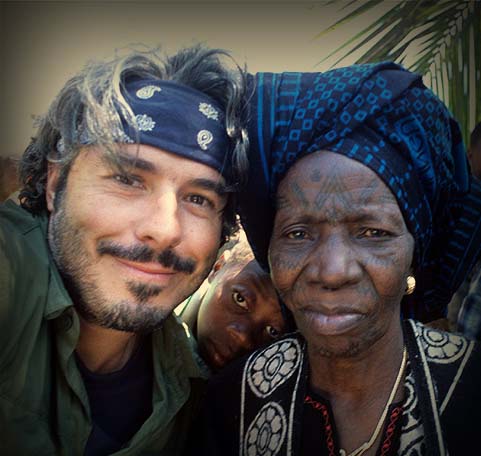 When I asked Colin about his preparations for Julia’s dinembo, I was curious whether he had also tinkered with the skin-cut tattooing techniques of the Makonde.

He said, “At first, Julia wanted me to cut the tattoo lines into her forehead with a scalpel which is similar to the chipopo tool that the Makonde used. Although I would love to do a skin-cut tattoo, my precision with hand-poking tools is much greater so we came to an agreement. Obviously any facial tattoo is a serious commitment because you are changing the way a person is perceived by the outside world, and something of this magnitude deserves my best effort. For this reason, I used a hand-poking tool which I can manipulate as well as a machine. But it also has a more traditional and spiritual feel which an electric device cannot deliver.”

Mr. Dale continued: “As you know, tattooing the face and hands in Denmark is illegal. But when Julia came to me and said she wanted to get tattooed to honor her recently deceased mother, her Makonde heritage, and her husband before she gets married later this year, sometimes you have to bend the rules just a little. Because culture which doesn’t move forward eventually dies.”

Neo-Nordic tattoos by Colin Dale. The leg tattoo was hand-poked.

After Julia approached her fiancé with the idea, he consented and she said “that alone was like music to my ears! This tattoo is more than just a few markings on my face because it symbolizes my peace of mind and personal freedom. I see my sisters and other Makonde women of my generation drifting away from this beautiful ritual tradition which is tragic. I deeply admire the tattoo customs of my people and it was one of the many vehicles that they used to express and explain the ascending ladder of life and the relationships between the spiritual and physical world. The markings that I am about to receive not only symbolize the love I have of my people; they are also considered to be fertility symbols by the Makonde and designs that will protect me from spirits and other forms of evil.” 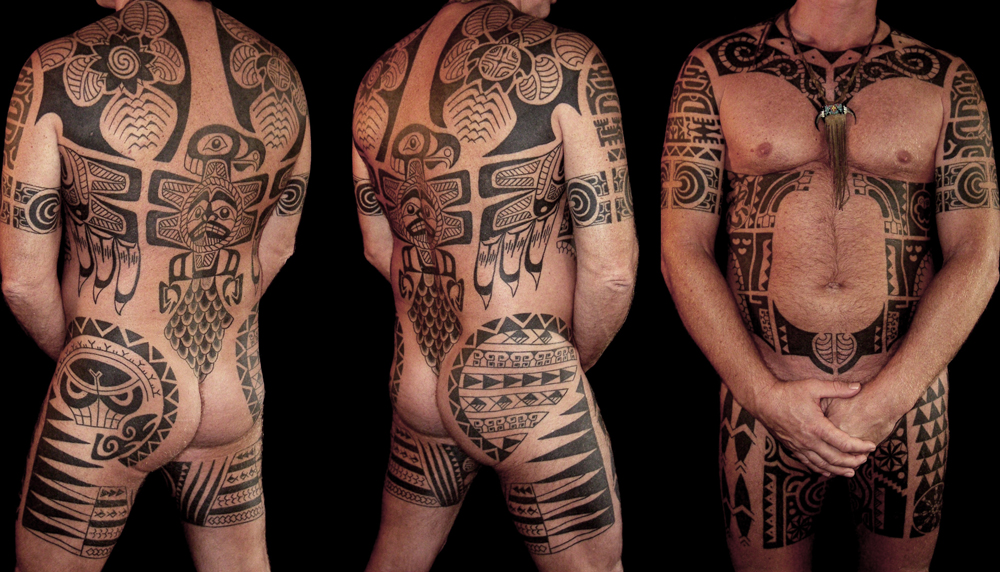 “When tattooing was commonplace among the Makonde, the ritual took place at the same time as a girl’s initiation. And both of these rites were performed before a girl was to be married. These rituals were extremely important because as symbolic acts they separated a woman from childhood and her father’s house. In turn, they prepared the woman for her new life as the wife of her future husband. In this way, I really wanted to get my tattoos before I took my wedding vows to solidify my commitment to my fiancé who is also from Mozambique.”

Julia told me that the tattooing was more painful than she expected. But “Colin quickly made me feel very peaceful and safe. I don’t think I would have felt the same way working with another artist. Plus, my fiancé was sitting right beside me holding my hands and I never felt so much love for him and from him. It was a very spiritual moment and I felt at one with everything around me. And when it was over, I felt reborn.”

In 2010, Colin and Julia will continue to work with each other so that he can complete the dinembo of her ancestors. What remains are several designs that will come to adorn her cheeks and areas below her eyes. This work will not be performed in Denmark because of existing laws prohibiting facial tattooing, and will instead take place in nearby Mälmo, Sweden which boasts an annual tattoo convention and “no limits” tattooing.

Colin has also opened a new tattoo studio in Copenhagen called “Skin & Bone”. The name is fitting because he inks many of his clients with hand-crafted tools made of antler and animal bone. 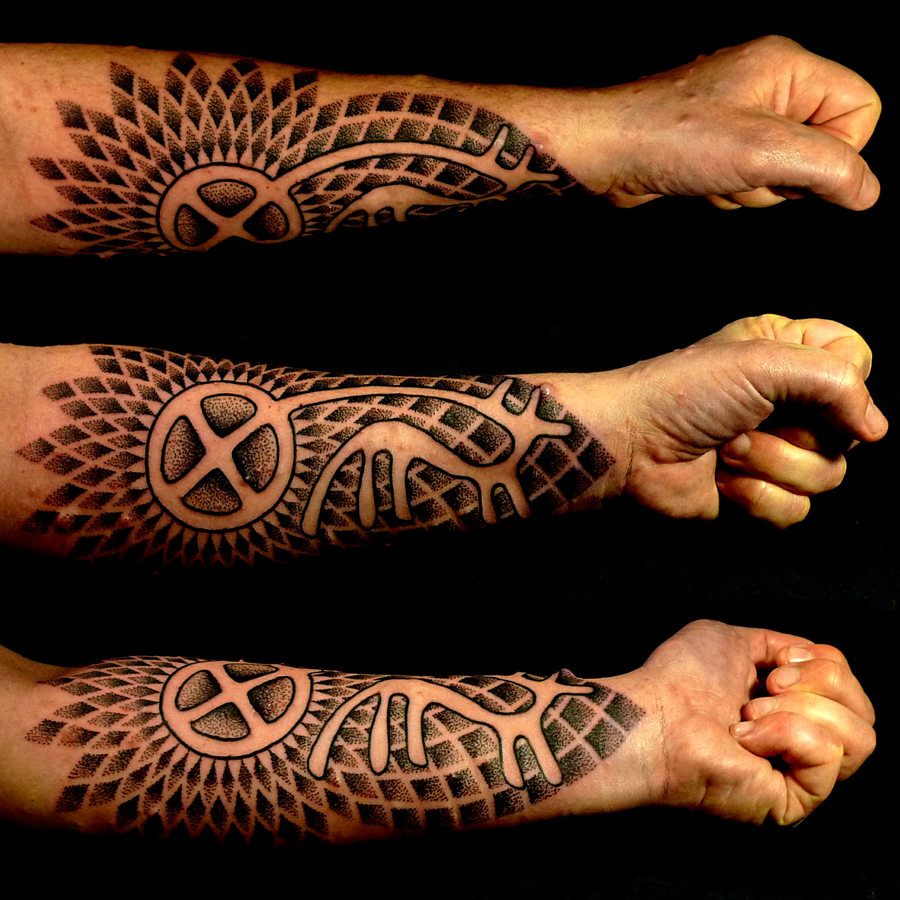 Colin says: “Many tattooists today try to push the envelope of art forward, but I look backwards to try and discover where tattooing came from, how and why it started, and what kind of tools were used thousands of years ago. That is why I use tools made from bone, flint, thorns, and also sinew thread when I am stitching.” 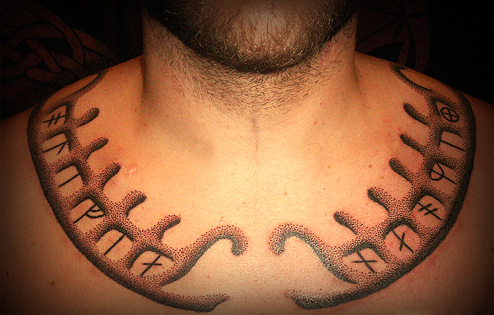 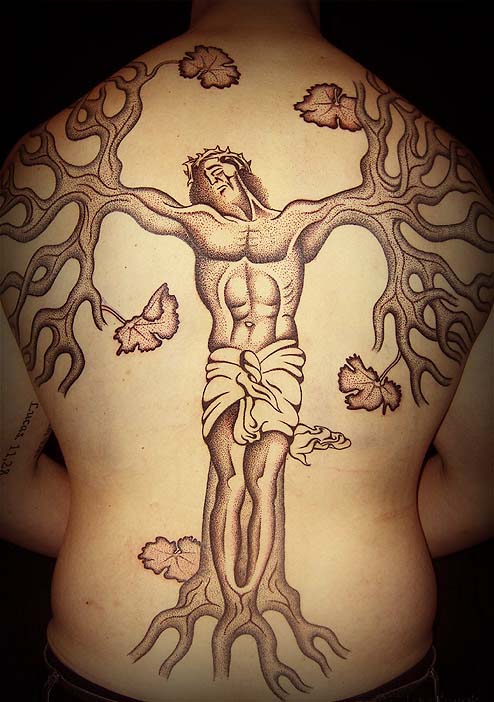 Yggdrasil is the immense tree in Old Norse cosmology on which the nine worlds existed.

Skin & Bone is a combination gallery and studio holding three to four exhibitions each year. The gallery not only showcases the work of international tattooists, but also tattoo writers and photographers through book signings and sales of select books that have recently hit the market.

“The gallery will exhibit art and ethnographic handicrafts related to tattooing, while the studio will have myself tattooing alongside various guest artists throughout the year,” he said. “Through my years of travelling and tattooing around the world I’ve had the pleasure to meet and work alongside a wide range of tattoo artists and experts working in ethnographic and other specialized styles. Amongst these friends, I hope to have hand-tattooists from Borneo, Polynesia and Japan as well as some of the world’s leading artists in Blackwork and Dotwork coming to visit.”

For more information on Colin Dale watch the History Channel’s documentary Ancient Ink or check out the new book Black Tattoo Art (2009) by Marisa Kakoulas that showcases his epidermic talents. You can also visit him online via:

And when you are visiting Copenhagen, definitely drop by his new studio which is located at: